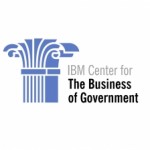 The IBM Center for The Business of Government connects public management research with practice. Since 1998, it has helped public sector executives improve the effectiveness of government with practical ideas and original thinking. It sponsors independent research by top minds in academe and the non-profit sector, and it creates opportunities for dialogue on a broad range of public management topics. The Center is one of the ways IBM seeks to advance knowledge on how to improve public sector effectiveness. The Center focuses on the future of the operation and management of the public sector.

The IBM Center for The Business of Government 4 years, 7 months ago.