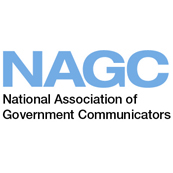 NAGC is a professional network of federal, state and local government employees whose primary role is communication, from speech writers and information officers to web designers and photographers.

Reinventing the Role of Government Communicators – A Collective Effort!