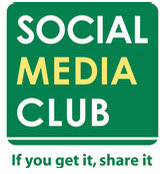 For members of the Social Media Club – DC Chapter. I figured it would be good to bring together those of us who are actively involved in both Social Media and the government.