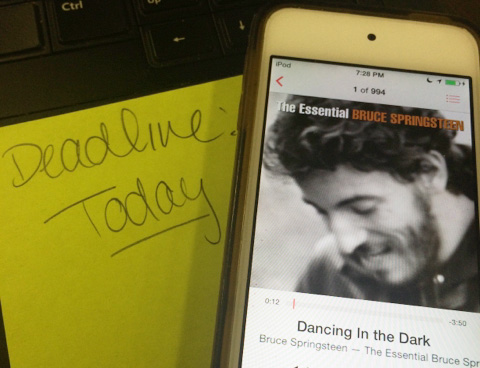 “Picture it: Sicily…” (If you get that reference, we’ll be best friends.)

But seriously. Picture it: You’re crashing on a big project. The deadline is coming up. You’re running a little behind. (This may be off, because you’ve probably got excellent time management skills and don’t know the meaning of the word “procrastination.”) You need to focus and get things done.

One of the best ways I find I can focus is to put in my headphones and rock out at my desk. I’ve got a few standard songs that I like to play when I’m really jamming on something.

“Maggie May” by Rod Stewart

“All I needed was a friend to lend a guiding hand.” Rod Stewart, you’re my guiding hand during this project. The riff at the end of this song is one of my favorites in all of classic rock. I’ve definitely considered making it my ringtone. (This video is my favorite because of Rod’s hair. It’s really quite epic.)

This has been my favorite Cher song since I saw her in concert at the Verizon Center last year during my first stint living in the DC area. That was the first time I’d ever heard it and it’s so empowering–especially when I feel like I’m never going to get a project done. It’s also one of my go-to karaoke songs and extremely difficult not to sing at my desk.

“If I could turn back time…” I probably would’ve procrastinated less! I work well under deadline pressure, but with that comes a lot of rushed things. I always say I’m going to start a little earlier, plan a little better…but find myself crashing. It works for me though. (This video is also one of my favorites–it’s really odd and caused some controversy when it came out–but that’s typical Cher! If you follow her on Twitter, you probably know she hasn’t changed at all since this era…still causing trouble!)

“Into the Groove” by Madonna

The title of this song probably says it all. I’m always looking to get into a groove and when I put this song on repeat, that’s definitely what happens. That and it’ll be stuck in my head for about two weeks after.

“Dancing in the Dark” by Bruce Springsteen

I can’t write a post about music without including Bruce Springsteen: my favorite artist of all time. I always find myself dancing in my swivel chair when this song comes on. Plus, I’ve always enjoyed the very young Courteney Cox at the end of this video. She’s got some sweet dance moves that I’m pretty sure translated over to her role on Friends.

“Sympathy for the Devil” by the Rolling Stones

One of the bands on my concert bucket list is the Stones. This is my favorite song of theirs, which I find myself air-drumming all the time. Doesn’t work well unless I’m writing in a notebook–with my drumsticks being Bic mechanical pencils.

“Miss Gradenko” by The Police

I won’t lie, I generally listen to the entire Synchronicity album since it’s my favorite Police album, but this is my favorite song off the album—which is the album “Every Breath You Take” lives on. It’s a lesser-known song, but it’s so good.

I’m excited… I think I’m going to listen to all of these right now.

What are your favorite songs to get you through the work day?

Those songs are so great I would end up singing all day instead of working!

Check out this song by Spoon – Fear the Underdog! https://www.youtube.com/watch?v=q1hZVDLkJDc

If it’s a stressful time? Green Day (worked really well for me during the dark time of three protests during a contract award) If I need to calm down from the stressful time? Annie Lennox (also worked well during aforementioned dark time). In general I keep the tunes on Random … and the mix really, truly fits that bill.

Thanks for sharing! You tend to trend a lot more retro than I do, although since my musical growth mostly ceased around the end of the 1990s, I’m not exactly on the cutting edge of music! I’m not sure if that is a byproduct of getting older or a statement about the general state of music quality over the past 15 years! 🙂

My “go to” songs are usually motivational and help get me through a workout at the gym, running, or work burnout. Here are 7 of them!

I listen to a lot of Queen! We are the Champions and Another One Bites the Dust are faves for getting me through a tough assignment!