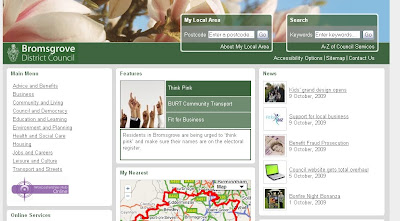 In the Twitter conversation it’s been pointed out that the common design fails some standards and a link to a policy document explaining what they’ve done in detail hasn’t yet been found (Cuddy is planning a story for PSF on Worcestershire’s move).

Also mentioned thus far is the obvious link to rationalisation and savings: centralised web teams. Also procurement savings on Content Management Systems (and is anyone really pitching the wonders of WordPress at local councils was my thought).

My first thought, though, was have they got the idea from the Singaporeans? People whose egov development is so good they are now seriously trying to export how they do what they do?

Singapore, Hong Kong, Canada (and NASA) all have what’s called a ‘common look and feel’ policy. This is a set of standards which all government websites are required to adhere to.

Here’s Canada’s policy, interestingly run out of their Treasury department:

Common Look and Feel Standards for the Internet (CLF 2.0)

The Common Look and Feel Standards for the Internet were approved by Treasury Board ministers on December 7, 2006 and are mandatory for all institutions represented in Schedule I, I.1 and II of the Financial Administration Act with a two-year deadline ending December 31, 2008, for the conversion of existing sites. Web sites launched after January 1, 2007, must conform to the new standards.

The Internet is an increasingly important communication tool providing an effective means for the public and the government to exchange information and for the government to offer its services in the official language and at the time and place of Canadians’ choosing. The consistent and predictable presentation of government services and content offered by Common Look and Feel standards facilitate effective online interaction.

The new Common Look and Feel Standards for the Internet were developed to reflect modern practices on the Web, changes in technology and issues raised by the Web community over the past six years as well as to improve navigation and format elements. The standards were rewritten to eliminate duplication and conflict with other Treasury Board policy instruments and were reformatted to improve their structure and organization.

Resources to implement CLF 2.0, including the template package, can be found in the Toolbox. A crosswalk table outlining the evolution of the policy requirements is also available on the Common Look and Feel Web site.

The Cabinet Office when drawing up its guidance (not ‘standard’, note) for government websites – Last Updated: 4/5/2007 – makes mention that EU policy has a recommendation for adoption of ‘common look and feel’ “in line with the Canadian model”.

But this is only placed within the context of accessibility.

In my experience there is very little interaction between UK egov and the world outside and what there is is limited to the US and occasionally the EU. It’s also my experience that the concept of a ‘common look and feel’ policy is practically unknown (though not entirely unknown).

Why aren’t we seeing examples from places like Canada, Singapore and Hong Kong at UK egov seminars and conferences? Wouldn’t it be useful for those in local government like those in Worcestershire to know that others have ‘been there, done that’ and ‘worn’, with justified pride, ‘the teeshirt’?