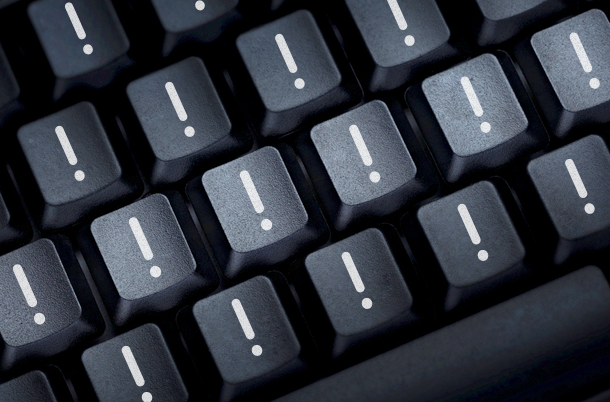 I’m guilty. I’m guilty of punctuation misuse. I use too many exclamation points in my business emails.

I specifically remember the first time I saw the overuse of an exclamation point in a work email. Like spotting a rare specimen of some sort, three of us huddled around a coworkers screen and just marveled at the uninhibited use of the exclamation point.  We understood why the author added so many exclamation points, she was new to the company and worked on the other side of the country. So there was no other way to convey tone. Specifically, there was no other way to convey that she’s excited, and happy, and not trying to be bossy or overbearing. It was the punctuation equivalent to the smiley face.

Fast forward nearly a decade later and I find myself overusing the exclamation point. It started out with a simple “Thanks!” at the end of my emails. As a new manager, I wanted to send a tone of “hey, thanks for doing the work I described in this email, I appreciate you.”, and the exclamation pointed thanks seemed to do a good job of it. When I changed jobs a few years later use of exclamation points increased as relied more on my indirect authority. It wasn’t a conscious decision, and looking back I think I wanted to convey a tone of “I know I can’t tell you want to do, but I’m fun and friendly and wouldn’t it be great if we could collaborate on this thing?”. However, in my current job, the use of exclamation points is just getting out of hand. From senior managers down to staff, it appears that the period has been replaced with an exclamation point. And truth be told, I got swept up in the culture of it all, and find myself writing emails where there are more exclamation points than period, or (heck) even sentences.

And then a few weeks ago, I realized…I became my coworker from a decade ago, the one that overused the exclamation point. Working in an organization with mainly women, I noticed that there were a lot of exclamation points, smiley faces and capitalized THANK YOUs and YOU’RE AWESOME! It just became too much. My team knows I’m excited about the work they do-I thank them in person, with trust (i.e., not micromanaging them) and with incentive awards (who doesn’t like a little cash or time off?).

Shivani Sharma is a career Federal employee who has an interest in the role in networking plays in career development and advancement. Throughout her career, she has served as a both a formal and informal mentor at work and has volunteered in career mentorship programs. In 2010 she spearheaded a summer career mentorship program for college students, which is still active today. Finally, this interest has led to founding a new startup (Lateral-Me, launching Summer 2016) that will increase lateral career opportunities in the Federal government.

Thank you for your article. I especially like that you write an email and then go back and reread what you have written. Not enough people do that. The comment about replacing one bad habit for another (i.e .hashtags) was amusing since I find it to be a common irritant. Might I suggest that more people review their emails for proper tense (paragraph 5) and the use of semicolons instead of a comma (paragraph 2).
Thank you for bringing this issue to the forefront. I look forward to your future blogs.