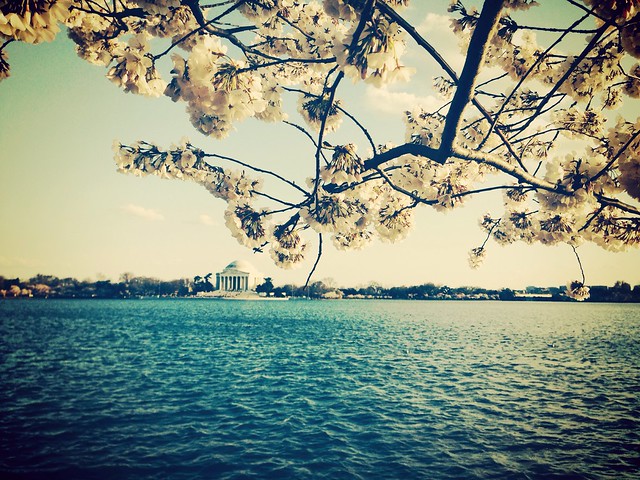 This was the winter without end, days and weeks worth of single-digit temperatures that made me want to curl up with a bottle of bourbon and stay inside forever. I’ve never had to wear so many layers. It was a real winter, the kind I thought that DC never got with its mild Mid-Atlantic climate.

And it literally just ended – we had snow a couple weekends ago, as if we lived in Westeros and spring and summer snows were a common occurrence. I am not convinced winter is over.

The cherry blossoms arrived late but, finally, we’ve been treated to a stretch of glorious mild days. I rode my bike down to the Tidal Basin to get the above picture. It’s an iPhone shot and edited in the Flickr app, using the Denim filter.

Someone must like it – the photo has received 75,000 views in two days. 75,000 views from “unknown source” according to Flickr’s stats. I think the pic might have been in Explore.

My advice for visiting the cherry blossoms is simple: go early. Do not attempt to drive. Hop on a bike or the Metro and get there before 8 AM. The light is better and you won’t have to deal with the crowds. Enjoy spring before the snows return!

In Canada’s capitol, spring hasn’t really arrived until the crocusses on the small hill immediately below the statue of former Prime MInister Wilfrid Laurier on Parliament Hill start popping out. Haven’t seen them yet this year. I’m also told there might be snow flurries on Tuesday.

Has “Spring” stopped off at a Five Guys in your town, eaten too much and is now sleeping it off? If so, wake Spring up and tell it that it is late for its meeting here.