Lower your standards for what counts as progress, and you will be less paralyzed by perfection. – Adam Grant

Ok, so the family dog will never read Chaucer. But she may learn to not chew the book, sit still while my daughter reads to her, or maybe even learn to bark a word or two. 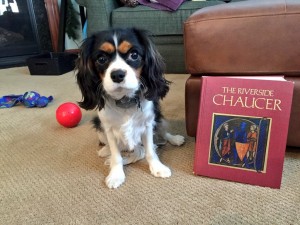 Years ago, I had the opportunity to relocate to Europe with a former employer.  I had always wanted to work overseas. In a chance meeting at a beer hall during a vacation in Munich, I met a senior level executive from another division of the company. He invited me to meet up with him when I arrived back in the United States to discuss opportunities to work in Germany or Austria. Whhhaaatttttt?

I thought about it and decided that I could learn the language, didn’t currently have a family, and it would be great for my long-term career. I also had a big yellow dog. After some research, I decided that I couldn’t relocate because of the dog. I had a smart friend ask me, “would you do it if you didn’t have the dog?” I was shocked! I wouldn’t give up my pup! He said that wasn’t the point. After some reflection, I realized that my hesitation at relocation wasn’t about just the dog. I wanted it to be perfect. Right job, right country, right city, with the dog, etc. I was waiting for perfection!  I didn’t relocate.

Do something in the direction of your dreams. You may never get there, but you may also be surprised at how fast a year goes by, and you did something. Or not. The best time to plant a tree is 20 years ago. The next best time? Right now.

My family and I will be vacationing in Germany and Austria later this year.  We’ve been cooking German food, learning the language, and planning for a great trip.  While we may not move there for work, there could be a retirement option!

Progress over perfection. Don’t get so caught up in what the dreamy future may be that you don’t take the first steps towards that future!