A few weeks ago, I wrote an entry for speakers about analyzing their tweets to improve future presentations. Since then, I’ve had a few people ask “how do you get people to tweet about you in the first place?” That’s an excellent question.

Whenever I attend a session, I’m always looking for something tweetworthy because it’s a great opportunity to share valuable or interesting information with my followers. A few years ago, watching your audience hunker over their device probably meant you’ve lost them and they’d rather check email or play solitaire (bad). These days, it might mean they’re especially engaged and are hurriedly trying to tweet you (good). 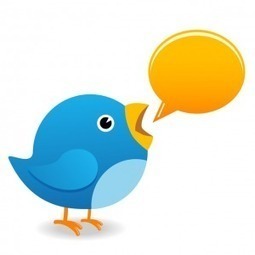 Some speakers may care less about being tweeted, which is perfectly fine. This post is for those that would like to be more twitter-friendly for the audience. Here are a few tips:

If you’re the type of speaker that likes to wax poetic with ornate balladry, your audience will swoon at your brilliance, but you won’t get many tweets. I had college professors who lectured as if reciting Shakespearean metrical compositions, but I can’t remember a single lesson and half my notes ended with …

Get straight to the point with plain language and leave the superfluous adjectives at home.

The best tweets from presentations are prepared, short sound bites. No need for the audience to paraphrase and possibly misinterpret; if it’s short enough, it will be tweeted verbatim. Less is definitely more when it comes to tweetable sound bites.

4. Put Important Takeaways on a Slide

Make it even easier by showing the important sound bite in plain language on a slide as you repeat it twice. Some people are much more visual than auditory. If they see it prominently displayed (large font, stand-alone, and plenty of negative space), their natural tendency is to write/type it down.

It’s good to let your audience catch-up if they’ve been frantically clacking away. The best kind of “break” is not silent reflection; it’s okay to pause, but go longer than two seconds and it gets uncomfortable. The best break is to talk about something less important, such as an example, anecdote or funny story. Whenever I hear a speaker follow an important point with “let me tell you a quick story” or “recently, I read this article,” I breathe a sigh of relief because I know I can keep typing in the tweet without missing the next important point.

6. Use Lists, Numbers, or Quotes

These three tactics work especially well on slides. Whenever people see an organized list, numbers/statistics, or an insightful/humorous/thought-provoking quote, they tend to jot it down.

If you’re presenting a list of items, start with the whole list first and give people time to write them down. So many times speakers will just dive right in and minutes later, I’ll hear “the third reason why such and such” and I’ll wonder whatever happened to the first two. After running through the items on your list, it’s a good idea to show the list on a single slide again.

As for numbers, a speaker is 74% more likely to get positive reviews if he/she uses statistics. Actually, I just made that number up. But it caught your attention. It’s always good to pull in statistics to exemplify your point. If I say “it’s astounding how many IT projects fail,” I might get a reaction. But if I say “68% of IT projects fail according to a survey from IAG Consulting,” my point is strengthened so much more. However, be judicious with your stats and always reference the source.

Quotes are another great way of illustrating a point. Especially when it’s on a slide, people are likely to write it down or tweet it if it’s not too long. Make sure it’s from someone with authority on the subject. Quoting others also strengthens your point because it shows your idea is aligned with an expert in the industry.

Keep these tips in mind when preparing for your next presentation. Getting tweeted by the audience is great for increasing your reputation and brand. It establishes you as an authority on the subject and increases your following. Help yourself by helping your audience promote your presentation.

The Future of Digital Media