As a career-long federal contractor, I’ve had a front-row seat to budget crises dating back to the 1995-1996 shutdown that lasted 21 days.

These past few years have been a low-grade stress as budget deadlines loom and frantic late hour continual resolutions keeps the government open.  For both contractors and federal staff alike, it’s like an irritation under the skin that could go away … or could erupt into a flesh-eating wound that maims or kills you.

All of our clients have important public service missions. As contractors, we work hard to help them achieve them.  But these missions are forgotten in the itchy distraction of the looming budget deadline.

The agenda of our routine status calls divert from our contracts’ Work Plan to talk of the shutdown.  It’s not that easy to shut down and re-start major programs and initiatives.  Our federal counterparts are focused on determining what/who is essential and what/who is not. This includes their job, our contracts and our staff working on those contracts.

And that discussion does not even factor in the impact to various stakeholders and the public that is served by the mission/contract.  There is nothing that can be done for them when the government shuts down.

For example, we are a small business that helps government agencies apply technology and data analytics to improve communication and measure performance.  One of our contracts is to run EPA’s Safe Drinking Water Hotline and update the online knowledge base working with EPA’s Subject Matter Experts.  During the 2013 shutdown, the hotline was deemed non-essential.

Do we lay off the staff? If we do and they get another job, how will we get new staff trained in time to re-start the hotline?  If we don’t and absorb the overhead staff costs, will we go bankrupt? What about the monthly payments to the PBX system, equipment and software used?  We have contracts with these vendors that we can’t just shut down.

OPP re-assigned most of the hotline staff to contracts deemed “essential” or that were funded outside of the government. After a week on overhead with no end in sight, we laid off one person.  We hired her back after the shutdown.

EPA repaid our out-of-pocket costs but it was only a fraction of the full revenue the firm would have received if the hotline and knowledge base had remained open as required by Congress in the Safe Drinking Water Act.  OPP’s unemployment insurance increased.  And the employee we had laid off — rattled by the experience — soon found another job outside of government contracting and left the firm.

The Department of Commerce’s Bureau of  Economic Analysis estimated that the 2013 government shutdown reduced real GDP growth by roughly 0.3% in the fourth quarter.  The Whitehouse’s Council of Economic Advisors noted that the shutdown side-tracked the creation of 120,000 new jobs.

These numbers likely do not factor in the lost productivity of the government worker and his/her contractors trying to figure out what to do about the shutdown instead of fulfilling the mission.  It certainly doesn’t account for the stress.  Nor the resentment of “essential” federal staff that had to work while the “non-essential” staff down the hall got a 16-day paid vacation.

According to Wikipedia, the government has shut down 18 times since 1976.  That’s 18 times too many. It’s like trying to run a race with an intermittent hesitation or outright collapse at the side of the track every other lap.  Politico describes the impact of “continuing resolution hell:”

“…constructing new Coast Guard ships and launching weather satellites faced new delays. Hiring departments closed. Budget officials began to tally losses as their typically powerful purchasing power dwindled. For pretty much the rest of this year, and perhaps 2016, too, the U.S. government will effectively be in a state of suspended animation.” 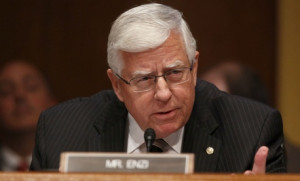 Wikipedia cites the more than a dozen continuing resolutions since 2008.

There is no doubt that the government has some inefficiencies that can be found and tightened.  Or maybe old programs that could be retired.  But let’s do it in an organized and rational way.  Senator Enzi’s proposal is a sensible starting point.

Let’s hope he can rally the rest of Congress to agree to a budget process that will keep our country healthy inside and out.  No more irritation and stress.  One body moving forward at Olympic gold medal speed.

Janice John Roper-Graham is part of the GovLoop Featured Blogger program, where we feature blog posts by government voices from all across the country (and world!). To see more Featured Blogger posts, click here.