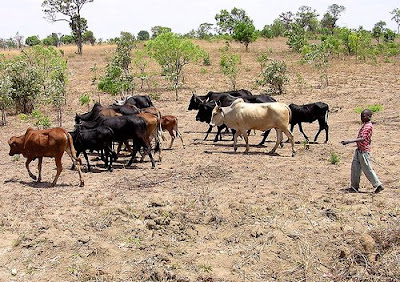 Digital pens could prevent the next Avian Flu or West Nile Fever.

How’s that? Yep, digital pens. You might have heard some of the growing buzz among tech writers about a new one, the Pulse from a company called Livescribe. Essentially they are devices that look like standard pens but use digital cameras, wireless positioning technology or special paper, even digital recorders to let users capture, store and transmit to their PCs whatever they have written. You can learn about the technology in detail from “Uniting the Paper and Digital Worlds,” a new article in “Computing Now” from the IEEE Computing Society.

For those of us who take notes for a living, having a pen that can upload our scribbling to a computer in searchable form is a godsend. But for African farmers and herders, it’s a matter of life and death.

Especially in Southern Africa, keeping livestock alive and healthy is both a struggle and an economic and human imperative. Some 60 percent of the population there depends on livestock production to survive. Not only is demand for livestock products growing within Africa, but African countries increasingly depend on livestock exports to fund development.

But until recently, the region has lacked the means to keep livestock free from diseases that could devastate herds and flocks and, by spreading to humans, could result in pandemics. Veterinarians are few–Malawi, for example, has none in its rural areas. Transmitting data about animal health to the government was tough without Internet access or even well developed phone systems. In many cases it took months. And in that time, infections could take a terrifying toll.

In Johannesburg, South Africa, United Nations Food and Agriculture Organization Regional Emergency
Livestock Officer Fred Musisi and Phil Fong, the UN Regional Data Information Coordinator, struggled to overcome the communications problem. Fong learned of a digital pen that could transmit data via cell phone or the Internet when he faced a similar data reporting problem while working on the South African census. The pen did the trick then, so the two men applied it to the livestock crisis.

Here’s how Financial Times described their experiment in a Sept. 21 story on FT.com:

The solution, provided by Xcallibre, a subsidiary of the South African company Data World, used digital pen and paper technology from Anoto that could collect the data as the workers wrote it down, and then transmit it over the mobile network to a central server. An 18-month pilot, which received funding from the South African government, was run with 35 field workers in five countries: Namibia, Zambia, Malawi, Mozambique and Tanzania.

A UN Food and Agriculture Organization report quotes Musisi on the pilot program’s success: “If there is a case of rabies or an outbreak of a deadly disease, a field worker can send the detailed surveillance data immediately only using a mobile. Worst case, if there is no mobile phone network nearby, the field worker has to move to a location with network or must find the nearest Internet connection. But no longer do they have to drive hours back to a capital city before the information can be confirmed.”
According to the report, HIV/AIDS program workers now are mulling how to apply digital pen surveillance. Having tested the approach in countries with the toughest terrain, poorest communications infrastructure and worst conditions in Africa, Fong and Musisi expect it will be easily adopted elsewhere in the region.

And as I did in my last post about African computing ingenuity, I found myself thinking once again about how much easier it would have been to use digital pens for the 2010 Census than the handheld computers that have caused such disarray.

Unbelievable. I was talking to a South African today how it is amazing that only ten years ago cell phones were a luxury in the U.S. and now it seems like every rural farmer in Africa has a mobile. Inspiring. Now if only the Census can join the 21st cnetury.

Exactly! I’m really intrigued by the ingenuity born of having so little is catapulting Africa ahead in the use of cell phones and the Web. We have a good deal to learn from them about serving rural and underserved populations . . . and everyone else, too! Thanks for your thoughts!