I live in the city of New Haven, CT (#gscia). I am reading a super famous book about cities called City by Douglas Rae. It’s one of the best books I have ever read.

It has 12 chapters. This is a 12 post series about each chapter. Today I’ll be discussing building inclusive public spaces in a city.

This is what a typical page of City looks like after I’m through with it: 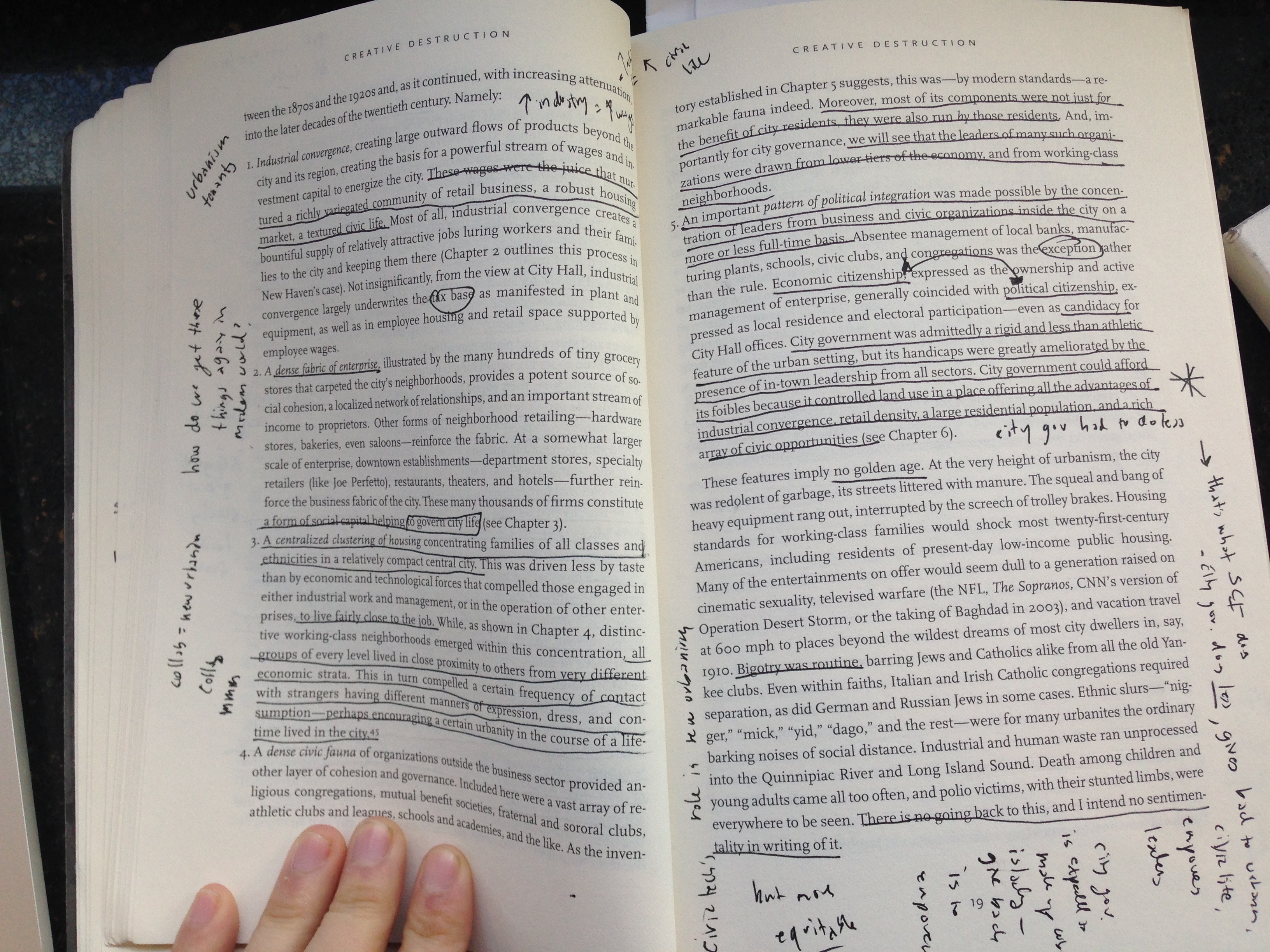 I realize that if you underline an entire book it defeats the purpose of underlining.

Side question: how do you take notes when you read?

But even fenced in by my relentless underlining, this part stood out to me in Chapter One:

“Central to the democratic experience is contact with difference—other races, other nationalities, other economic classes, other language groups. And, too often, the end of urbanism has undermined that experience by promoting social homogeneity within municipalities.”

This hit hard because I have grown the most in public spaces where people are different than me. And that growth was possible because it was an inclusive public space— a place where people feel safe to share their divergent perspectives, ideas, and needs.

So, how do we build inclusive public spaces in our cities?

Not so fast. First, I want to consider:

Answering these questions might get us closer to understanding how we build them.

Why is it important

Here are a couple reasons why building inclusive public spaces in cities is important:

“If I am able to evade differences, and conflicts by seeking private escape, is it not possible that I will lose some of the skills once so useful in negotiating those differences and resolving those conflicts?”
-Douglas Rae, “City”

Rae has a beautiful way of taking global phenomena and bringing it back to micro interactions between individual people.

The best decisions are those made by the individuals that the decisions will affect. Inclusive public spaces can bring people together to make better decisions with each other. They can train us to learn the vital practices in better decision-making: listening (giving people voice) and hearing (making people heard).

-Jane Jacobs,  “The Death and Life of American Cities”

Police don’t have the capacity to be the primary agents making our cities safe. Our cities are safer when citizens design and maintain their own social pacts with each other, across difference: Jacobs’ “network of voluntary controls and standards.” We are able to co-negotiate these spoken and unspoken standards in inclusive public spaces.

Where do these spaces exist already

Here are four examples of inclusive public spaces in the City of New Haven, CT:

The YCMA is one of the most racially and socio-economically diverse places in all New Haven.

Location is an important factor. Its right across from the central bus stop for all major bus lines in New Haven — as well as the New Haven Green, the center green for the entire city.  And pricing too. It is tiered based on your income-level.

Lastly, although the YCMA may not be considered a place that facilitates relationship-building as much anymore, the practices and customs of a gym may play a role. The small touches passing through machines, wiping down of weights, and daily hellos in locker rooms are all opportunities for moments of displaying respect and acknowledgement. 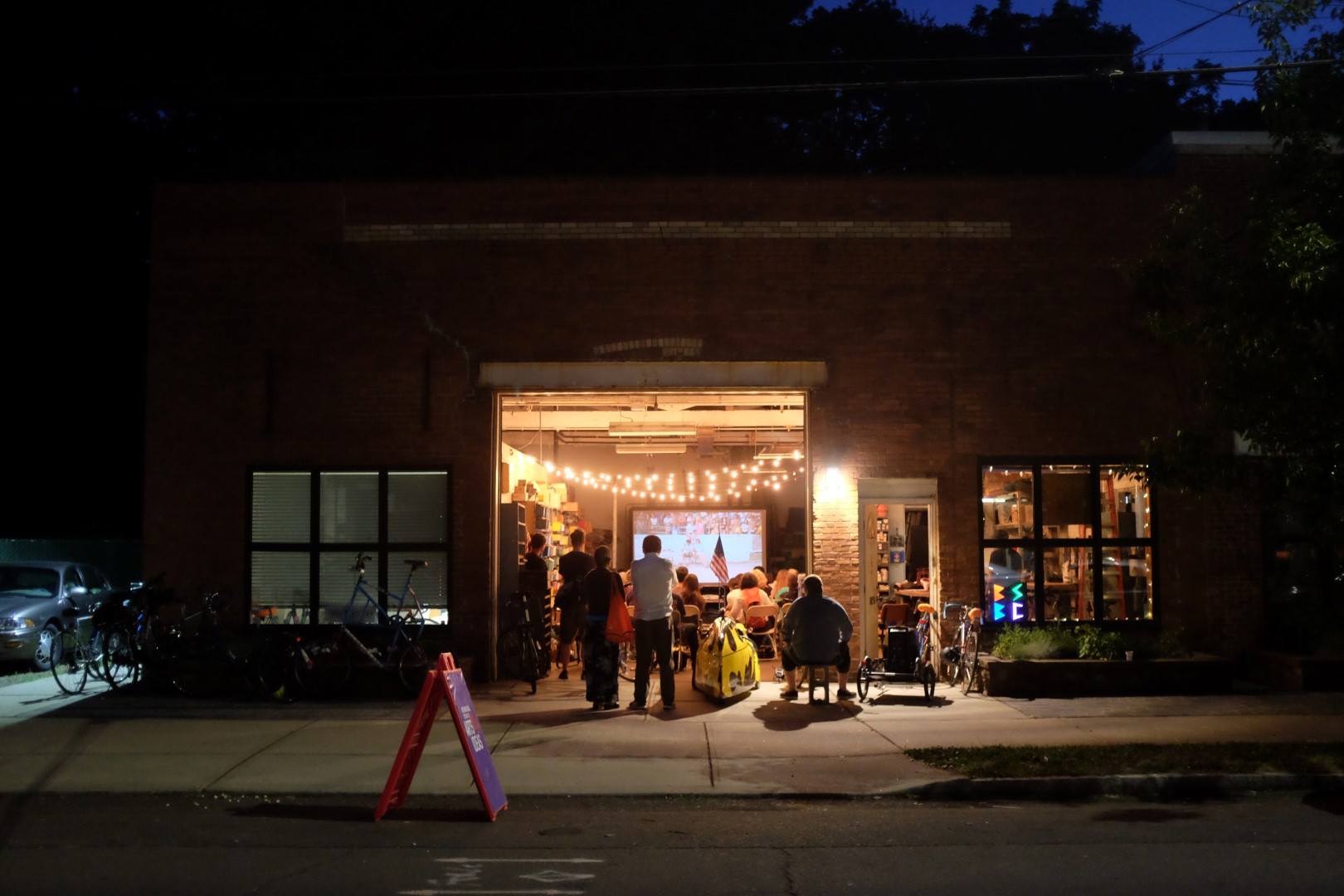 The Bradley Street Bicycle Co-Op (BSBC) is a community bike shop working towards an equitable New Haven by getting people on bikes. Biking and bike repair are activities often considered to be reserved for white, male-bodied people — but BSBC feels accessible to everyone.

This has a lot to do with how the space is designed.

BSBC looks like a living toolbox — walls filled with tools, spare parts, and (most of all) possibility. When you come in during evening shop hours, you can expect to see cheery signs on the walls, community event posters lining the windows facing outside, and all volunteers either swapping tips or singing along to the music playing (usually Drake). And, of course, you’ll find John Martin (he/him/his pronouns), the bouncy owner, who welcomes people at the garage door (that’s always open in the summer) with a smile, an offer of a tour, and a peanut-butter blossom cookie. 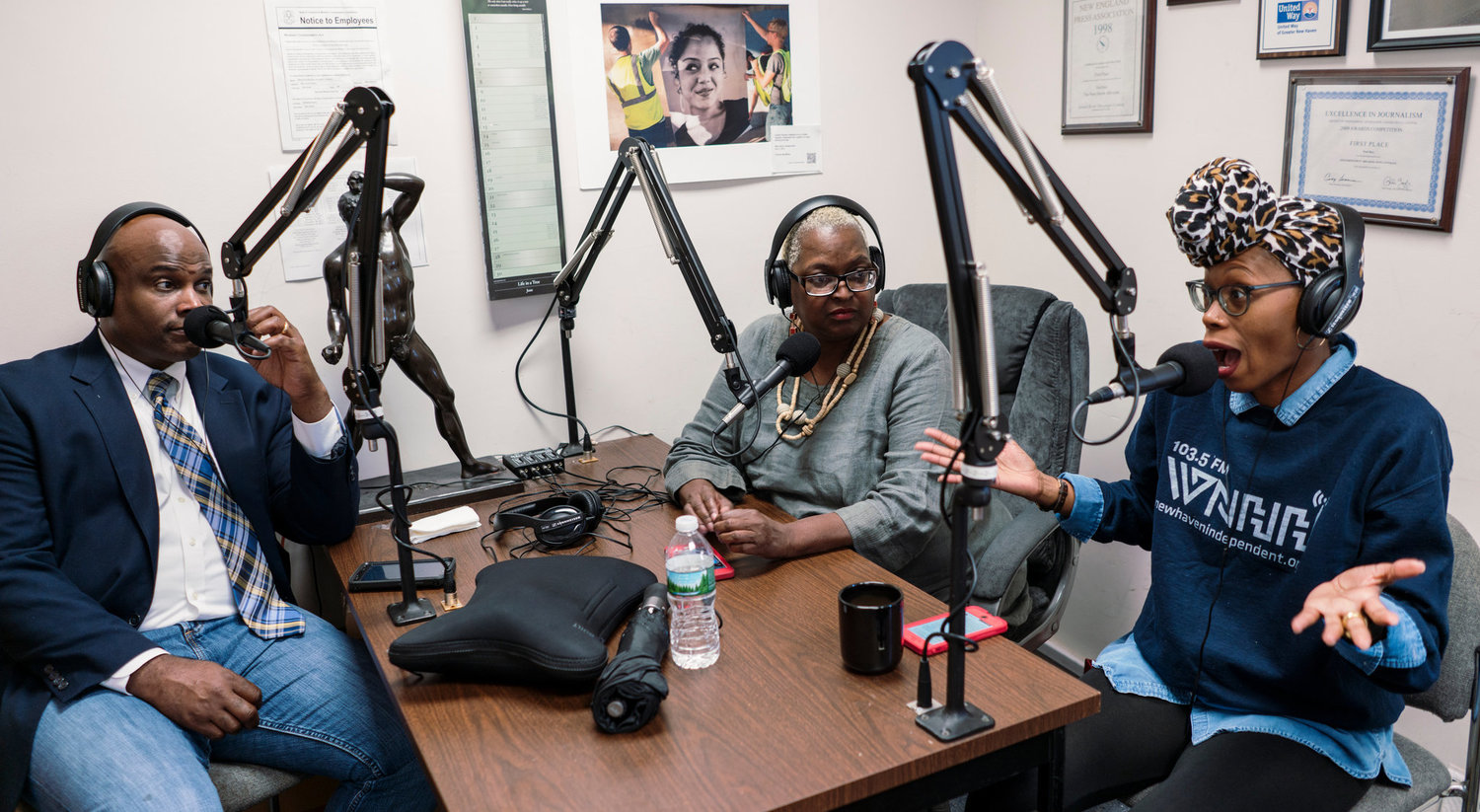 One look at WNNH Radio’s list of last recorded shows gives you a clear picture of the voices they prioritize putting on air — many hosted by female-bodied people and people of color. On WNNH Radio, voices often unheard in media spaces become the authorities on topics of politics, love, and culture.

Youth Continuum (YC) is a multi-service agency serving homeless and at-risk youth and young adults. Within the past year, YC has prioritized a population disproportionately affected by homelessness and neglect: queer and trans youth. They hired Elizabeth Larkin (they/them/theirs pronouns) to be an Outreach Case Manager whose caseload is already 33% queer and trans youth.

Since working there, Larkin has helped Youth Continuum open the door to the dozens of homeless queer and trans youth who need resources and love throughout the city and state. YC has the basics — peanut butter and jelly sandwiches, warm blankets, a pool table, and case management and clinical services. But it also has invested in something much more foundational — staff that deeply care, reflect and respect their clients, and can whoop the kids at spades.

By entering these spaces in New Haven, some patterns emerge:

I’m not sure if I’ve come to many concrete conclusions on how to build an inclusive public space, but I have a hypothesis:

People can lack a variety of things: income, safe transit-options, education. But one thing everyone can give — one thing we all have a limitless supply of — is perspective. Inclusive public spaces are those that not only accept but encourage individuals to share and listen to perspectives. In particular, the perspectives of strangers.

Caroline, thanks for a great post! Inclusivity in our cities and communities is so integral to building a system of support, and I agree with you that New Haven (my hometown!) is doing a great job.

The annual International Festival of Arts and Ideas is another great example of the city coming together for a common purpose and encouraging unity and inclusivity: http://www.artidea.org/

Arts & Ideas is amazing. For the content of their work and location — it’s amazing to see the New Haven Green truly used as a community space in the summer during their concerts.

Hi Caroline, great thoughts! I think creating these spaces can be at times challenging due to financial situations and geographic limits, however you did a great job giving examples that look past these challenges. My home town of LV, NJ could defiantly use more spaces to encourage discussion among the citizens. I also, agree that creating these spaces would make our cities safer as it would give people the opportunity to see a different perspective and take away a new understadning. Great post!