Maybe we are still reeling from the longest government shutdown in U.S. history… and — let’s be honest — we all have certain anxiety that there could be others. Perhaps that is why it is so easy to forget how pernicious the broken budget process is in good government.

And it is hard to fully imagine how truly broken the federal budget process is. As FiveThirtyEight reported, every year since 1998, Congress has failed to pass the required spending bills that keep the government operating by the October 1 start of the federal fiscal year.

Just pause for one moment and let that fact ruminate — every year since 1968.

We all live with certain terms and generally — probably not fully — understand the process, but just to remember how the process is supposed to work, because, even at its best, it is somewhat mysterious:

Most federal agencies and programs rely on annual funding appropriations made by Congress. And every year, Congress is supposed to pass 12 appropriations bills that makeup spending for federal agencies. Those spending bills are aligned with each of the appropriations subcommittees in both the House and the Senate. That is supposed to happen by the start of the federal fiscal year on October 1 each year. (Both the Congressional Research Service [h/t  the Federal of American Scientists] and the Center for Budget and Policy Priorities have more detail on the budget process, if you are interested.) 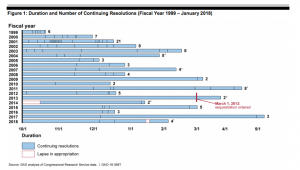 That is how it is supposed to happen, but… it hardly ever happens. As Heather Krause, the Government Accountability Office’s director of strategic issues testified in February 2018:

In all but 4 of the last 40 fiscal years—including this year—Congress has enacted continuing resolutions (CRs) allowing agencies to continue operating until an agreement is reached on their final appropriation bills.

Of course, the government is not able to operate when Congress fails to pass the 12 appropriations bills that fund government.

But imagine an organization that repeatedly — or even worse, as the norm — failed to allocate money for programs.

Budget uncertainty and disruptions create management challenges for agencies. For example, under a CR, agencies can continue to operate, but the funding expires on a certain date and therefore creates uncertainty about both when final appropriations will be enacted and the level of funding that will ultimately be available. In addition, when there is a possibility of a funding gap, agencies must prepare for an orderly shutdown of government operations, even if a shutdown is ultimately averted. In response to these uncertainties, our prior work has found that agency officials have taken a variety of actions and leveraged available authorities to execute their budgets and carry out their missions.

This process is particularly pernicious because it goes largely unnoticed. Shutdowns garner attention and countdown clocks. CRs get a passing mention.

I tried to see if there is a better way — somehow other countries don’t seem to have the problem, but other countries have different ways of putting together their budgets. Few others have a Madisonian democracy where there are checks and balances across different branches of government. But if somebody knows of better systems, I hope you will share it.

There have been proposals to shut down shutdowns.

Senators James Lankford (R-OK) and Maggie Hassan (D-NH) recently introduced the Prevent Government Shutdowns Act. The proposal says that if all appropriations bills are not passed by both houses and signed by the President by October 1, no official travel will be allowed for Office of Management and Budget (OMB) leadership or staff, Cabinet members, or Senators and Representatives along with their committee and personal staffs (except for official travel within the DC metro area).

Others have proposed that Congress just shut down the government-shutdown option, forever.

It could do this by implementing something called an automatic-continuing-resolution provision, which legislators from both sides of the aisle have advanced numerous times over the past 30 years.

Right now, when Congress cannot agree on how to spend money, it passes a continuing resolution, or CR, which continues federal agencies’ financing for a given period of time. Automatic CRs would absolve Congress from the responsibility of passing new CRs, preventing both quick financing lapses and big, painful shutdowns. But this seems to only add to the CR madness rather than really addressing the core issue.

And, frankly, perhaps the biggest problem is us. We as a country simply can’t find a way to move forward together, and that is represented in our larger politics.

But this broken process is undermining the government’s ability to carry out its mission, it is very expensive, and, perhaps worse than any of that, it erodes respect for the federal government’s reliability.

Thanks for this intriguing piece of history Chris! It sometimes seems like the “new normal” of how the budget process works isn’t ever going anyway.

Really good piece. I think it’s clear that we need a new system. While I hope that we could bridge the partisan divide, it certainly seems that the gap is widening. I think given the current state of politics, the shutdown has to be off the table. There need to be consequences for not meeting deadlines, as there are seemingly everywhere else.