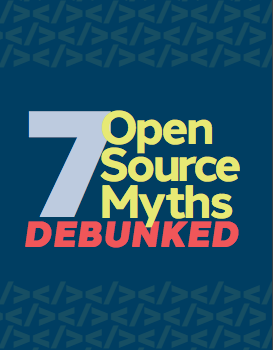 The federal government is known for being a lot of things. It’s the largest employer in the country, and the largest buyer of goods and services in the world.

Add to that list the largest creator of custom software code. It’s one of those facts you probably don’t spend much time thinking about unless you’re a technologist or are into coding or conducting market research — but you should. It’s big business in government, and it impacts everything we do.

At its core, “open source software is software developed by and for the user community,” according to the Open Source Initiative, a California-based nonprofit that serves as the steward of the open source definition.

Per the Federal Source Code Policy issued in August 2016, federal agencies are required to release at least 20 percent of new custom-developed code as open source software for three years. Agencies are still working toward this goal but also viewing open source as a part of a larger plan to modernize IT systems and migrate to the cloud.

A growing number of federal, state and local governments, including the city of Pittsburgh, Oklahoma and even the National Security Agency, are turning to open source software and reaping the benefits of cost savings, collaboration and greater freedom to adapt code as their needs change.

In this GovLoop guide, we address common myths that can hinder open source adoption, such as sentiments that open source is insecure and unfit for enterprise use. You’ll gain insights from government technologists and other experts to help your agency make fact-based decisions about using open source.