Originally posted at The GenerationShift Blog:

There is no doubt that social media and the Millennials were two intertwined forces that propelled Obama to the Presidency.

Offering evidence to the idea that Obama will be the first President to use web-based, social media as a primary communications tool, this morning I saw a link on Yahoo! to what is about to become a weekly radio address from President-Elect Obama. Of course, there are already links on YouTube and Change.gov as well. It’s being dubbed a “‘web-side” or “Tube-side chat”, remixing the fireside chat used by FDR to reach Americans right in their living rooms during the dire days of the Depression. Only now Obama is meeting people everywhere and anywhere they happen to have a link to the Web.

As often happens to a Web wanderer, one link led to another and before long I found myself watching Obama’s election night acceptance speech for the fifth time. At about 1:15, the camera pans viewers to give a glimpse of crowd reaction. I was struck by this image: 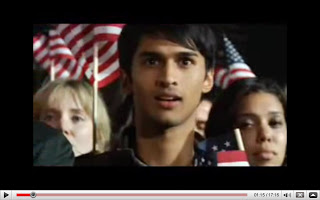 For me, this young man’s expression captures the essence of how many Millennials looked at Obama from the start, spurring them to mobilize on his behalf in unprecedented numbers.

The key, of course, is for Obama to harness and channel this energy in the months ahead, asking not only Millennials but all of us to sacrifice time and energy for one another as Americans, and especially for those citizens who are most vulnerable and hardest hit by the economic downturn.

I’m not the only one speaking about this connection between Obama and FDR. First, spend some time with this article by Jonathan Alter entitled, “Reaching Out with Radio. I’ll quote at length since it’s so applicable:

A few days after Franklin Delano Roosevelt was sworn into office, he sat in the White House working on a radio speech about the country’s banking crisis…It was the depths of the Depression, with a quarter of Americans out of work, homeless and destitute. The American economic system was in a state of shock…The New York Stock Exchange had suspended trading, and the Chicago Board of Trade bolted its doors for the first time since its founding in 1848. This was the bottom. I

Roosevelt’s inaugural address at the Capitol had begun to restore hope…Then FDR used a new medium in a new way to change millions…FDR brought natural talent to the role. His speaking voice was a beautiful, relaxed tenor, not the contrived basso profundo of pompous politicians.

Roosevelt owed much to technological good fortune. In 1921, the number of radios in the United States was in the thousands. By 1928, there were 9 million, and by 1932, 18 million, with about half the households owning at least one radio.

Gerald Ford, about 20 at the time, remembered FDR’s Fireside Chats as “big events — we would all stop and listen.” Ronald Reagan’s biographer, Lou Cannon, has written that Reagan’s “metaphors [were] the offspring of FDR’s.” And Bill Clinton recalled hearing his grandfather talk about how he sat in rapt attention, “then went to work the next day feeling a little different about the country.”

Let’s return to 2008. Here’s another link to some brief comments on Salon.com from Paul Levinson, a professor of popular culture and media studies at Fordham University…and an excerpt:

I think what we have been seeing on TV is very similar to what took place on radio during the Depression, in that both are about reassurance…Just as hearing Roosevelt’s words reassured Americans that things were going to get better…What we have been seeing the past weeks reassures us that America has not been hopelessly diminished.

While I never thought that America was “hopelessly diminished” and it is far too early to compare an Obama presidency to FDR, it is clear that Obama will continue to use social media in a way that capitalizes on its best elements: giving each of us and all of us the ability to connect and collaborate beyond time and geography to discover solutions for the challenges that can only be addressed through a profound change in approach and action.

I love the fact that these fireside chats are moving online. For over a year, gov’t agencies have been trying to negotiate a better terms of use with YouTube and many are unsure if they can really have their videos there online.

I think those are the minor details that can prevent progress. It’s somewhat important enough to prevent us from doing anything but the risk/reward shows we need to be on YouTube (and Vimeo, etc).

I’m glad Obama is just doing it. The risk of not doing it is more than the risk of a terms of use agreement that I’m sure we can work out.

So then why has he jumped ship on his Twitter stream? (http://twitter.com/BarackObama) He can at least Twitterfeed changedotgov YouTube postings or something. Hmph. I hope he keeps this YouTube stuff up, or else that boy in the video will be very, very disappointed.

Survey – What would Make Your Job Better?