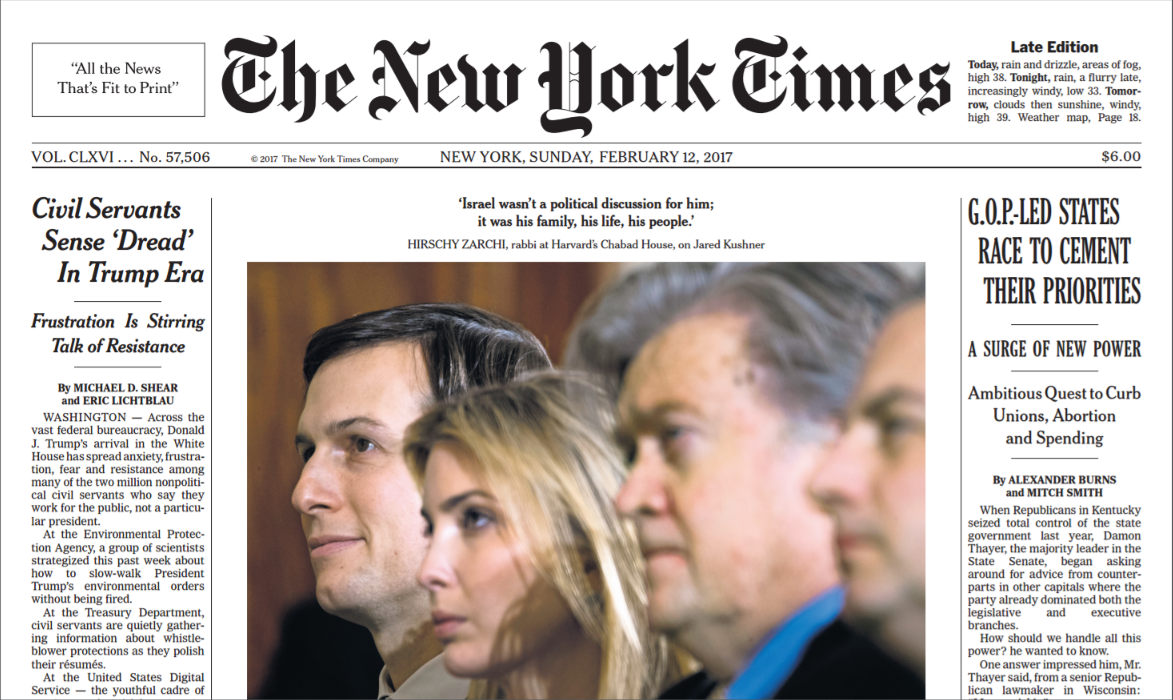 Changes in federal government keep coming fast. That’s why GovLoop is giving you these weekly recaps of presidential transition news that may affect agency management and employment. If you’ve fallen behind, check out all the previous recaps.

By the time you read this, there will undoubtedly be new developments. And, this roundup can’t include everything. The focus is on presidential transition news most relevant to federal employees. Check out the linked sources for more information.

One of the biggest transition-related stories of the week is the continued saga of the administration’s ban on visitors, immigrants, and refugees from seven majority-Muslim countries. On February 9, the 9th U.S. Circuit Court of Appeals issued a unanimous order denying the administration’s request to reinstate its travel ban. Following the ruling, White House officials and Trump made conflicting statements about whether the administration will ask the Supreme Court to review the ruling, continue the appeal in the lower court, revise the existing order, or issue an entirely new order.

That wasn’t the only notable action in the courts. On February 8, a federal judge upheld a Department of Labor (DOL) fiduciary rule that would protect people by requiring brokers and other financial advisors to act in their client’s best interests when giving retirement advice. Reuters characterized the ruling as “a possible setback for Trump’s efforts to scale back government regulation.” The next day, despite the federal regulatory freeze, the DOL filed regulation with the Office of Management and Budget (OMB) that would delay implementation of the rule for 180 days—a move Trump requested via executive action toward possibly rescinding the rule.

Meanwhile, during Jeff Session’s second day as Attorney General, the Justice Department withdrew its request for a federal court to scale back a national injunction preventing the federal government from giving guidance to schools and students on the civil rights of transgender people.

2. Agencies at risk while some federal workers speak out

The February 12 print edition of The New York Times featured a front page article about the growing “anxiety, frustration, fear, and resistance” within the career workforce of the federal government.

The Environmental Protection Agency (EPA) is increasingly a battleground of change during the transition. Congress asked the EPA—along with the departments of Energy, Commerce, and Health and Human Services— to share studies that identify possible ways to cut agency spending. And, a member of the House introduced a bill that would eliminate almost all of the EPA’s budget, among other changes. Though extreme, the new bill is more restrained than another bill that proposes to “completely abolish” the EPA.

Even as the White House continued to make unsubstantiated claims of extensive voter fraud, a House committee moved a bill forward that would eliminate the Election Assistance Commission (EAC), the federal agency charged with ensuring “accessible, accurate and secure elections.” A group of voting rights, good government, and other organizations wrote to formally oppose HR 634, which continues to make its way through the House.

Since the inauguration, there has been a flurry of reports about information being removed from federal government websites.

More recently, the U.S. Department of Agriculture’s Animal and Plant Health Inspection Service (USDA APHIS) “abruptly” removed animal welfare inspection documents from its website. Amidst a public outcry, the Humane Society filed a complaint and a watchdog posted the deleted documents. The USDA APHIS has issued a statement about its decision.

The entire U.S. Department of Education’s Individuals with Disabilities Education Act (IDEA) website went AWOL on February 8. IDEA is a federal law that requires children with disabilities receive a “free appropriate public education” and is the topic that confused Education Secretary Betsy Devos during her confirmation hearing. The timing of the website’s disappearance was also awkward, happening just one day after Devos was confirmed and sworn in as Secretary. The Department of Education tweeted that the problem was caused by server issues and they “are working to resolve ASAP.” The IDEA website was still missing as of February 12.

After Nordstrom decided to stop selling his daughter Ivanka’s products because of a significant decline in sales, Trump criticized Nordstrom in tweets sent from both his personal and official POTUS accounts. Then, top White House counselor Kellyanne Conway promoted Ivanka’s products during a national television interview. Conway said, “Go buy Ivanka’s stuff, is what I would tell you. I hate shopping, but I am going to go get some myself today.” She then added, “It’s a wonderful line, I own some of it. I’m just gonna give a free commercial here. Go buy it today. You can buy it online.”

Experts believe Conway is in violation of federal ethics law that prohibits use of public office for private gain, including the endorsement of products. While the White House stated that Conway had been “counseled” about her statements, members of the House Oversight Committee have sent a letter to the Office of Government Ethics urging disciplinary action against Conway.

In a controversial and historic turn of events, the Senate confirmation of Betsy DeVos as Secretary of Education ended with a tie-breaking vote by the Vice President. Not only has the VP never needed to break a tie for a cabinet-level nominee, it was the earliest a tie-breaking vote has ever been cast by a VP. According to the Education Week, DeVos is one of the few Education Secretaries without any experience working in education. The Senate also approved Trump appointees Jeff Sessions as Attorney General and Tom Price as Secretary of Health and Human Services. The Washington Post maintains a list of the 690 positions that require Senate confirmation.

Trump continues to have some trouble finding people to nominate for other positions. Van Hipp, a lobbyist and former South Carolina Republican Party chairman, took himself out of the running for Army Secretary shortly after Trump’s first pick, Vincent Viola, withdrew as nominee for the same position last week. Lawyer Chuck Cooper removed himself from Trump’s list for solicitor general.

Controversy wasn’t limited to nominees. While National Security Adviser Mike Flynn faces renewed scrutiny over his discussions of U.S. sanctions with Russia’s ambassador to the U.S., one of Flynn’s top deputies was denied critical security clearance needed to serve on the National Security Council.

White House chief information security officer (CISO), Cory Louie, was suddenly “removed from his position” and escorted from his office. The CISO is responsible for keeping the president and their closest staff safe from cyber attacks. The White House has not commented on Louie’s departure—or his replacement.

What other presidential transition developments have caught your attention? What stories are you and your colleagues talking about at the office? Share your thoughts in the comments. (However, please keep politics out of the conversation.)