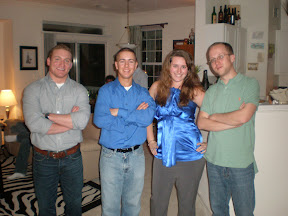 We enter this week’s installment of the “Spotlight on Leadership” campaign with a “why do you serve” post that is very close to my heart. I should actually say that this Monday I am taking the opportunity not to ask the question “why do you serve,” but rather to highlight three servant leaders, and the progress they have made over the last year.

You might know of my experience as the Detachment Leader (Officer in Charge) of the U.S. Coast Guard Auxiliary Detachment at The College of William and Mary. Interestingly, I wrote just several weeks ago of the value of serving as an instructor, at one time or another during your career, in whatever organization you find yourself working. Your experience teaching others will quite profoundly influence your own life, and what is more, you are likely afterwards to experience the great pride that comes from seeing your former charges succeed in ways far beyond what you imagined when they were students.

It is therefore fitting, as we tackle the notion of “Influencing Others” as this week’s leadership topic, that last week I received messages from several of my former students. I also heard from someone with whom another former student works, saying that, “she is performing very well, a cut above most.” It was a great moment, and I am happy to update you on their stories.

Emily Johnson graduated from The College of William and Mary in 2009, moved to Washington, DC, and has gone to work for USIS as a special investigator performing federal government background investigations. She has continued her part time service in the Coast Guard Auxiliary as the Planning Manager in the University Programs Branch (where she works with me). She is eager to begin training to earn her boat crew qualification this spring, which will pave the way for her to work in on-water boat operations. She’s also squeezing in some service time with her church’s refugee resettlement program.

Christian Fitzsimmons enlisted in the United States Marine Corps, graduating from recruit training this past December. I saw him (and others) shortly thereafter at a New Years party I hosted, and was so impressed with what I learned. He has gone on to school at the Defense Language Institute (DLI), where his acquired linguistic competencies will make him a instrumental in a changing world.

Mike Piantedosi transferred to the U.S. Coast Guard Academy, where he is currently completing his first year. I find myself looking forward to his regular e-mail updates. He will briefly return home to Virginia in several months, but his summer will be filled with time underway, either aboard an operational Coast Guard vessel or aboard the training barque Eagle. He has agreed to send me his own answer to the question “why do you serve,” which I will certainly post as soon as it is received.

These three, each coming from similar roots at The College, have each chosen dramatically different paths. One serves part time when the daily responsibilities of her civilian career are through. Two may go on to defend the United States overseas. One serves with his linguistic skills, through an understanding of other cultures, while another serves through her compassion for those from places far beyond our shores. Two have chosen to dedicate their efforts to saving lives and property at sea. All three continue to make me — and all those that know them — very proud. They show us that there are many paths to service, many ways to make a difference in the world. Their collective efforts help me to remember that there is no greater feeling than that which comes from witnessing the success of those you once mentored. Thank you for those efforts, and thank you for your service.