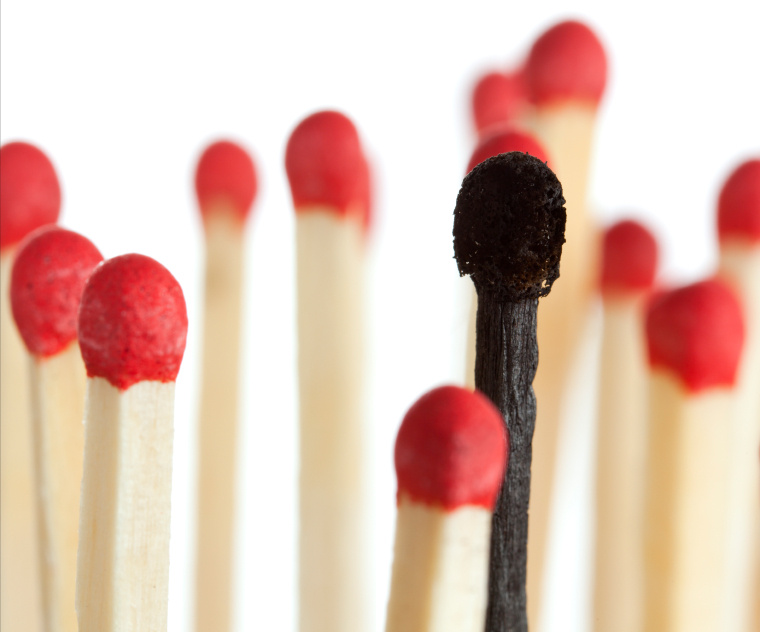 Conflict is a normal part of human nature, so it’s not surprising that we find it in the workplace. It’s probably even less surprising that it emerges when applying human-centered design (HCD). Just think about it – human-centered design is a very different way of working for most people. Many find its application uncomfortable in and of itself. Discomfort can breed conflict. It also encourages individuals from different backgrounds and areas of expertise to work together. Bringing together a disparate group of people can present the challenge of a variety of different working and thinking styles. Finally, the discipline inherently encourages tension through cycles of convergent thinking. The methods utilized during convergent periods force people to make decisions about which concepts move forward. They also attempt to harness the energy exuded as part of the process for productive purposes. However, tension at these points is almost inevitable on some level.

When the Innovation Lab at the Office of Personnel Management was built, the founders of the Lab acknowledged the inherent conflict that is part of human nature and human-centered design. They knew that in order to appropriately prepare people to apply human-centered design, they needed to equip people with the skills to manage the conflict that will arise. This approach is embodied in the OPM-driven Executive Core Qualification on Conflict Management which“[e]ncourages creative tension and differences of opinion; [a]nticipates and takes steps to prevent counter-productive confrontations; [and] [m]anages and resolves conflicts and disagreements in a constructive manner…”  Ultimately, the founders wanted the Lab to teach and model both the conflict management and human-centered design competencies that OPM was seeking to build across the federal workforce.

In order to make this vision a reality, the Lab launched a course in parallel to its HCD trainings entitled “Interest-based Communication, Conflict Management and Collaborative Problem Solving,” which was taught by Michael Rawlings, a self-described “recovering attorney,” who specializes in mediation and negotiation. In 2013, the Lab hired Michael as its Senior Advisor. For a bit more background on Michael, he writes and teaches in the fields of conflict management, diversity and American cultural history, blended with values-based executive leadership. He is also a mediator and holds certifications at all levels of the mediation practice through the Supreme Court of Virginia’s Office of Dispute Resolution. Additionally, he has applied these skills both within the United States and internationally.

I have been interested in learning more about how to manage the disagreements that arise as part of the design process, and I was excited to learn about Michael’s role on the team and his experiences when I joined the Lab for my detail. Recently, I was able to catch up with Michael to pick his brain. Our discussion revolved around the best ways to prepare teams to manage tension once it arises.

From our conversation, I’d like to share one exercise that you can do with your team, as well as create awareness around a number of resources that you can use to build your skills in conflict management.

As the group works through the final question, individuals are encouraged to make these statements in aspirational, positive terms. This is because this list becomes a set of norms for the group. The hope is that by the end of this activity, teams will aspire to live by these norms. This exercise is useful, Michael related, because “We know that conflict – ‘storming’- is inevitable. By ‘norming’ first, we can better channel the energy of the inevitable ‘storming’ to move us more quickly to high ‘performing’ teams because less time and energy will be spent clearing up messes from unstructured ‘storming.’” Unstructured storming can be avoided because this activity acts as an informal warning to one another about what hot buttons exist and what the group needs to do to avoid situations that will trigger them. It also leads to mutual understanding and respect.

Investing in a ‘common language,’ like Myers Briggs, EQi (emotional intelligence) or similar tools, Michael has found to be effective in giving teams a way to discuss their differences in a neutral manner. He explained that “knowing your type and temperament really helps.” Using Myers Briggs, Michael gave the example of one team member who might be more of an introvert, while another is much more of an extrovert. Myers Briggs not only becomes the language through which team members can discuss their differences in a neutral way in order to move forward in a productive manner, but it also provides a respectful understanding of why team members act the way they do and helps to enhance communication.

In the courses he teaches through OPM, as well as in his work with teams, Michael also uses the following two conflict management tools: Alexander Hiam’s “Dealing with Conflict” Instrument and the Conflict Dynamics Profile™.

The Alexander Hiam “Dealing with Conflict” Instrument is a situational awareness and behavioral tool, not a personality test. The assessment helps people see which of the five behavior styles in conflict (avoid, accommodate, compromise, compete or collaborate) they use most frequently. Michael explained, “I work with them in interactive group activities, so they can see the strengths related to each of the different behaviors… and honor and respect those strengths until they begin to see how they could be used to more effectively manage communication and conflict.”

The Conflict Dynamics Profile™ helps to plot out the path of conflict, so as Michael explained, “when a hot button or issue occurs, it gives you a map or a decision tree of how to de-escalate tension and choose to move a relationship or team toward growth, productivity and high performance.” The profile includes 15 scale items: seven constructive and eight destructive responses to conflict that are used to inform individuals and team choices. Michael shared that “The seven are the ones you want to use to move in the cognitive direction and to get the conflict to de-escalate, and the eight destructive behaviors are the ones that you want to avoid…because they move into dispute and cause a lot of problems, including team dysfunction.” Nine classic hot buttons are also described in the instrument, as well as guidance for cooling them.

If you’re interested in learning about other tools and approaches to conflict management and team building, Michael contributed to these two books published by Jossey-Bass and the Center for Creative Leadership: “Developing your Conflict Competence,” and “Building Conflict Competent Teams.”

Are there other strategies or tips that you have uncovered that are effective at diffusing tense situations or preparing teams to manage conflict? If so, please share them in the comments.

Another great post Blair! I’m glad that I got to meet you last week at the pilot HCD class. Michael is truly an asset for OPM and the Lab. I’ll be the first to admit that I am not a big fan of conflict (middle child syndrome), but I know it is necessary to effect change. Forming, Storming, and Norming are all required to reach Performing!

The No-Slime Method for Building your Professional Network: Part 1