In my previous blog, I discussed digitization in the public sector, why that is happening and the benefits of this massive transformation. I introduced the technologies which are enabling digitization; cloud, software-defined networks, analytics, and IoT, but did not dive into how those technologies are deployed. As part of any modernization effort, all four of these technologies must be researched and understood before any plan is initiated. So for the next several posts, I am going to go into more detail on these technologies behind digitization. Let’s start with the Wide Area Network (WAN).

The WAN is often taken for granted and yet it is one of the most critical elements of any CIO’s portfolio. It is considered a mature component, meaning it’s stable and not seen as a unique differentiation for IT.  The WAN delivers the connectivity between all resources and, from the end user perspective, as long as it works no one even thinks about it.

Over the last 20 years, the architecture for the WAN has been refined to provide more bandwidth and support the internet impact on the network, but for the most part it is the same design framework.  However, with the proliferation of metro Ethernet, adoption of the cloud and the IoT, it is now time to modernize the WAN! Cisco sees 55 percent of organizations across industries looking to modernize their WAN in the next year. So what kind of WAN should public sector organizations be aiming for?

The current WAN architecture (hub and spoke) was designed to bring all traffic from remote users and the branch offices back to the headquarters where the data center was typically located. This made sense as all the applications were based in the data center, and centralizing security technologies could provide a controlled environment.  Since 2010, many CIOs both in and outside of public sector have been moving many of their workloads and applications to the Public Cloud. Gartner foresees double-digit growth in government use of public cloud services, with spending forecast to grow on average 17.1% per year through 2021. With that migration, this legacy model makes less sense, especially as the applications are no longer in the agency data center. Now all the traffic is still going to the security systems in the data center, but it must also loop back out of the data center and go to the public cloud where the applications reside. This ‘hair-pinning’ effect adds latency for the users, increases costs for security components that need to scale to support the traffic flows, and increases complexity. 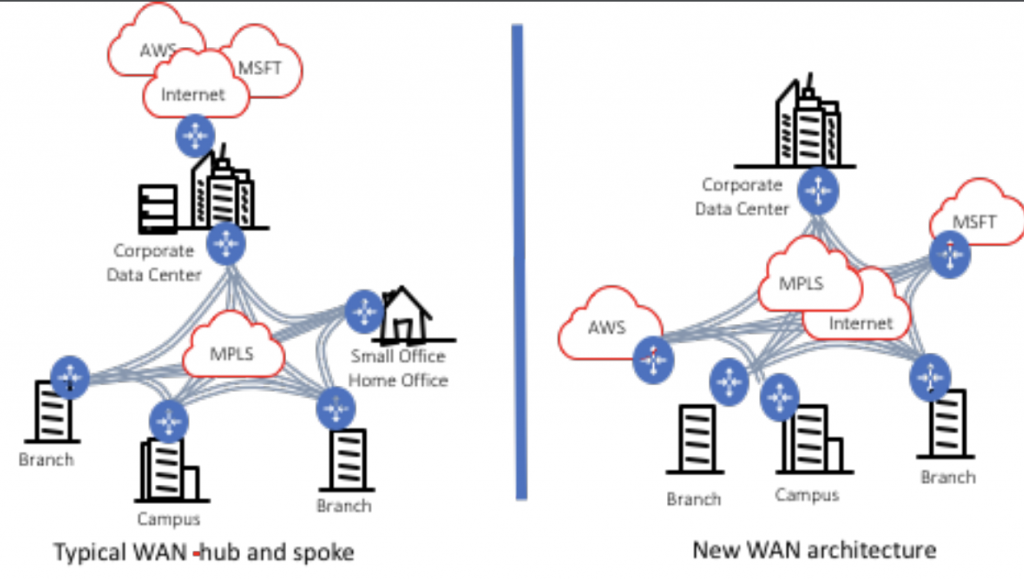 To address this new application delivery paradigm and the increased value of the internet as a transport, a new WAN model is gaining popularity. That model is called Software-Defined WAN, or SD-WAN. It is based on the premise that the internet is a viable transport, leveraging encryption technologies.  By using the Internet as a transport this allows users direct access to the application or resources in the public cloud, without going back to the data center.  Thus providing a lower cost WAN model with a better user experience. This model can coexist with the MPLS networks and bandwidth can be optimized based on the user traffic.  SD_WAN which is software defined, allows for simplified configuration management, zero touch provisioning, and on demand changes to the system.