A few weeks ago I shared Valve’s employee handbook, positioning as the defacto office culture that all other office cultures are competing with. Last week I wrote why I believe that organizational learning plans are crutch. What I failed to do was explicitly connect the two in some meaningful way.

Consider what follows my attempt to do just that

Organizations like Valve don’t bother with formalized learning plans, rather they choose to position learning as a cornerstone of their business. They recognize that creativity is their competitive advantage and organize around that very principle. Here is how the handbook positions learning:

If you were hired as a software engineer, you’re now surrounded by a multidisciplinary group of experts in all kinds of fields—creative, legal, financial, even psychological. Many of these people are probably sitting in the same room as you every day, so the opportunities for learning are huge. Take advantage of this fact whenever possible: the more you can learn about the mechanics, vocabulary, and analysis within other disciplines, the more valuable you become. (p39) 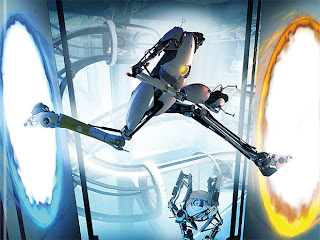 The approach at Valve is, I think, akin to what Rands recently described as “sandbox learning” in a great piece entitled “Two Universes: Design Well-Informed Improvisation“; a piece that explains the importance of gamification for learning using Valve’s popular video game Portal as its primary example. Gamification, according to Rands, isn’t “pulling the worst aspects out of games and shoving them into an application” but simply “clever strategies to motivate someone to learn so they can have fun being productive”.

I want to pull in some longer quotations from the entire article; but I want you to think about them in the context of organizations and not in the context of video games. Don’t worry, I will be chiming along the way to help you draw some comparisons.

As you progress through the increasingly complex puzzles, Portal does something [cool]. It teaches you the game, it teaches you how to improvise solutions to the puzzles, and it eventually makes you a master of the Portal gun and its associated physics — without a single page of documentation. You learn about the Portal universe intimately, but you don’t notice the learning because you’re too busy playing.

This is precisely the type of learning I was referring to above and in previous posts. Learning on the fly, no documentation, just a fully immersive environment culture.

In addition to not knowing what the hell is going on in terms of the plot, the first time you play Portal, you have no idea how to play it. Like all games, the initial levels teach you the very basics: how to move, how to pick up an item, and how to use items to get things done. Yes, there is a heads up display indicating how to move, but it’s up to you to learn. Oh look, when I put the cube on the button, it opens the door… to where? The plaques at the beginning of each level seem important, but I don’t know why. Why do I feel something sinister is going down?

The mystery of the player not having a clue what the hell is going on is the initial incentive to learn. It’s the desire to discover the story that situates the player in the Portal universe. It’s a difficult balance to strike in designing a game or application. How much do you explain versus how much do you let them discover? Too much explanation and you get this [image of a complicated user interface]. Too much reliance on exploration and they may never discover what they can actually do.

Think back to your initial on boarding at your organization. You probably didn’t have a clue what was going on. You learned the basics first, how to move around, how to get and use your security pass, how to negotiate early relationships and other general housecleaning items.

Not knowing how your organization worked was incentive to learn. As was trying to figure out your own role within that organization. The key difference here is that no one actively thought through how much to explain to you versus how much to leave you to discover. You probably got the overwhelming walk around, the deluge of forms and the quiet desk time in (probably in that order).

Unlike the video game, very little forethought was given to how you’d react to the system around you. Which, on your first day at the office, is just as much of an unknown as a first encounter with the Portal universe. However, much like the video game, too much explanation (in the form of “hey read this enormous pile of documents, they will help you make sense of the environment”) and you’d tune out. While too much freedom to discover everything on your own would leave you wandering aimlessly in and out of people’s cubicles for days (I’ve experienced both of these during different organizational on-boardings).

More on this from Rands:

As the game progresses, the increasing complexity of the puzzles introduces a bevy of hazards, including high energy pellets, goo, and turrets. The goal remains the same: get out – don’t die. This is a tricky inflection point for any game: the arrival of the puzzle which is no longer a straightforward challenge, and I believe Portal’s developers have solved for this moment in two ways.

First, Valve play tests the hell out their games. They are intimately aware of when a chamber is too laborious, too complex, or introduced before the player has learned the lessons they need to satisfyingly solve the puzzle in a reasonable amount of time. This is essential testing that must be performed again and again to find a delicate balance providing a sense of progress and accomplishment with just enough challenge.

This is a critical inflection point where the user is weighing the following: is the amount of investment I’ve made to date worth banging my head against the screen trying to figure out what to do next?

As you progress through your career your work becomes more complicated, but the goals remain the same: get your work done – don’t screw it up. Similarly you are likely to reach that key inflection point where work is no longer straightforward. Perhaps you no longer have a boss who hands you the work with a clear set of expectations, you are moved in a reorganization, etc.

The key difference here is again that no one actively designed and tested your work flow (or for that matter your career path). No one is intimately aware if your workflow is too laborious, too complex, or if you’ve been put into a situation before you learned all the prerequisites. As with the video game, this may be essential testing, yet unlike the video game it isn’t performed rigorously – it probably isn’t even tested at all.

As a question, I’d frame it thus: do those who have set your organizational structure have any expertise in organizational design? Have they tested multiple workflows, solicited feedback and chosen the most effective blend from the options available to them?

I think we all know the answer to that.

Yet again, as Rands points out, you will eventually reach a critical inflection point where you, the employee, is weighing your options: is the amount of investment I’ve made to date worth banging my head against the wall trying to figure out what to do next? Is it time to escape cubicle nation?

Inevitably, you’re going to need to make a split-second decision in Portal. The floor will literally be vanishing from under your feet and you’ll have no time to consider your options; you will just improvise. It’s these moments of well-informed improvisation that I believe are Portal’s greatest accomplishment and best design. See, while you were busily having fun you had no idea that you were becoming an expert in the ways of the Portal universe. You now have experience using each of the individual tools and their behaviors to be able to combine them to handle the unexpected. The result: you are now able to effectively deal with novel and unknown situations.

It’s incredibly satisfying to sneak out of a tight spot by performing an action you didn’t know you could do, but created instinctively because of your experience.

That’s how I want to learn. Don’t give me a book; I don’t want a lecture, and I don’t want a list of topics to memorize. Give me ample reason to memorize them and a sandbox where I can safely play. Test me when I least expect it, shock me with the unknown, but make sure you’ve given me enough understanding and practice with my tools that I have a high chance of handling the unexpected.

A video game has a very different goal than [a program like] Photoshop. A video game is designed to be pure entertainment, while Photoshop is a tool by which you get work done. A game designer knows that if a game isn’t both immediately entertaining and usable, the folks sitting in front of the Xbox 360 are going to stand up, toss their controllers on their beanbags and declare, “Screw it.” Worse, they are going to tell every single one of their friends about this gaming disaster because they feel stupid for wasting their time and money on something that was supposed to be fun, but turned out to be lame. This is game death.

Photoshop’s goal isn’t entertaining unless you think the national pastime of bitching about Photoshop is a sport. Photoshop has no points or leaderboards because Photoshop is a tool and the perception of tools is that you must be willing to supply blood, sweat, and tears in order to acquire the skills to become any good at using them.

Make a list. Tell me the number of applications you use on a daily basis where there is a decent chance that you’ll end up in a foaming at the mouth homicidal rage because of crap workflow, bad UI, and bugginess. Is Photoshop on that list? Yeah, me too.

I know, I know, you are thinking: “A video game has a very different purpose than an organization, especially a public sector organization. Video games are about having fun, organizations are about getting shit done. Fun isn’t important, and in order to get things done we must be willing to accept and work within the confines of the status quo.

List the organizations that you’ve worked for where on a daily basis there is a decent chance that someone inside the organization might choose to just walk away because of crap workflow, non-nonsensical rules and a lack of follow through. Is your current employer on that list?

Rands on why design is important for learning:

Great design makes learning frictionless. The brilliance of the iPhone and iPad is how little time you spend learning. Designers’ livelihood is based on how quickly and cleverly they can introduce to and teach a user how a particular tool works in a particular universe.

Perhaps there is something to be said about creating a similar economy where the livelihood of the powers that be would be based on how quickly and cleverly they could introduce to, and teach us how to solve, the big challenges this sector is facing?

If we put as much effort into designing our organizations and their workflow as Valve does with its games perhaps our work could be as engaging as playing a game like Portal.

Final note I highly recommend adding Rands to your required reading; he consistently publishes thoughtful long form writing and is one of the few writers that have been reading consistently since I myself started writing.