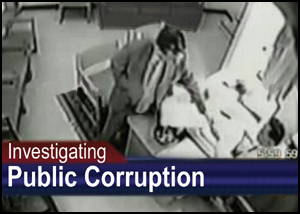 Misconduct by public employees in state (and local) government used to be simple and hard to track. Generally, only one person—usually male–breached a position of public trust to serve often private needs.

Nowadays, you’ll hear broadcasts or read articles about yet another tax-paid official—both genders–charged or being sentenced.

Seems misconduct is rampant everywhere. Some may tire of hearing about these ever-occurring incidents. Indeed, technology has democratized and speeded up chances for one to engage in and be caught doing “bad behavior.”

Are there places in America where the outwardly self-virtuous might be able to act in a not-so-obviously-seen amount of on-the-job mischief, and not get caught? Jorge Martinez-Vasquez admits in his world-acclaimed book, Fighting Corruption in the Public Sector, that “corruption is notoriously hard to measure in a precise way.”  Findings presented within this report may indeed appear to depend entirely on how “public corruption” is actually measured.

The District of Columbia-based Center for Public Integrity’s website, stateintegrity.org, tracked 330 separate ethics, transparency and accountability metrics for each government. They found the five governments with the lowest venality risks to be New Jersey, Connecticut, Washington, California and Nebraska.

The Daily Beast looked at the same FBI data The Times had for the identical period, but focused on tax-paid workers exclusively engaging in prosecuted Racketeering, Extortion, Forgery, Counterfeiting and Fraud incidents. The Beast results appear to not be partisan exclusively toward “smaller” regimes, noting Montana, Indiana, Wyoming, Illinois and Massachusetts has the least state and local employees “put away” after a federal trial.

Business Insider looked at convictions on a per 100,000 population basis, from 2002 to 2011; the “least” were found in South Carolina, Oregon, Washington, Minnesota and New Hampshire.

What are common “traits” of entities having smaller numbers/rates of the “guilty?”

–POPULATION SIZE: Maybe readily apparent that sparse population areas have less incidents (i.e. Vermont, Wyoming). Yet North Dakota, with 740K people, was the target of a 2008 USA Today, story claiming the Peace Garden State had “the most corrupt public servants per 100,000 citizens.”

–POLITICAL CULTURE-ECONOMY: A majority of states with fewer workers sentenced (WA, NE, VT, WY, NH, ME, MT, OR, MN) have a prevalent Moralistic Political Culture. In those places, society’s well-being is held as paramount; governance promotes the “public good;” politicians are expected not to profit from political activity.  They tend to also have a strong Political Economy – reporters, citizen groups, prosecutors, judges, religious leaders are willing to actively speak out and root out, any rampant corruption in their midst.

We conclude with an observation by the Washington-based Corporate Crime Reporter. Their research has found “…little correlation between strong laws and integrity–if a public official wants to violate his or her trust, the laws don’t stand in the way.”

SteveWonder aka Steve Spacek is author of the American State Litter Scorecard research and website.

Thanks again to Catherine at GovLoop for allowing this helpful posting!