Don’t worry if you don’t immediately recognize the verbiage, “taking an arrow to the knee” is an internet meme popularized by the action/role-playing video game Skyrim. In Skyrim …

… the town guard non-player characters (NPCs) have several stock lines they repeat when the player walks near them, including a bewildered statement about “curved swords”, a patronizing statement about “sweetroll” theft, and the melancholy confession “I used to be an adventurer like you, then I took an arrow in the knee.” The restating of such a specific story over and over again by so many different guards caused it to be noticed by players, who then proceeded to post about it in gaming forums and image boards. — Know Your Meme (emphasis mine) 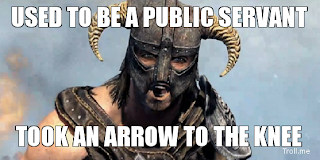 So what does a common regret, uttered by otherwise unmemorable would-be adventurers, popularized by the Internet meme machine possibly have to do with the public service?

In a word: everything.

Skyrim relies on a non-linear model of gameplay, meaning that the game doesn’t follow a strict path but rather leaves players to explore, discover, and interact with the world on their own terms. In practice this means that Skyrim is less of a game and more of an experience, it also means that the player can exert a significant amount of control over that experience. Players shape the game as much as the game shapes the player, or more rightly their playing style; and while every game of Skyrim starts the same way, players soon realize just how expansive the universe is, and just how many paths are available to them. As someone who has played a significant amount of Skyrim over the holiday season, I can attest to the fact that the game’s natural ability to conform to my playing style, interests and goals (even as they change) has undoubtedly contributed to its wild success.

In short, I think that Skyrim delivers an experience on a gaming console that many people are seeking in their careers, namely a completely customizable experience that evolves as they evolve; that perpetually follows their interests; that keeps them challenged/engaged; and that allows them to prioritize their actions and execution (deliverables) in the way they see fit.

As such, I also think it’s a perfect proxy for the Internet age’s preferred narrative of life as a young professional: self-centric, entrepreneurial and adventurous. But Skyrim also:

If Skyrim is in fact a good proxy for the Internet age’s preferred narrative, then examining the difference between the roles of adventurer (the player in Skyrim) and the city guard (the non-playable character who takes the arrow to the knee) is worthwhile.

The adventurer is free to roam, explore, and develop their skill set. They travel the land, find new challenges and have a considerable impact on the world. In fact, when the adventurer enters a city, they often overhear the guards talking about recent events, events that always revolve around the actions of the adventurer themselves. On the other hand, guards are confined to the city, they meander about its walls, and lament lack of excitement in their work. If only they hadn’t taken an arrow to the knee! Instead, they suffered an injury that forces them to do something they would otherwise not do: accept a position on the periphery and settle for talking about the events around them rather than actively shaping them. My observation is that risk-averse organizations are similarly polarized, which is to say (and thereby continue the metaphor) they are made up of adventurers and guards; those who define themselves and those defined by the system around them.

Of course, I’m not speaking in absolutes, but rather trying to tease out an important point of comparison. My travels across Canada and the United States have afforded me the rare opportunity to speak with public servants from different levels of government, geographical areas, and functions. Overwhelmingly they all share a single concern: the loss of their adventuring spirit. Interestingly, when I pressed these would-be adventurers, many revealed that they never actually suffered an arrow to the knee themselves, but rather feel (or have been outright told) that they will undoubtedly suffer one should they become more adventurous.

I wonder how many public servants have actually suffered an injury so severe as to limit their ability to be bold, or to seek novel solutions to complex problems? I get a sense that there is a fundamental disconnect between the stories we hear (and sadly perpetuate) about the reality of those on the edges of our organization. Culture is built on stories, and if we only ever tell the ones about risk and negative consequences then those two things will ultimately define our culture. Is it any wonder that rather than being encouraged to be bold and adventurous, many of us are, like the city guard, left to meander about our cubicles or blend into the machinery.

Again, I’m not trying to be insulting, this is simply a metaphorical articulation of what a risk-averse culture could (and often does) look like; and while it is clear to me that the culture may inhibit those inside the organization, it must also be said that it inhibits those looking to join it. The people that buy Skyrim, don’t buy it to play as the city guard, they buy it to play as its central character. Similarly, public servants shouldn’t settle for playing roles on the periphery of their organizations. Instead they should be actively building careers as central characters, pushing other protagonists to elevate their game while simultaneously sharing and collaborating with them. Because I for one am tired of hearing about a culture defined by “arrows to knees”.

Great post, Nick! You make a great point on the importance of stories in building culture and their ability to make those who haven’t actually taken an arrow to the knee to act as if they had. I’ve definitely seen evidence of this (and am probably guilty of acting like I have once in a while). I think organizations could really make a difference by promoting the stories of those who were bold and achieved success by taking (smart!) risks.

Thanks Steve, just read the other one Andy 🙂

First of all that is just too funny, primarily because I am familiar with the game, I had to chuckle as soon as I read the line. Your analogy is also quite creative and your points are well taken. I believe however, that because I have been working in the public sector for over twenty years I have a somewhat tempered view. Those of you just starting out in public service must be wary of the politics that is ingrained in many public agencies. You may have to join the equivalent of the”Companions” or the “Theives Guild” and carry out their assignments to advance your career regardless of your admirable skills and experience.

Preston – I love the connection to the guilds that you just made there… Awesome.

Youth does have its exuberance, however…. The real question is not the “Arrow to the Knee” philosophy, but rather how to change the “Arrow to the Knee” culture (and a touch of reality added here, do we even want to change it). And, the focus is the real word, rather than alternate pseudo reality of a video game. In the real world, there are very few chances just to reset or start all over with no harm coming to you (not to mention the current state of the economy and the fact that more governmental agencies at all levels are in the reduction in force mode, rather than the building up, or even status quo mode). Human beings, or at least sane human beings, have this one universal trait, and that is preservation (which is associated with risk taking). And successful humans will quickly adapt to their environment and learn how to first gain preservation (if they don’t, they are quickly removed from the gene pool so to speak), and then second to advance in the environment. Failure to learn from other’s mistakes is fool hardy at best. When someone gets an “Arrow to the Knee” from recklessly exposing themselves, others should quickly learn not to do that. And, the governmental sector is the worst about it (just look at all the “fall out” from “Fast and Furious” and all the people looking for the “reset” button, remember, the civil service reports to the people, not some entrepreneur ). In the Government, it isn’t some entrepreneur’s money being spent, but the hard earned money of the people. And, I for one want to see my tax money spent wisely, rather than on risky adventures that may or may not pay off. Further, the higher one gets in this environment, the more they want to preserve the “environment” that enabled them to obtain their more lofty position. The bottom line is that “governmental sectors” are very non-forgiving concerning the proverbial entrepreneurial mistakes (which in the current budgetary austerity, just can’t be afforded). Thus changing the climate is something that takes years, if not decades, and comes in so many little slow changes that it is truly a slow evolutionary process rather than revolutionary. Another huge factor is not everyone is cut out to be an innovator, nor does everyone have the capacity to be an innovator. Many are totally happy to be a part of the machine, and they are needed also to keep the machine working. Foremost, there are no medals, awards, hero status, etc. for failed revolutionaries [adventurers]! Failed revolutionaries, after their second mistake, will find themselves looking for the reset button someplace else, which is the ultimate “Arrow to the Knee” that maybe we all should learn from.

Great post! Though I’m not familiar with Skyrim, I’ve seen games like it and can appreciate the analogies.

Preston nailed many of my thoughts. After 20+ years working in the public service space, my view is similarly tempered. Politics are a big factor in this game. It is a reality that we often have to join (or start) the equivalent of “Companions” or “a Thieves Guild” to get stuff done.

The individual adventurer is amusing and sometimes romantic, but not usually effective in the long run. It’s one of the reasons I started hanging out in online forums like GovLoop. We all need a team. I was hoping to find people of like mind and commitment here.

I’ve been “adventurous” and have taken several arrows – both as an individual and on behalf of the teams I’ve led. The arrows that hit or even grazed my team and I, hurt. I won’t lie. Finding out who was shooting them sometimes hurt even more.

I don’t endorse letting those arrows – or the threat of those arrows – turn any of us into a grumbling gate guards though. I always felt I and the people I worked with answered to a higher authority than my supervisor or an individual agency. You would be surprised what you can survive when you believe you’re not the most important thing in the universe.

I’d leave government service before I let the it crush me. It’s just a job.