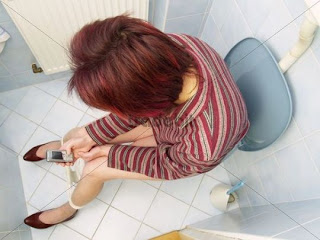 17% of Twitter users vs. 12% of non-Twitter social media users had accessed social media from a washroom or toilet

And how many are male and missing their aim?

11% of Twitter users admitted to accessing social media while driving in the preceding 30 days, compared to only 5% of other social media users (my emphasis)

To be reminded of the consequences of this very bad behaviour see my past post Texting + driving = death.

Twice as many Twitter users as non-Twitter social media users (8% to 4%) had accessed any social media from a theater during a movie or live performance (during the preceding 30 days).

Nearly three times as many Twitter users as other social media users have accessed social media from restaurants (31% vs. 12%)

Can I say ‘potential violent reaction’?

41% of Twitter users prefer to contact friends via social media rather than telephone, compared with 25% of non-Twitter social media users, and 11% (vs. only 6% of those not using Twitter) actually prefer social media over face-to-face contacts.

14% of Twitter users said they have revealed things about themselves in social media that they wouldn’t under any other circumstances. Then again, 8% admitted to “frequently stretching” the truth about themselves online.

Putting your job/career/marriage in jeopardy?

What are we doing to ourselves people!?!

Agreed…heard from many (myself included) that the significant other is not the happiest with the social media obsessed…trying for some phone free.social media free..time.

Thanks – definitely food for thought for those who think that “picking up the phone” is always the best way to communicate.

I hate it when people are talking or texting the in the stall next to me! It is the worst when I try humming to get rid of the thought that they are talking to someone in the stall, and they ask me to sheesh. WTH? I get louder! OH how I hate that! Please, people, would you invite your boyfriend / girlfriend / coworker / business person / dr etc into a public female bathroom with you? I mean seriously? Would you? Yes, this is one of my greatest pet peeves.

And yes…. I agree many people are putting way too much info out there about themselves to strangers. Instead of DWI, many people FBWI. Many people need to remember … more than one drink means no driving…and NO drunk Facebooking. WOW the photos and the post I have seen after people get drunk. LOL Yep, very funny. Worse than an office Christmas Party. 😉

Look on the bright side; maybe twittering will one day help siamese twins get to know each other better.

Twitter, along with other social media, is changing our world and I am addicted. I am hoping people still remember to smile, to hold doors open for people, to stop in and see how someone is doing, all that stuff that makes physical, tangible human connections live on and on! Anyone need a hug…..?

Excellent discussion of the current state of Gov 2.0