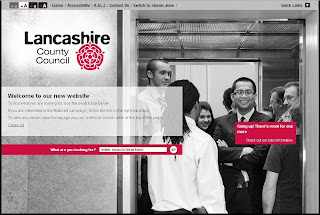 There’s been a great flurry of interest in local government webbie circles because a few councils have gone down the Google route of deliberately reducing homepage content and pushing search as the way to find what you’re looking for, what you want to do, what your task is.

Lancashire’s Kevin Rainsbury told the lively thread on the Communities of Practice (CoP) website that:

We’re at a relatively early stage in development but felt it was worthwhile launching in its current state as it was able to provide customers with something better than what they had previously. We did a fair bit of customer research which led us down this path. We’re also aware that the new site might “ruffle a few feathers” given it’s such an unorthodox approach for a local authority. The Socitm Better Connected review will be of particular interest this year!

(I asked, via Socitm, for more information on any research or prior-to-launch testing within development by Lancashire and Westminster but as of the time of writing this hasn’t appeared.)

On the rest of the thread and in blog post comments council webbies were divided on the sites. Some cheered the innovative approach – ‘It is good to know Lancashire is one of the councils thinking out of the box’ – whilst others found fault (eg failed search results) or questioned the usability. .

Feeding back from experience, one webbie said:

When I’ve carried out user testing I’ve often found that participants are fairly evenly split between ‘expert’ users who like to search for information using a search engine and ‘novice’ users, who are less confident and like to browse and click on links. Some people just happen to feel more comfortable when they have some hints about what to click on. Even better if the links they can click on are relevant to their goals. In comparison to Lancashire’s site, the Westminster site does place popular tasks under the search box.

This experience reflects not just use of council websites but longstanding experience of websites in general: it’s also common sense that users would be split between novices and experts (and a mass in between). However one comment made clear that this understanding hasn’t got through to all council webbies:

Search is something that has to be pushed at people more. I get tired of reading complaints from the public saying “I tried to find X on your site, but I HAD to use the search” – like the search on a website is some sort of last resort form of torture. 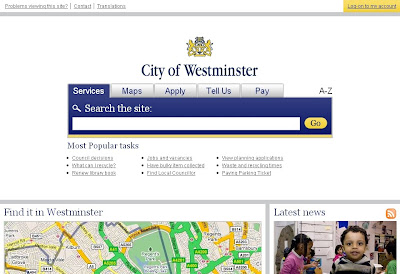 Forcing rather than following users

Another reviewer noted that Westminster’s design included navigation options ‘below-the-fold’ (meaning that users have to scoll down). This, and other comments, stood out for me as part of an unfortunately common mentality in the public sector, that a design is fine simply because the ‘option’ is provided – somewhere on the page or via a link. But a lot of users simply won’t scroll, or see something ‘obvious’ to you.

For example, Jakob Nielsen’s study on how much users scroll (in Prioritizing Web Usability) revealed that only 23% of visitors scroll on their first visit to a website. This means that 77% of visitors won’t scroll.

So Westminster and Lancashire are actually doing what the commentator above wants them to do – effectively ‘pushing search at people more’.

Hearing from an expert

I spoke with web design authority Gerry McGovern about Lancashire and Westminster.

There are ‘rules’ which come and have evolved from best practice which comes from experts over many years now observing how users actually behave. There are ‘heuristics’ which are established principles for user interface design (web pages).

My understanding of feedback from user studies is that ‘search is the user’s lifeline when navigation fails’, and also from what you have written and said that navigation should be improved. Therefore it is a mistake to hide it on a homepage.

[You] need to look at who the homepage specific audience is and that most users actually arrive elsewhere so a homepage focus can be a distraction from addressing user’s main needs, such as being able to complete tasks from wherever they arrive and ensuring that search and referral traffic is sending them to their goals. As well, that reliance on search means a lot of working on tweaking and refining results and results presentation.

I think it’s an interesting experiment, particularly what Lancashire is doing, but I basically agree with your points. Search and navigation should go together. Often what happens is people search to get roughly in the right direction and then navigate the rest of the way. But many will, as you point out, navigate once they’re presented with good logical links.

I think Westminster has got more of a balance; they have brought the top tasks onto the homepage as well as the big search area.

The fact that the search will have to be tweaked is a good thing. Really managing search is very important so to have a big focus on quality search is great.

You’re also right about the decline in homepage importance. Because a great many are starting at Google it means that they will often end up on a deeper page. 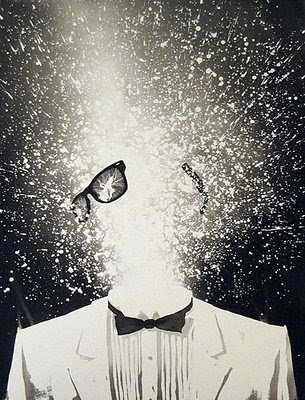 Why does this keep happening?

The apparent absence of user-testing within an iterative design process – what I would describe as standard industry best practice – happens in the case of council website design as a result of, as Carl Haggerty:explained in his blog post about the Lancashire and Westminster developments, “a wide range of influencing factors that will impact on the local webteam to make particular choices.”

He identified those factors as:

I don’t think it’s chance that Carl happens to put customers as the last bullet point but I think council webbies are scoring an own goal in their desire for website improvement if they don’t prioritise customer feedback, especially through user testing.

For example, and this is one I have cited before. When I conducted guerilla testing for a new design it became immediately obvious that the main link through to online services was simply not being seen by users. All of them were missing it, it might as well not have been there. This was because of a common, known usability issue but one on which I’d found myself over-ruled as I wasn’t ‘the decider’.

Because I had gone and done some cheap’n’easy testing and got a unanimous result I was able to get that design redone – because what would the counter-argument be? ‘I know better than the users’?

The customers are the biggest weapon in a council webbies armory against those factors that Carl cites but how often are they used?

Is design consistency a bad thing?

Why are we all taking a separate view, if we all have the same goals in mind, why haven’t we all developed identical looking sites with just a logo or some colour change as the main difference?

Shouldn’t we all agree to a consistent approach, purpose and some principles for local government websites (including the homepage) that we can at sign up to?

I wonder about this too. 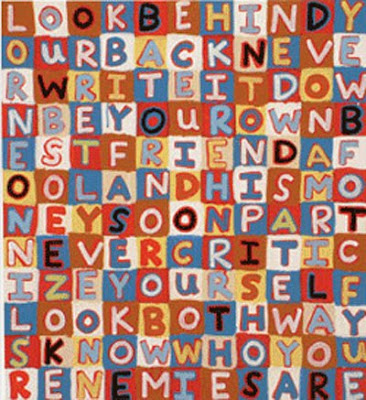 Many governments, such as in Canada, Hong Kong and Singapore, have adopted common look’n’feel policies, which dictate design boundaries. Others, such as the American government and various Australian states, have provided for some years now both policy and guidance as aides for government webbies.

The UK doesn’t have any of this.

The new COI usability guidance isn’t meant for local government sites – and doesn’t mention guerrilla testing. Socitm’s Better Connected has radically improved from being a lengthy tick-box list to honing its message but still has some way to go.

Exercises such as my friend Dave Briggs’ ‘crowd-sourced’ What makes for a decent Council website? have serious problems in my opinion with introducing bias, their usability and not necessarily being customer-led. I also remain unconvinced by Idea’s developing ‘Knowledge Hub‘, for similar reasons.

To answer Carl’s question – “why are we all taking a separate view, if we all have the same goals in mind?” – I would look at:

You have to ask these sort of hard questions (and others, such as I’m not at all sure if “we all have the same goals in mind”) to truly answer Carl’s.

Simply put: I would question, with I think good cause, a rush for ‘innovation’ whilst some extremely basic yet to me obviously un/der-recognised problems still exist.

Addendum: Following a Twitter exchange with local gov web manager Julian Scarlett, a point occured to me with both common look’n’feel and better information provision and general support for local government web development.

‘Interesting development’ requires resources and – with a few exceptional exceptions – this is not found in smaller population districts. This is another reason why there is such a huge disparity with the quality of local government websites.