Operational efficiency is one of the four technology tenets of a smart community. It takes many forms, but it essentially involves developing new ways of working that enable agencies to optimize the management and performance of internal operations and constituent services. New workflows can reduce the cost of and time it takes to deliver existing services and make new services possible. 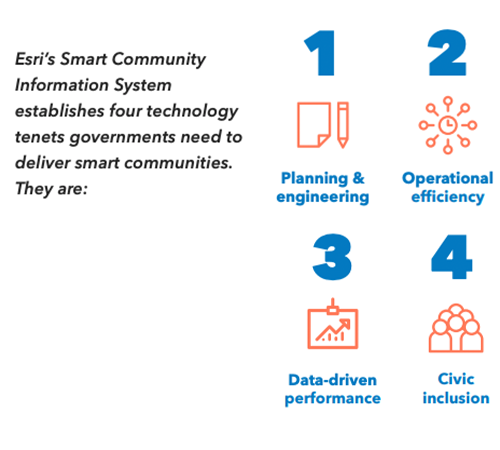 Improved operational efficiency also strengthens the other tenets (see image to the right). And geographic information systems (GIS) is the foundation, as it provides communities with a platform for gathering, visualizing, analyzing and sharing data.

For major airports, the ability to effectively handle high-value cargo is essential to remaining competitive. They need transportation distribution and logistics operations that can unload cargo from airplanes and move it quickly to regional warehouses and distribution centers, which typically are located three to five miles outside the airport.

Over time, Detroit has been feeling competitive pressure from Chicago and Toronto, whose airports had a growing volume of cargo business because of their good ground handling facilities.

The Detroit Region Aerotropolis Development Corporation, which facilitates economic development in the area, decided that rather than simply try to keep pace with the capabilities of other airports, Detroit should leapfrog them. The idea was to build “highways in the sky,” using commercial drone services to move cargo, bypassing traffic jams and other hazards that can slow the movement of cargo.

Such a program faced several challenges, however. First, the program would need to connect seamlessly with the Federal Aviation Administration’s (FAA) Low Altitude Authorization and Notification Capability (LAANC), which provides drone pilots with access to controlled airspace.

The program also needed to ensure that drones steer clear of hospitals, helipads, electrical substations, schools and other sensitive areas. Finally, it needed to be sensitive to residents’ concerns about drones flying over their private property.

The “highway in the sky” goal sought to map out routes that deliver cargo efficiently while also avoiding private property, critical infrastructure and other restricted areas.

As part of a six-month, $60,000 grant from the Michigan Economic Development Corporation’s PlanetM (mobility) initiative, the Detroit Region Aerotropolis worked with Airspace Link, which provides a GIS-enabled platform for planning drone flights. The platform integrates FAA air data with ground data from state and local agencies to develop flight plans that comply with local regulations and ordinances and reduces flight risks and then submits the plans to the LAANC.

“GIS created a standard. If we had to create crosswalks or interoperability between multiple data platforms, I think this project would have been a two- to five-year product.” – Christopher Girdwood, Executive Director, Detroit Region Aerotropolis Development Corporation

ArcGIS is critical to the program because it serves as common ground between the various data sources. Without it, the program would have gotten bogged down with interoperability issues that would have delayed it considerably.

This pilot project could be a game-changer for the commercial drone world. Current regulations do not allow drones to fly out of the operator’s sight because of safety concerns. The “highway in the sky” might be a model that makes it possible to lift those restrictions.

This article is an excerpt from GovLoop’s recent industry perspective, “Smart Communities Turn to GIS to Improve Operational Efficiency.” Download the full report to explore other examples and the ways in which geographic information systems can help communities gain operational efficiencies. here.