If all goes as planned, by 2022 federal agencies and their vendors should be tracking and communicating the value of information technology investments in a more transparent and standardized way.

This standardized approach known as Technology Business Management (TBM) has been gaining some traction in the federal government following the 2014 passage of the Federal Information Technology Acquisition Reform Act, but under the President’s Management Agenda (PMA) agencies will have four years to adopt the TBM framework governmentwide.

One of the primary goals here is to “enable federal executives to make data-driven decisions and analyze trade-offs between cost, quality, and value of IT investments,” according to the PMA. In other words, there should be a lot less tech jargon and emotions-based discussions, and more data-driven conversations about how IT improves citizen services, lowers costs, improves security and makes employees more efficient.

In short, TBM provides a set of best practices for categorizing IT costs, technologies, resources, applications, and services, and for effectively communicating what business value IT investments actually provide. The General Services Administration and Washington state are among the government agencies leading the charge in TBM adoption. But much of the talk around TBM in government has focused on the IT community, leaving plenty room for more education and buy-in across other areas such as finance and procurement — both of which will play key roles in successful TBM implementations.

Speaking at the July 11 TBM Public Sector Summit in Washington, D.C., Federal CIO Suzette Kent shared how TBM ties into the President’s Management Agenda and the role it will play in driving efforts like IT modernization, shared services, improved customer experience and the government’s forthcoming data strategy.

She pointed to data in the PMA showing how early adoption of TBM drastically improved agencies’ ability to track IT spending with more granularity and clarity (See the chart below from the PMA). The expectation is that having this type of detail will help agencies make tough decisions like where to spend limited dollars, whether a move to the cloud makes sense for a particular system and areas that may be ripe for cost savings. 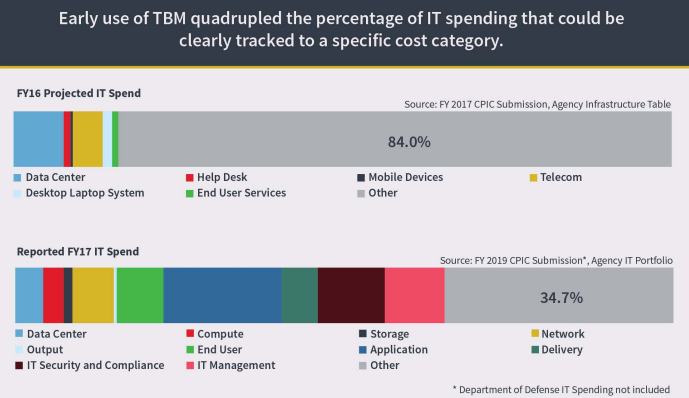 “What we’re moving to is an environment that is more data-driven, more transparent, we have clarity of where we’re putting taxpayer money, but more importantly we have visibility to the outcomes that have been achieved and that we can show those through data at any point in time,” said Kent, who was a principal at EY before coming to the White House about four month ago.

This administration’s vision for TBM adoption extends far beyond the IT community — to include finance, acquisition and the executive suite — and even government contractors.

In the private sector, companies like Exxon Mobile, finance and insurance corporation AIG and Master Card are among the 3,000 public- and private-sector organizations that are involved with TBM, said Anil Cheriyan, Chairman of the nonprofit TBM Council.

“It’s all about moving from compliance to value,” Cheriyan said.

Kent acknowledged that TBM adoption won’t be a simple task for many reasons, including the fact that agencies are at different places in terms of understanding their specific IT costs. She also said TBM will not be a check-the-box exercise but rather focus on reframing how government serves the public.

Across government, TBM implementation has been met with both confusion and optimism. Government employees who will actually be doing the work want assurance that TBM is not another passing mandate that phases out once administrations change. There are also questions about who within the workforce will carry out TBM implementation and whether this effort will become just another compliance exercise.

As an early TBM adopter, GSA CIO David Shive fielded these and other questions from the government community during his presentation at the TBM summit.

Shive suggested that agencies not view TBM as an OMB compliance exercise because although it does provide detailed reporting up to the White House, TBM is ultimately a tool that has the greatest benefit at the agency-level.

Since starting TBM implementation on a small scale in 2013 and then deciding to go all-in with TBM a little under two years ago, GSA has gone through its own rough patches. Based on those experiences, Shive recommended that agencies develop clear goals and key performance indicators that state what the agency hopes to achieve with TBM. For example, GSA focused on applications and knowing the total cost of ownership because apps are the lifeblood of how the agency serves citizens.

He also recommended that the acquisition, finance and IT departments work together from the ideation phase and that agencies use agile to make incremental changes, test them and adjust accordingly. In terms of staffing, Shive said the GSA team focused on Capital Planning and Investment Control (CPIC), or the current governance and management methodology agencies use to evaluate the performance of IT investments, were asked to take on more work as GSA adopted TBM.

Ultimately, the hardest part is often getting started with the data, team and tools you already have. Shive’s advice: “Get started now. Don’t wait, just get started now. It doesn’t mean you have to buy a tool [or] stand up a big team. Give your team a little time and space to think about how to show value and provide transparency according to [the] TBM framework.”

Really insightful piece, and I especially liked the call to action from CIO Shive!

[…] information technology investments in a more transparent and standardized way, an approach known as Technology Business Management (TBM), the use of business cases to drive tech spending is […]

5 Questions to Ask to Get Ahead in Your Career

Which Sessions Should You Attend at NextGen?