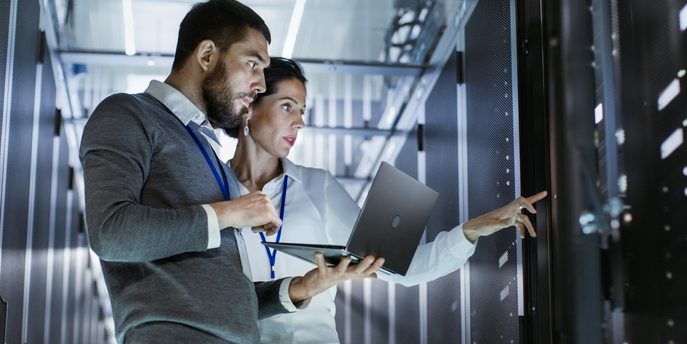 As technologies continue to evolve and grow, the infrastructure that supports these next generation tools must evolve and grow too. Agencies require storage to house the trillions of data points they collect, computing power to fuel citizen applications, and networking to connect all the applications that keep government running. But maintaining this complex web of systems can be challenging.

To understand how agencies can transform their infrastructure and lay a better foundation for innovation, we heard from Kurt Steege, Chief Technology Officer for ThunderCat Technology, and Dale Degen, Cloud Infrastructure Business Director at NetApp. They joined us at our recent Government Innovators Virtual Summit, to explain how hyperconverged infrastructures (HCI) can consolidate and optimize government IT.

Before diving into solutions, Degen and Steege outlined the big challenges facing current government infrastructures. Those include:

Together, these challenges impede agencies’ ability to move forward and adopt new tools that meet the demands of the digital age. Agencies know they need to modernize, but the traditional infrastructures on which they rely simply aren’t up to the task.

“The first shot at this was converged infrastructure,” explained Steege. Convergence consolidated many aspects of traditional infrastructure, but it didn’t achieve the results agencies wanted, he said. Specifically, many agencies didn’t see a significant decline in rack space and data center sprawl that they hoped for. It wasn’t quite scalable enough to meet the agility needs of government.

That led to the next evolution of infrastructure to hyperconverged infrastructure, or HCI. HCI provides smaller data center footprint, smoother implementation, increased security through visibility and the ability to move to cloud. It is a software-defined approach to infrastructure that consolidates the critical capabilities of networking, storage and computing into a single box.

“The concept of HCI is that you can start with one building block, and then you can build on it as you need it,” said Degen. With everything in one place, agencies can achieve:

In other words, HCI solves many of the problems associated with traditional infrastructures and it helps agencies increase their agility. But according to Degen, implementation of the right HCI platform is just as important as adopting the technology at all.

In some instances, agencies will adopt HCI solutions in silos – achieving some scalability but still limiting its potential application to the organization-at-large. That’s why NetApp provides an all-flash, enterprise HCI. That provides larger scale and more automation, as well as greater quality of service, than other HCI solutions.

In NetApp HCI, each volume is configured with minimum, maximum, and burst performance levels. The minimum setting provides a guarantee for performance, independent of what other applications on the system are doing. The maximum and burst values control allocation, enabling the system to deliver consistent performance to all workloads.

Plus, NetApp HCI has an open and flexible architecture that lets agencies leverage their existing virtualization infrastructure, licenses, and external compute to lower initial acquisition costs and repurpose existing operations.

NetApp HCI streamlines installation through an intuitive deployment engine that has automated more than 400 inputs to fewer than 30 to get you up and running in about 45 minutes. In addition, a robust suite of APIs enables seamless integration into higher-level management, orchestration, backup, and disaster recovery tools.

Finally, the NetApp HCI works with the NetApp Data Fabric, which enables customers to respond and innovate more quickly because their data is accessible from on premises to public cloud.

Hyperconvergence solves these problems by offering agencies cost-savings, simplicity and agility. Specifically, the NetApp HCI solutions allows agencies to move forward and adopt the new processes and tools they need.

Check out the rest of our coverage and insights from the 2018 Government Innovators Virtual Summit:

Ready for Takeoff: The Role of FedRAMP in the Path to Digital Transformation