Arrieta, the Chief Information Officer at the Health and Human Services (HHS) Department, has made a career out of placing small bets in the government technology and acquisition spaces. These calculated risks have evolved over time. They’ve opened the door for multi-million dollar savings and are poised to change the way some 3,000 acquisition professionals at HHS use data and technology to make more informed buying decisions. 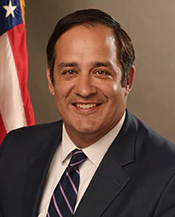 A little over a year has passed since he first came to HHS, and Arrieta spoke with GovLoop about his journey to becoming an innovator in government. We also discussed how he has used his strengths to take managed risks and improve operations with emerging technologies.

Although his name has become synonymous with blockchain, Arrieta sees these and other emerging technologies as a means to an end. His philosophy is that organizations shouldn’t outsource their brains to technology. Instead, they should use it to ask smarter questions.

His advice: Get an understanding of what your strengths are, what you understand really well, and try adding value in those areas using emerging technology.

“I truly believe this: Without my understanding of acquisition, I don’t think that I would have been able to proof, pilot and even scale on some level, some of the capabilities that we’ve been able to put together,” he said. That was true for the blockchain proof of concept he spearheaded while at the General Services Administration (GSA) to speed up federal procurement contract review and make it easier for vendors to establish contracts.

And even before that, he used his acquisition know-how to better communicate with industry. “When I was the industry liaison for DHS [the Homeland Security Department], we taught about myth busters and communicating with industry,” Arrieta said. “I had done large solicitations, and I was much more comfortable with — before even developing the solicitation —  having a conversation with industry to get an understanding of the capability set that existed in the market. When you have a comfort level, and you’re open to talking to industry, you can get an understanding of what’s going to incentivize them to take risks and bid on your opportunity.”

Following his own advice, Arrieta has used acquisition as a vehicle to explore how technologies such as blockchain and artificial intelligence could help employees decide what work should remain in-house versus being outsourced, and how much they should pay for that work based on historical data.

The capability is called HHS Accelerate.

“Accelerate isn’t just about the blockchain,” Arrieta said. “It’s a cloud capability that ingests and curates and shares data. We’re running a series of microservices. We used this approach called human-centered design to actually build it, and we touched 3,000 members in the acquisition workforce.”

HHS is using a recurrent neural network to provide visibility of the prices paid and terms and conditions of HHS contracts. This recurrent neural network is a microservice of HHS Accelerate. It reads through terms and conditions and analyzes prices paid for contracts and clusters that information for acquisition professionals to use it as part of their contract negotiations to get the best deal for the government.

Is the data perfect, and is the insight perfect? Not yet, Arrieta said. “But it creates a discussion that’s very valuable and, we think, very interesting. We actually have used that to negotiate our first deal, and if everybody uses it, we think it’s going to save us $30 million over five years. It’ll pay for more than double the effort that we put into HHS Accelerate thus far.”

To understand how Arrieta is wired and what brought him to this point in his career, it’s important to know the origin of his passion for solving complex problems in new ways. His combined background of dabbling in software development and working as a contracting professional opened doors during his time at DHS. That’s where he cut his professional teeth learning about delivering enterprise, mission-critical, national security-level IT systems.

That led to an executive job at the Treasury Department working for the deputy secretary. Because of his technology background, he was placed on an emerging tech working group. Arrieta’s background in national security and experience using data to identify threats sparked his interest in exploring blockchain. Specifically, he was interested in how the technology could help more than a billion and a half people in the world who don’t have identities required to engage in formal banking.

“When I started learning about blockchain at the Treasury, … I started to see the impact that blockchain could have from a mission delivery perspective,” Arrieta said.

In other words, he wasn’t a part of the blockchain bandwagon that evolved with the rise of bitcoin. He saw a mission need and a tool that could potentially help to solve that need.

At HHS, the purpose of blockchain is to ensure data that the department is using to make contracting decisions is unchangeable. What Arrieta is looking for in blockchain is confidentiality, integrity and availability.

For Arrieta, his career has been a journey of different opportunities presenting themselves, and as a former college basketball player, he has learned how to become comfortable taking shots, missing shots and taking measured risks.

Arrieta credits his team’s successes with a culture of openness at HHS to take chances, as long as they are managed. Before starting at HHS, he wrote a farewell letter to his colleagues at GSA that sums up the importance of risk-taking, even if those efforts fall short.

“I started the email writing about all the things that we tried — and that didn’t work. The point to them was, thank you for experimenting and trying these different things. We didn’t spend a ton of money, but we did spend time. We spent time and energy trying different things. I literally highlighted all the things that I tried and that they partnered with me on that didn’t work. And then I said, ‘But we did have some things that did work.’ And we highlighted them. I’m a firm believer that things work because of what you learn in your failures.”

Why HCI Is Ideal for Cloud

Hindsight is 2020: A Year in Review and Moving Forward With WAEPA