In case you didn’t see the great news, our very own Steve Ressler was named by Government Technology magazine as one of the “Top 25 Doers, Dreamers & Drivers of 2010.” I’ve included the full article and list of honorees below. You’ll probably recognize many other GovLoop members like Peter Corbett, Bill Greeves, David Fletcher, Michelle Hovet, Shannon Tufts, and Chris Vein. Congratulations to all of the individuals who were recognized for their incredible contributions to improving government through innovation. (By the way, if you want to pat Steve on the back, Bill Bott has opened up a forum saying “Congrats to Steve!”) 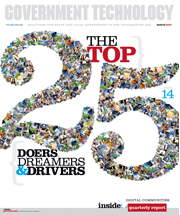 Mar 1, 2010, By The Staff of Government Technology

Since 2002, we’ve dedicated the March issue of Government Technology to 25 people who cut through the public sector’s infamous barriers to innovation — tight budgets, organizational inertia, politics as usual, etc. — to reshape government operations for the better. This year, we honor an eclectic group of individuals from government, academia and the private sector who share a willingness to challenge convention and find new answers to long-standing issues. Congratulations to our 2010 Doers, Dreamers and Drivers.

Extremely cool, congrats to all…

Congrats to all the GovLoop rockstars…and the community who makes GovLoop what it is..

give yourself a tee shirt, dude!!! No seriously congratulations.

This is a GREAT list of world-class best doers. And it has our founder and master communicator Steve Ressler which makes it even better.

Way to break through barriers and charge forward! Great job all!

A round of applause to all!