This Q&A is part of GovLoop’s “CIO Conversations” series. Twice a month, we’ll feature conversational interviews with current and former federal, state and local chief information officers to get to know the people behind the titles. You’ll learn about the perks and challenges of their job, how they ended up in their current position, what’s top of mind for them, how they’ve rebounded from setbacks and more.

Minnesota scored several major technology victories as 2018 wound down. The state government unveiled a new website, and it also debuted a five-year strategic plan for protecting Minnesota’s cybersecurity. Both achievements were big ones for Minnesota’s citizens and public servants.

GovLoop spoke with Minnesota Commissioner and State CIO Johanna Clyborne about what made these successes possible. Speaking with us during a National Association of State Chief Information Officers (NASCIO) event in October 2018, Clyborne explained how Minnesota entered the next phase of its IT modernization journey.

Clyborne said that Minnesota’s workforce is critical to completing its cybersecurity and modernization goals. She also detailed what leadership and training ideas sparked Minnesota’s momentum heading into 2019.

GOVLOOP: What are your top priorities heading into 2019? 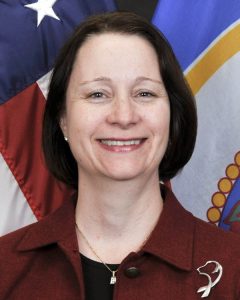 CLYBORNE: Our No. 1 priority is cybersecurity, but I suspect that’s true for most states. Particularly, Minnesota has had a rough three years trying to get funding established.

But at the end of the day, no one cares that the resources aren’t there, they just care whether their data and information are safe. And there’s no amount of money that can replace the public trust and confidence – if breached – when the government doesn’t do something that it should do, right? That’s going to be one of the bigger challenges.

We also have a five-year strategic plan that we have rolled out. We’re hoping that both sides of this coming legislative session will understand how critical it is that we act on it now.

GOVLOOP: Are you able to roll out this strategic plan to all your agencies relatively easily? How does that work?

CLYBORNE: I wouldn’t say that it’s relatively easy, but yes. We control the network that all the agencies are part of, plus we work with each of them to ensure that they have the appropriate certifications and standards that they need for their information.

I think the bigger challenge – our second priority – appears when you look at optimization. How do we do better with what we have? Where do we modernize? How do we scale appropriately to ensure that we’re much more effective in providing Minnesota’s information technology services?

GOVLOOP: What does IT modernization mean for Minnesota? It’s a term that can mean so many different things.

CLYBORNE: We need a plan to understand how we’re going to get what we have right now with our legacy applications to a more sustainable process. For example, we had technology that was so old that by the time when it came to do something about it, it became a far greater challenge than if we had kept up with technology all along.

We also need to do better about strategically planning our resources and where we need to be looking at upgrading. And how do we stop operating in technology that’s three, five or ten years old when we’re trying to add to it. That doesn’t create efficiencies – it’s the opposite of that.

GOVLOOP: How do you make sure that your employees are staying trained on all these new technologies and cybersecurity procedures?

CLYBORNE: I think training is incredibly important. It’s not just for hard, technical skills but in personal development. There’s also management and leadership – management’s not the same as leadership. I don’t know that we’ve always had a focus on that. I’m working with various individuals throughout my organization to find ways to provide training opportunities.

Unfortunately, budgets are an issue. But there are lots of creative things you can do. One of the ideas that I’m looking at is creating centers of excellence in various disciplines. I’m looking at leveraging the training experts that we have in-house. I’m looking at partnerships with the public sector to bring in individuals for monthly training and professional development. And I’m looking at how we change the structure that we began with to understanding how we invest in our people.

At the end of the day, technology is technology, but it’s not going to go if we don’t invest in the people we need to make the technology go and run effective state government.

GOVLOOP: How big is Minnesota’s IT workforce?

CLYBORNE: I have approximately 2,400 people. We’re spread across 70 agencies, boards and commissions. We provide services over 300 counties and local governments, plus the university systems as well.

GOVLOOP: Are there any exciting pilot programs that you’re working on or innovative ideas you’re thinking about?

CLYBORNE: One of the things that I’m proud of is reeling out the mn.gov website, which basically changed the way that our customers, our citizens, are able to interact with their state government.

It’s about accessibility. It’s being able to intuitively find what you’re looking for; to shop from home for that fishing license; to find out what the Minnesota Department of Motor Vehicles’ hours are; to understanding where your local officials are. All that’s now consolidated in one place that allows people to drill down to where they need to go, type in a keyword and be able to pull up their government at their fingertips.

GOVLOOP: How did Minnesota’s government come up with its perspective on what its citizens want? How did you think about it? Did you use human-centered design?

CLYBORNE: It’s all the above – feedback from actual people using our technologists; our business partners; and then, demoing in and asking, ‘Does this work? What should this feel like? What should it look like?’

For example – hypothetically, if you knew nothing about our state, and you were brand new, and you needed to find childcare, how would you do that? That’s what drove that process.

Our comms team carried the bulk of this. People like to think that it’s the hardcore programmers sometimes, but our comms team took this and said, ‘You know, we think we can do far better here.’ And they ran with it.

It’s about empowerment. It’s amazing what people will do. They’ll surprise you every time.

One County’s Response to the Longest Shutdown in History

The Unexpected Consequences of the Shutdown