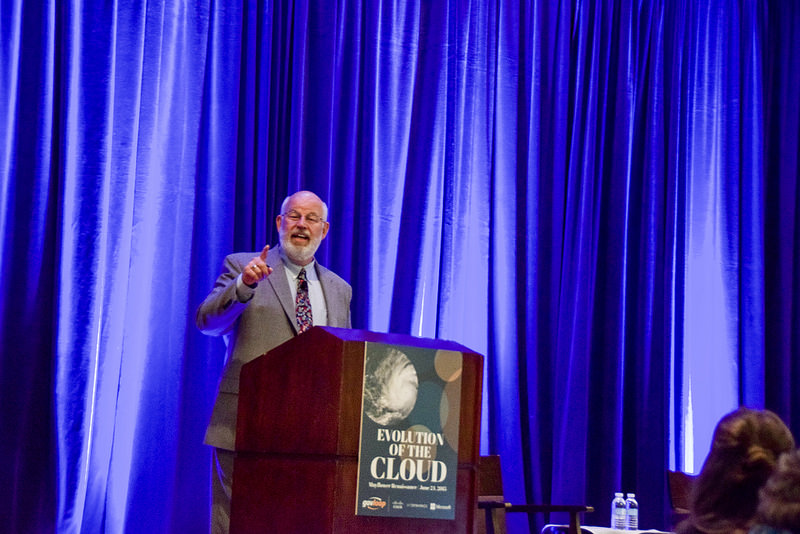 Unless you’ve been pulling a Rip van Winkle in the woods for the past 20 years, you’ve probably heard of cloud computing by now. Many private sector companies have successfully integrated cloud services into their infrastructure; now government organizations are beginning to follow suit.

At Govloop’s Evolution of the Cloud event, Deputy CIO of the FCC John Skudlarek discussed how his organization is leading the way in the public sector adoption of cloud computing.

Growing up, Skudlarek didn’t have much of an interest in computers; however, his brother worked at Princeton’s computer center. Seeing the massive IBM 360/91 computer with all of its tape drives whirring through racks of equipment fascinated him. Connected by large physical terminals, this massive computer had to be stored under the school’s parking lot.

Technology has changed a lot since then. But according to Skudlarek, cloud computing as a phenomenon has been around for almost as long as computers themselves have.

“While it may seem revolutionary if I was Rip van Winkle…you can follow how these things have naturally progressed,” he said. Virtual machines, VPNs and other advances in digital technologies have allowed for more distributed computing. “At the end of the day…the commercial market and things like Google Docs have helped to drive the idea of cloud computing into people’s minds without them even knowing it,” he said.

At the FCC, cloud computing is helping the agency become more flexible, simultaneously modernizing applications and public services and reducing the cost of producing them. By integrating software, platform and infrastructure services with cloud technology, Skudlarek said, “We can do things faster, cheaper and better.”

To push their agency up to the next level with the cloud, the FCC’s CIO, Dr. David Bray, hired “new folks with new ideas” to reform the culture of the organization. Today, the agency is being recognized for its leadership in cloud computing.

The FCC is now implementing Microsoft Office 365, a cloud Software as a Service solution, to reduce its in-house computing footprint.   The FCC has also implemented Platform as a Service cloud technology to improve its consumer help center with an updated complaint-filing system.

Over the next year, the FCC plans to re-write even more applications, starting with Licensing. Currently, they have over 22 different licensing systems; Skudlarek plans to significantly reduce that number using cloud computing.

According to Skudlarek, innovation leadership has shifted. The government used to drive technological advancement in the marketplace. The public sector would develop new technology and vendors would build it to match the newly set standards. Today, the paradigm has flipped. The private sector now leads technological innovation, and the government adopts commercial products to a progressively greater extent. This is especially true for cloud adoption.

“There is an imperative to change,” Skudlarek said. Money is drying up and there is an accelerating “continuum” of technological innovation. According to Skudlarek, everyone should ask him or herself, “Where am I on that continuum?”

Government agencies cannot afford to “hunker down” and hope things will get better on their own. With a new organizational culture and approach to the cloud, he contended that the FCC is “leaning forward” on that continuum, and he hopes to partner with other public sector organization to help them do the same.

“The evolution of cloud computing builds on our past,” Skudlarek said. By capitalizing on the advantages cloud computing offers government agencies, he hopes to build a better future for the public sector.