The President’s Management Agenda (PMA), which established the framework for IT modernization two years ago, leans heavily on innovation. And although agencies have made progress in modernization on several fronts, adoption of innovative technologies hasn’t been seamless. 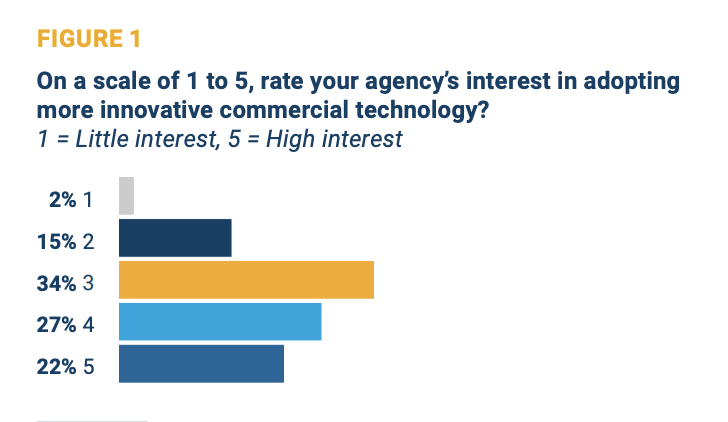 Respondents in a recent GovLoop survey showed a strong interest in adopting innovative commercial technology. On a scale of 1 to 5, with 5 indicating the highest interest, about 83% of respondents rate their interest between 3 and 5, and about half at the highest levels of 4 and 5.

Respondents were generally split on how their use of those technologies compared with that of the private sector, with 21% saying they have closed the gap with industry, 28% saying the gap has remained steady and 27% saying they’ve fallen farther behind.

Some familiar hurdles stand in the way of getting to the next level of innovation. Budget constraints, cited by 69% of the respondents, top the list of barriers, followed by concerns about security and privacy at 47%, and cumbersome procurement processes and a lack of in-house expertise, each named by 46% of respondents. 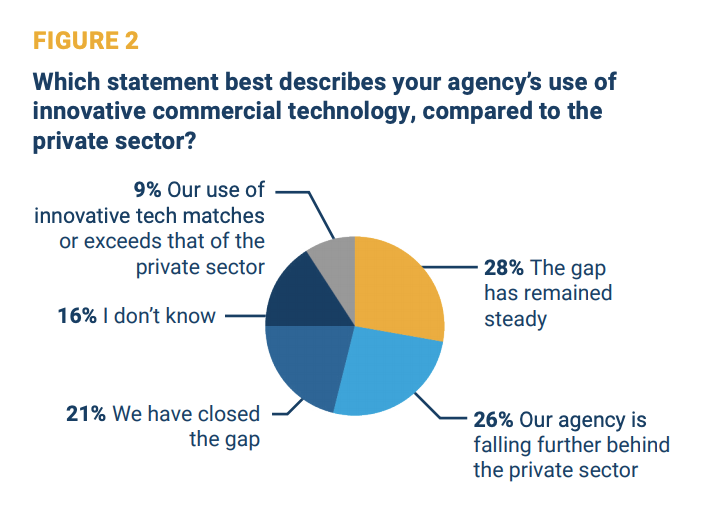 That’s where partnerships with the private sector can help. The National Institute of Standards and Technology (NIST) – which launched an Unleashing American Innovation initiative in support of the PMA’s lab-to-market Cross-Agency Priority goals – supports five strategies. They include increasing engagement with the private sector, building a more entrepreneurial research and development workforce, supporting innovative tools and services for technology transfer, and improving understanding of global science and technology trends.

Working with established companies, startups and alliances allows agencies to uncover promising applications or other technologies that are worth investing in, whether through innovation hubs such as the Army Applications Laboratory, prize challenges such as those the Defense Advanced Research Projects Agency or Challenge.gov run, or alliances such as NIST’s Technology Partnerships Office.

Collaborative relationships with the private sector also can help speed the deployment of new solutions, including some that are almost ready for prime time in government. 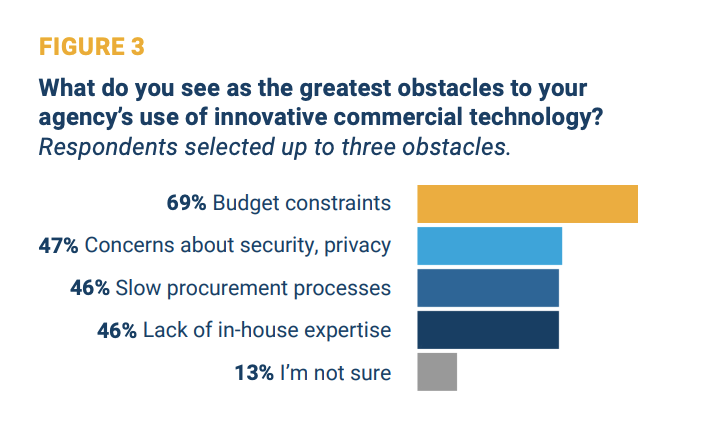 Government should partner with commercial entities that already have 80% of a solution built, then customize it from there, said Brian Paget, Chief Strategy Officer at SAP NS2. “You should not be building apps from scratch,” he added.

Developing partnerships has a ripple effect, allowing agencies to take advantage of relationships being developed within industry. SAP NS2, for instance, recently launched NS2 Labs specifically to work with smaller companies that have innovative technology but lack the mission knowledge to optimize it for government customers, Paget said. With input from agencies, a company that already has extensive experience working with government can look to tailor innovative technologies for agencies’ needs.

Additionally, government agencies that want to close the gap between their use of technology and industry’s use of it need to align themselves with those third-party organizations.

This article is an excerpt from GovLoop’s recent research brief, “Accelerating the Adoption of Commercial Innovation in Government.” Download the full report here.