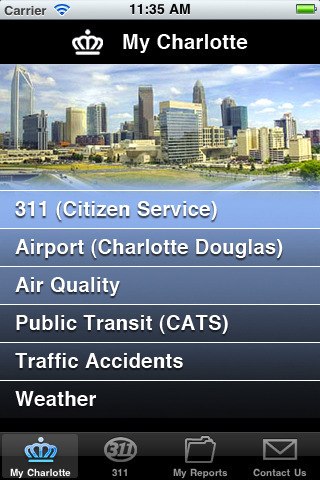 Lots of cities are transforming their websites into mobile-ready versions or going with an app that makes it easier for citizens to get key information faster. I learned about Charlotte, North Carolina’s myCharlotte Mobile App a few weeks ago and wanted to learn more about it. So I reached out to GovLooper Shawn Proffitt to get the scoop.

1 – Tell me about the myCharlotte mobile app project. What is the concept behind it? What does it entail?

The My Charlotte mobile application provides a comprehensive citizen service platform for the City of Charlotte residents to report graffiti, potholes, neighborhood nuisances to the CharMeck 311 Contact Center, ride public transit, get airport information, and other services. Allowing citizens to take a picture, use GPS for location awareness, GoogleMaps, and submit anonymously, My Charlotte is a single application for citizen service and engagement. Key to this solution is the ability to operate across multiple communication platforms such as voice, email, web, text, and mobile while possessing the ability to include a customer relationship management (CRM) tool and Avatar capabilities that can provide a better citizen experience. Available for free on the iPhone, the service is expanding in March 2011 to include DROID, Blackberry, and device independence in English and Spanish. The technology platform for My Charlotte is a GetABBY hosted-solution that services multiple communication platforms and possesses the ability to identify the end-user across the platforms through neuro-network and artificial intelligence capabilities. Released on the iPhone platform only on October 19, 2010, to date 1400 downloads have occurred with 150 citizen report submissions.

2 – When was it officially launched? October 2010 via the iPhone Can you share some of your statistics of its success (# of downloads or qualitative/stories of how being used)? Downloads exceed 5,000 on all four platforms available. Generally, I know that many have used it to report potholes and broken water mains. I also know that using the RideCATS app. has been very useful for finding closest train station/times. RideCATS, a separate app, also has about 5,000 downloads so far.

3 – Our readers always love the specifics of what it took to accomplish key projects. Can you describe what technology you used to build it? Also the resources used to make the project happen?

Throughout the organization, multiple departments were seeking to address citizen service through mobile technologies. Applications for ride public transit such as iCatch and reporting graffiti were in the forefront. However, significant concerns for the City of Charlotte in deploying mobile solutions were reducing citizen confusion about how to interact with the City and promoting a more comprehensive seamless approach to mobile application deployment and costs. Keeping this concern in mind, the City of Charlotte sought to leverage its investment in CharMeck 311 and integrate mobile technologies into existing communication channels of voice, web, and email. Taking this course would allow CharMeck 311 to provide better support to the citizens because expanding services to mobile would help to reduce the approximately 2.1 million annual calls CharMeck 311 receives and control the increasing cost of supporting the citizen.

Realizing the problem, the City of Charlotte selected the GetABBY solution. A multi-communication channel hosted solution capable of supporting voice, email, web, text, mobile, and social media platforms, GetABBY provides a customer relationship management (CRM) tool that aggregates citizen interactions and data across communication platforms providing a more comprehensive view of the citizens needs and location-based awareness through a dashboard and integration to the City’s service request systems. Capable of translating speech-to-text and text-to-speech, the platform is poised to help the City in the future answer citizen needs across more than 35 different languages using an Avatar and artificial intelligence to engage the citizen in communications similar to that of a human-to-human experience.

4 – What have been some of the results so far? The My Charlotte application is proving successful. Continuing to evolve with approximately 1,400 downloads on the iPhone since its implementation in mid-October, the next phase deploys the application to DROID, Blackberry, device independence, and includes Spanish. This will expand the service to a larger citizen base and continue to reduce the $4.91 per call cost at CharMeck 311 to pennies to process a citizen request on the frontend. In addition, the new applications such as public transit will help to promote more use of this application, along with improvements in traffic accidents, air quality, and new applications slated in the future. Yet to actively market My Charlotte, the City of Charlotte believes that the mobile application is already a success and through marketing and application enhancements will increase its usage over the coming year.

5 – What has surprised you the most by the reaction? That a city would take this on, and how quickly the first version was up and running. Also, and maybe this shouldn’t be surprising was how quickly it was embraced by those who have seen it, even though it is very much in its infancy. What parts of the project are most popular with citizens? The Citizen Service component and the RideCATS app. available as both a stand-alone, and available from My Charlotte’s app. Items less popular than you thought? Weather and air quality. It should be noted that these are essentially ‘placeholders’ for future projects that will likely take their place.

6 – What’s your advice to a senior leader who is thinking about launching a similar mobile initiative in their agency? Look at what you are trying to accomplish first, and start with the backend – both the data and processing. Do not start with the front end (i.e. branding and design). Also, be prepared for its popularity for the first launch; everyone will rush in to engage their own application – which is great on the one hand, but can quickly get out of control if there’s not a master plan (again, make sure the business case for what you are trying to accomplish is sound, scalable and sustainable). Why should you do it? It can reduce costs to support citizens substantially. How do you get buy-in with program offices? Develop the business case for either cost reduction or avoidance, and let those numbers sell themselves. What are the best practices/ Potential problems to avoid? Avoid having multiple applications that service a single city.