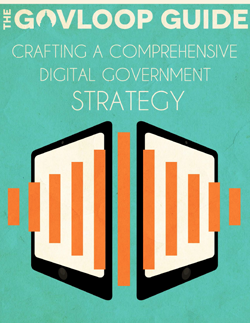 Throughout the ages, technology has played an essential role for government to craft a better society for citizens. In the Roman Empire, the aqueducts revolutionized services provided to Roman citizens. Leveraging gravity alone, the Romans were able to transform communities, providing water to distant cities and towns, and create an engineering marvel that would lead to years of economic dominance and influence society for years to come.

Today, governments are leveraging much more than just gravity. With the same ingenuity once used by the Romans, governments are implementing dozens of emerging technologies to innovate and work towards solving large-scale problems. With public sector resources dwindling and demand increasing from citizens, government has little choice but to innovate and reform service delivery. Through qualitative and quantitative analysis, this report will provide a snapshot of what a digital government truly is and the path agencies can take to craft a comprehensive digital strategy.

In an era driven by technology adoption in consumer markets, government has been attempting to leverage new kinds of technology. GovLoop’s research defines a digital government as “the tools, applications, resources and methodologies allowing government to lever- age new and emerging technology to serve the most mission-centric goals of the agency.” Additionally, a digital government is one that builds a foundation that is device-agnostic, information- and customer-focused, and highly scalable to meet increasing resource demands.

This report draws upon a survey of 94 members of the GovLoop community who are currently adopting emerging technology at the state, local and federal level of government. This report also includes insights based on interviews with government leaders and experts from our industry partners, including:

Undoubtedly, government is challenged to quickly modernize and turn once rigid institutions into agile, lean and efficient organizations. While many agencies have plans for technology upgrades, GovLoop’s research reveals that agencies rarely focus on developing a proactive, integrated, and comprehensive digital strategy. Technology adoption to craft a digital government is not just a phenomenon occurring at the federal level. In addition to the federal government, public sector agencies at the state, local, and global level have recognized the need for service transformation through a digital government strategy. Digital has become a necessity for organizations to improve service delivery and outcomes for citizens.

Now is the time for public sector innovation and capitalizing on emerging technology. By taking a strategic approach to innovation and technology, agencies can begin to craft a 21st century government.