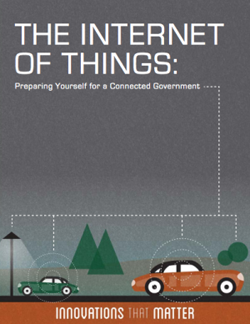 It’s easy to find ways in which IoT has affected private and consumer-facing enterprises — you probably have heard of the Nest thermostat or fitness devices that can monitor your movements, location, and workouts throughout the day.

But the effect of the Internet of Things on the public sector and government is less concrete. What’s clear, though, is that although government may not yet be taking advantage of the technology and applications that IoT can offer, it’s coming hard and fast toward the public sector — and it’s time for government workers to get ready.

That’s why GovLoop has put together our guide, The Internet of Things: Preparing Yourself for a Connected Government. More even than the consumer-facing sector, government is set to be completely transformed by this new, futuristic technology.

But most government workers don’t even know what IoT means.

In a GovLoop survey of 800 public-sector and industry employees, 49 percent said they had never heard of IoT, while 16 percent said that they “had heard of it and were not sure what it means, but want to learn more.” About a third — 35 percent — said they were aware of the phrase and knew its meaning, but only 9 percent of survey respondents said that their agency or organization was currently exploring or using IoT.

“If the Internet of Things has to do with home automation or automation of the car, controlling devices like security systems through the Internet and wireless networks — things affecting things, what does this even have to do with any of the service-provided departments of government?” asked one survey respondent.

Quite a lot, actually. So let’s get started.

This guide will give you:

IoT is going to change life, and government, as we know it. You’ll want to be ready.
Start by getting our new guide here.

Thanks to our sponsors for their support of this guide.