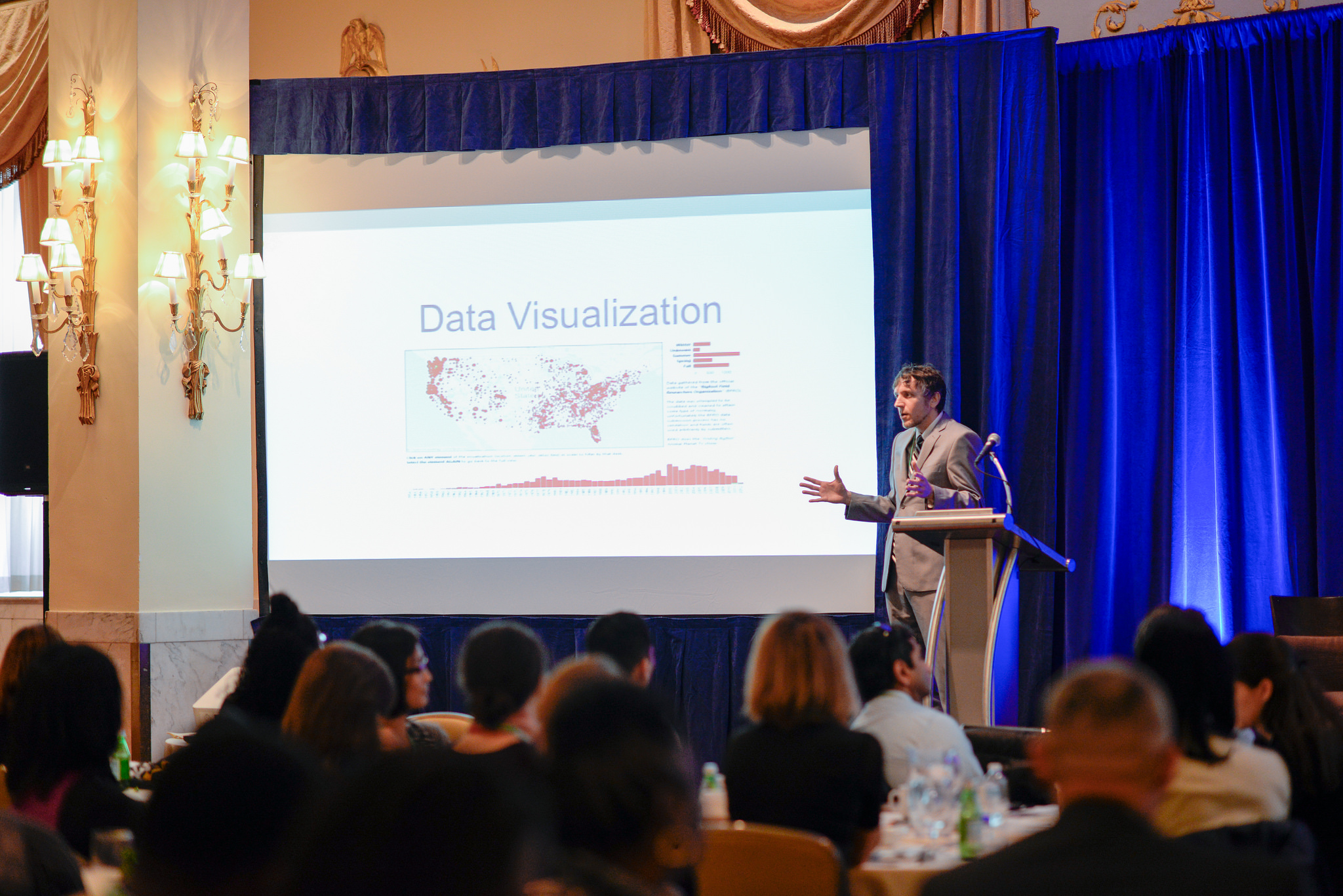 At our recent training, we asked what the future of data analytics looks like. Kurt Heisler, PhD, MPH, MS, Senior Policy Advisory, Technology and Innovation, Office of the Commissioner, Administration on Children, Youth and Families, Department of Health and Human Services (HHS) gave us two answers.

What we want to talk about

Heisler started with what he likes to discuss: the promises and aspirations data analytics holds for the public sector. He highlighted five data innovations that he hopes to see take hold in government:

1. Data Visualization. “We will no longer be trying to find insight in tables and spreadsheets,” he said. “The future of analytics is to make use of visualization.”

But beyond thinking of colorful graphs and a few clickable data filters, Heisler envisions a future where data visualization is truly immersive. “Imagine walking through an environment where you can actually feel the peaks of your graph with your fingertips.” That sort of immersive experience would allow people to truly interact with data and understand it in new ways.

2. Data Mining. “This is essentially an automatic process of going into your data without a preconceived notion of what you’ll find, to extract patterns and unknown answers that you didn’t anticipate,” explained Heisler. While data mining is being utilized to great effect in the private sector, many government organizations continued to use data to confirm or deny preconceived hypotheses. Yet as the amount of data government creates and owns continues to grow, Heisler said data mining will be necessary to move the public sector forward in the field of data analytics. It also holds great potential. “With data mining, we’ll discover patterns in data that we might never have seen otherwise, because we’ll abandon all pre-conceived notions of what we’ll find,” Heisler said.

3. Predictive Analytics. Heisler admitted that when people think of predictive analytics, they think of scary scenarios like what is outlined in the film Minority Report. However, he also encouraged us to think of the beneficial applications of predictive analytics like assessing the probability of a child being exposed to abuse or neglect before it happens. At Heisler’s agency, they are already using this advanced form of data analysis to great effect. He said the challenge will be to continually balance those benefits with ongoing concerns of privacy and abuse.

4. Machine Learning. Self-driving cars and phones that talk directly to their own are already using machine learning, which Heisler described as “the science of getting computers to act without being explicitly programmed to do so.” In the future, Heisler imagines adapting this technology to perform and improve the daily operations of government, just as it has in the private sector.

5. Artificial Intelligence: “This is, of course, the dream of a machine capable of intelligent behavior,” said Heisler. “But is it science fiction or fact?” While concerns and doubts abound regarding this use of data analytics, Heisler said not to discount AI as a possibility.

What we need to talk about
But in order to achieve these awesome data innovations, Heisler said government has some work to do. While we currently use data analytics for many descriptive tasks, these advanced applications require more fluid infrastructures and processes. According to Heisler, we have to make it easier to:

Ultimately, Heisler sees a bright future for data analytics in government. However, we can only achieve these next-level applications if we first have the tough conversations regarding current, static public sector operations.

Kurt makes some great points, mirroring what we are hearing from our customers. I would also add that it’s important to identify specific goals and objectives for data analytics initiatives and implementing a focused strategy to achieve those objectives. Sounds basic, but it’s surprising the number of projects that flounder because they are not built with purpose. There’s a great eBook that can help you define your strategy: Driving Decision-Making, Security & Insight with Big Data (http://www.vion.com/assets/site_18/files/vion%20collateral/ebook.driving%20decision-making,%20security.pdf)