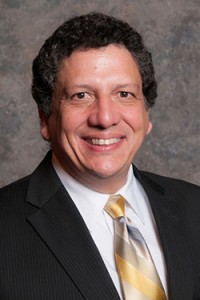 Drugs and illegal firearms. These are usually the first things to pop in your head when you think of the black market. But what is another, less easily documented crime? Human trafficking. Yes, slavery still exists today. And human trafficking is currently one of the fastest growing black market activities, with unreported cases numbering in the thousands.

The lack of accurately documented crimes is one of the greatest challenges to combating human trafficking. So how do we fight this growing dilemma?

Meet Robert Canino, regional attorney in the Dallas District Office of the Equal Employment Opportunity Commission (EEOC) and pioneer in the anti-human trafficking field. His work has led to his nomination as a Career Medal Finalist for the 2014 Samuel J. Heyman Service to America Medals (SAMMIES), also known as the “Oscars” for federal employees.

Chris Dorobek of the DorobekINSIDER program spoke with Canino about his SAMMIES nomination and his use of civil rights laws to try human trafficking cases.

With almost three decades of litigation work with the Equal Employment Opportunity Commission under his belt, Canino has been an avid supporter of equality and justice in the government workplace, always fighting for the underdog. He has used civil rights litigation in order to better workplace conditions and to acquire millions of dollars in damages for victims of discrimination.

Historically, although human trafficking has been considered a criminal problem, law enforcement has been negligent in actively pursuing these cases. Around 2000, Canino discovered ways to bring human trafficking into the EEOC realm and has impacted thousands of lives by swaying courts to view the problem in terms of the civil employment law regarding national origin, race, or disability.

Canino addressed the most common perception of human trafficking “When most of us think of human trafficking, and certainly back [in 2000], what came to mind were these scenarios by which usually women or children were transported and confined, exploited,” he said. “They were prostitution rings, oftentimes they were people of foreign or national origin involved. And those people were basically subjected to what is also called modern day slavery.”

This view has led to the creation of laws from a criminal standpoint intended to protect people from becoming victims of these types of trafficking crimes. Canino explained that as time has passed, the civil remedies have also increased.

The EEOC’s Connection with Human Trafficking

According to Canino, the Equal Employment Opportunity Commission’s mission overlaps with anti-trafficking efforts. “The EEOC’s jurisdiction is actually with regard to the statutes that prohibit discrimination in the workplace. And because of the fact that we were able to identify that these trafficking cases often overlap with some of the same issues that we look at when we’re looking at discrimination cases, we then decided to see what we could do to wrap the statutes that we enforce around those problems.”

“The things that you would see would be that persons were being made to work typically without pay, or very little pay, certainly not enough to live on,” explained Canino. “They were put into their situation through coercion or fraud. There’s always deprivation of freedom, there’s denial of safety and medical care, and there typically is abuse involved.”

Some may find it to be a bit of a stretch connecting the EEOC and one of the largest black market criminal activities. Canino explained that as the EEOC moved into the human trafficking field, it learned that more federal, state and nonprofit resources were needed. He described that he and the agency had to look at each case individually to see where the EEOC could enter into this pushing back of human trafficking.

“For instance, you have overlap where the laws that EEOC enforces prohibit discrimination based on things like race, national origin, gender, pregnancy, sexual harassment, age, religion and disabilities,” said Canino. “So we see that with these trafficking cases, you oftentimes have foreign workers who are the victims. Well, we have a national origin discrimination and race discrimination that may overlap with that. In, a lot of these cases, you have sexual assaults or sexual crimes, and we look at our laws and we say, ‘Well, we have civil laws against sexual harassment.’”

Canino stressed the challenge of measuring whether or not the agency’s efforts are combating human trafficking. It’s vital to bring together the varying skills of people from multiple backgrounds. “We have some taskforces that have been set up with federal authorities, state authorities, the nonprofits, the non-governmentals, and we meet together periodically, maybe once a month or once every two months,” he said. “We share information, we talk about the things that we’re seeing at the very ground level, what have we heard, phone calls that come in, cases we hear about, questions that we want to ask each other because I may not be an expert about everything that the various laws can be involved in any one of these cases.

By working with various agencies such as the FBI, the U.S. Department of State, the U.S. Department of Justice, different embassies, and nonprofit groups, Canino has developed deeper relationships and fostered greater communication to help trafficked victims. Some organizations have stronger connections with victims and a greater level of trust, and these factors foster success in helping more people.

Due to the underground nature of the human trafficking dilemma, many citizens my not view this issue as a top priority policy issue. From his experience, Canino begs to differ.

“I’ve been in the EEOC for 27 years, and there’s nothing that’s more disturbing, and unsettling about where we are as a society than these kinds of cases when you see them up close and personal,” Canino said. “In both of the cases I handled, one had 52 victims, one had 32, and in some cases they can get into the hundreds. We have one right now that’s five or six hundred. But, but I’ve gotten to know these people personally, and to, to hear the heart wrenching stories. Anybody I talk to sees it and says, ‘Wow, that really goes on in this country? Is that a real story that you’re telling about what happens in America?’ And I think that makes it easy to motivate any of us that come across this kind of scenario.”

For more about Robert Canino’s nomination, click here, and for more of our coverage of the SAMMIES, click here.