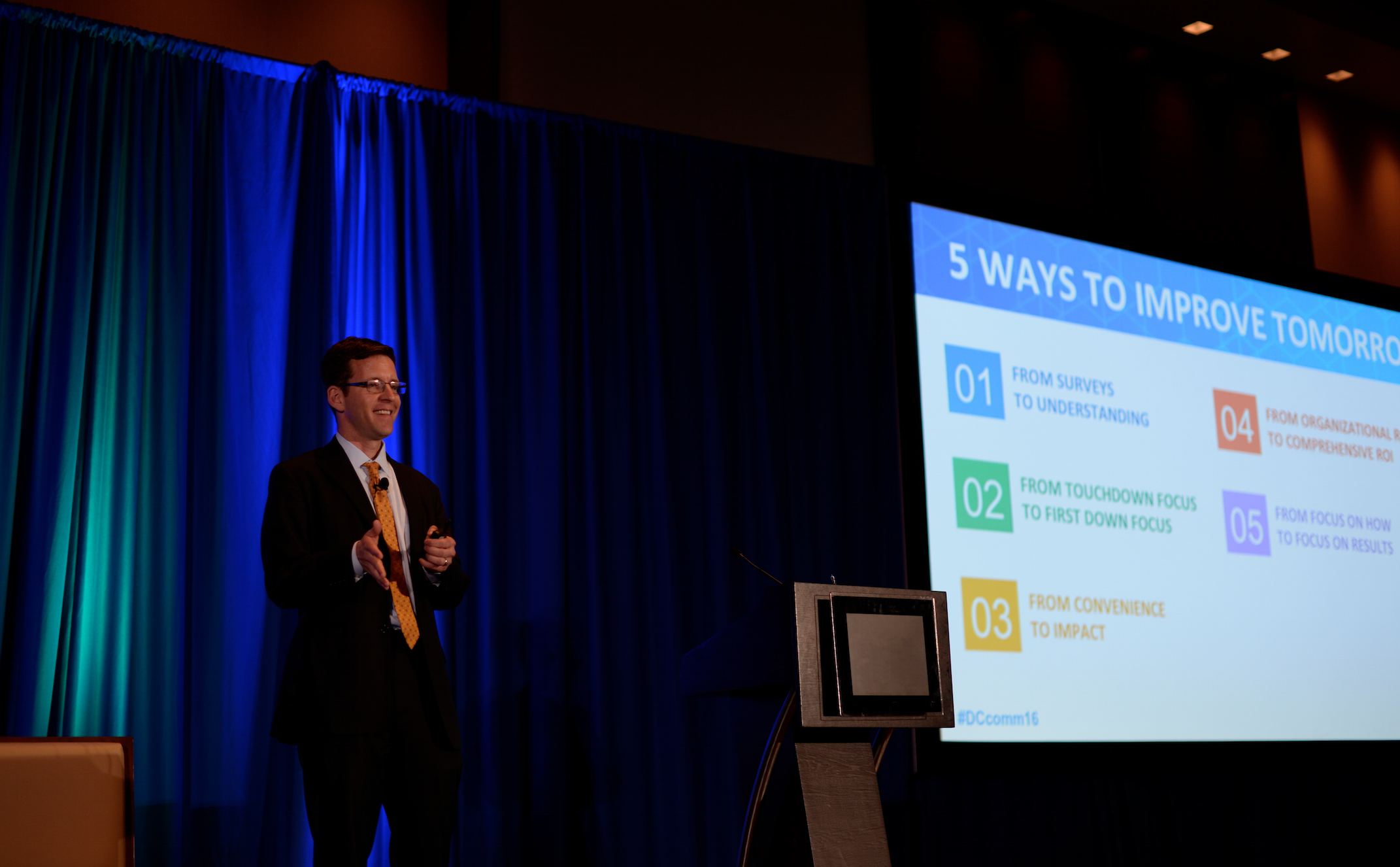 At today’s GovDelivery’s 9th Annual Digital Communications Summit, we heard a ton of great, distinct tactics to help agencies improve the way they speak to the citizens they serve. But at the conclusion of the summit, Scott Burns, CEO and Co-Founder of GovDelivery, reminded us that even as we pursue these strategies, we can’t lose sight of the ultimate goal of government communications: improving citizen lives.

“Of course, you have to have the right components to drive your success – people, audience, solutions, data, outcomes, and security,” he said. However, those capabilities must be leveraged to holistically and strategically achieve the overarching agency mission.

1. From surveys to understanding

“Well before the internet, government has used a lot of surveys,” said Burns. “But now we have a real opportunity to move from the emerging activity of surveys to a deeper understanding of the citizens we serve.”

To gain that understanding, he encouraged agency workers to “marry your survey data with operational data and the facts on the ground.”  Test ideas and assumptions in the field, in order to gain real insights into what your citizens prefer and need.

Burns offered an example of this idea in action: When the Departments of Veterans Affairs started an email campaign, they decided to use A/B testing to learn which messaging actually resonated with their audience, rather than relying on boardroom assumptions. They tested veteran-oriented appeals versus benefit oriented appeals and found that the latter approach increased their click rates by 47 percent. That success couldn’t have been achieved by simply asking beneficiaries what they want to hear from the VA.

2. From touchdown focus to first down focus

The VA’s focus on incremental improvement is what Burns calls a “first down focus”. While organizations should diligently pursue their ultimate objectives, truly successful agencies will realize those objectives can only be achieved through strategically aligned, incremental tasks.

“For emerging organizations, narrowly defined actions are the end result, whereas experts in the field understand how incremental actions matter toward the end goal,” he said.

To keep your daily tasks aligned with your long-term goals, Burns recommended mapping the journey you expect your stakeholder to follow. The Federal Highway Administration did just that when they previously organized a summit. Rather than focusing on the end goal of filling the room with participants, Burns credited the agency with taking the journey to the conference with potential attendees.

“That shows us that you aren’t just going to fill the room or create the type of experience you want by focusing on that goal along. Instead, you need to understand the experience and the people you need to reach. Communicate with people along the way. Engage them and then convert them at the end,” he said.

3. From convenience to impact

As agencies pursue these incremental improvements, Burns reminded us that impact should be a key consideration. “Convenience isn’t a bad thing but as we see our clients moving from the emerging phase to truly having an impact on the mission, they always move from the mindset of convenience to real impact,” he said.

He referenced healthcare.gov’s communication efforts as a successful example of this strategy in action. Rather than solely focusing on making the website user-friendly and easily navigable, communications were targeted to actually drive enrollments and get people to the healthcare they need.

4. From organizational ROI to comprehensive ROI

Again, he offered an example of this shift in perspective. During a snow emergency, Burns argued that cities should do everything they can to prevent citizens’ cars from being towed. At face value, this seems counterintuitive because each towed car brings revenue to the city. However, if you consider a towed car as part of a much larger chain of events within your city, the ROI becomes more clear. A person whose car is towed may be forced to miss work, defer childcare, or otherwise disrupt the flow of the city in an effort to reclaim their vehicle. In that scenario, the city could actually suffer more economic losses by towing the car than they would collect from the towing fine.

5. From focus on how to focus on results

Finally, Burns concluded by re-emphasizing the need to let your ultimate objectives guide every decision.”Today, you always hear people focusing on making the website better. You her buzzwords like ‘UX’ and ‘style guide’. But it’s very hard to organize a Disney service-level organization around just the minutiae of the day-to-day,” he said. Instead, organizations must continually frame their tasks in terms of the results they want to achieve, rather than the tasks themselves.

Not only is this steadfast focus critical to achieving government’s mission of improving lives, it’s also integral to building a citizen-focused internal culture. “You need to organize around your vision of driving outcomes. Especially if you want to engage the people throughout your organization, you have to get this one right,” Burns said.

Ultimately, “Improving lives is the end goal,” Burns concluded. “Everything else is just the means.”

To check out all that the GovDelivery Digital Communications Summit, “Transforming the Citizen Experience,” had to offer, head here.

How USDA Is Empowering Citizen Scientists with Open Data

How To Integrate Citizen-Focused Strategies at Your Agency