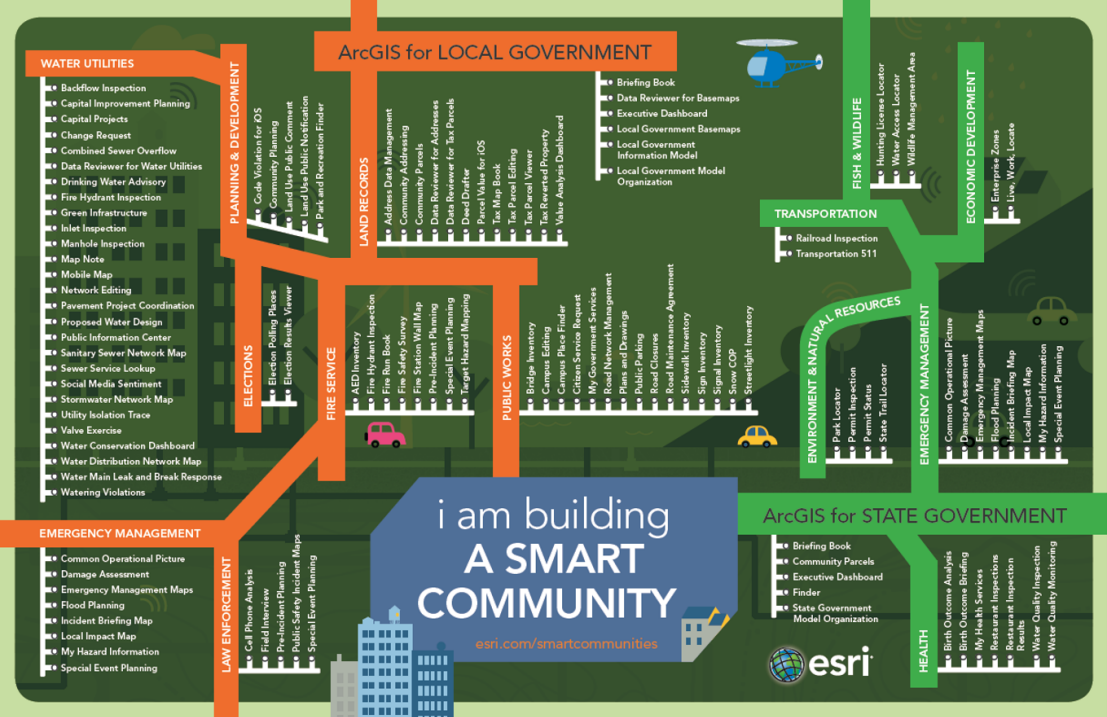 One of Esri’s greatest success stories is in King County, Washington. Workers were able to implement location platforms in over 42 agencies through custom GIS applications. Geospatial technology provided context and content to programs so that workers could anticipate situations before they became problems. Since 1992, GIS has enabled King County to quantify benefits and see a real return on investment. Between 1992 and 2010, the community saw net benefits of up to $1.7 billion.

Minneapolis is another city that has successfully developed and implemented ArcGIS applications. MapIT Minneapolis is a gateway for the public to interact with maps, focused applications, and other “geo-information” within the city’s limits. Citizens are able to explore already made maps and even create their own with open data provided by the city. Departments utilize these tools to inform policy decisions on everything from traffic lights to the environment. For example, a popular story map indicates the locations of dangerous dogs. Each animal on the map has had an animal-to-animal biting/incident or an animal-to-human biting/incident.

Rexburg, Idaho has created an overview of their city in a comprehensive story map to complement their growing economic status within the Intermountain Western region. The map features information on demographics, workforce developments, Brigham Young University-Idaho, and public land usage. A more specific story map in Salem, Oregon indicates the location of any active construction in the city. Each section shows the project information including a description, funding sources, estimated construction dates, and who can be contacted for more information.

Open Data Minneapolis is an example of a city that has fully embraced supplying their citizens with data on all fronts. Private citizens and businesses can access crucial information free of charge and with minimal licensing from any device. Graphs and maps on air quality, fire districts, hydrants, and animal control are available at anytime and updated regularly by city officials. The State of Maryland also uses a mapping and GIS portal called MD iMAP to provide open data to the public. Data categories include agriculture, public safety, transportation, hydrology, and business economy.

ArcGIS has different abilities depending on the size of the district. In the White House Utility District of Tennessee, every employee has access to seven separate dashboards that provide resources and information on daily tasks. There are over 200 web-based maps, apps and information layers utilized to improve capital investments and make more effective decisions. With this new geo-technology, customers within the district have saved roughly $32,000,000 while the government has saved over $100,000 in expenditures due to better allocation of resources.

Smart and responsive communities are possible with the help of ArcGIS applications. Communities across the country are developing geo-spatial technology that is easily configured with any device so that public workers are able to complete their tasks more effectively and efficiently. To learn more about how your community can become a smart one listen to the whole online training here.

Is Your Office Ready for the Post-COVID Crowds?

How Galileo Can Help You Discover a Career Outlet