Federal chief information officers (CIOs) may have thought that their days of anxiously awaiting final grades each semester ended when they graduated high school; but, since 2014, the Federal Information Technology Acquisition Reform Act (FITARA) has replicated that feeling with their biannual scorecard release. Sitting in front of the House Oversight Committee – instead of their parents at the dinner table – CIOs are asked to explain why they’re not up to par on seven different IT priorities.

“It’s not designed to burn a scarlet letter on an agency or CIO’s back,” Rep. Gerry Connolly (D-Va.), the House Oversight Subcommittee on Government Operations’ Chairman, reassured the witnesses during a June 26 hearing. “It’s designed to be a tool to incentivize change for the good.”

In the eighth update to the scorecard, the subcommittee and its witnesses discussed FITARA compliance, how well agencies are implementing IT legislation, the importance of direct reporting from an agency’s CIO to the agency head, and how data center consolidation could reduce costs.

Federal CIO Suzette Kent said that the FITARA scorecard is meant to give CIOs more influence to improve and streamline IT projects.

“[It] serves as a vehicle for how we communicate evolving priorities and a measure to demonstrate progress,” Kent said.

The National Science Foundation (NSF) became the first agency to earn an A for their cybersecurity preparedness. The cybersecurity scores, now tied to each agencies’ implementation of the Federal Information Security Modernization Act of 2014 (FISMA), were notoriously low in both the sixth and seventh scorecards.

Overall, agencies, averaged a C ranking with none scoring above a B+ or below a D-. 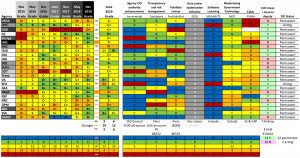 The letter grades are based on each agency’s compliance with seven different IT standards. They include: CIO authority enhancements, transparency and risk management, a portfolio review, data center optimization initiatives, software licensing, modernization of government technology, and cybersecurity. The plus or the minus grades are based on whether the agency’s CIO reports to a head or deputy within the organization.

Common concerns about the state of IT modernization throughout federal agencies included updating legacy systems, data center consolidation and the costliness of innovation.

“When you take a look at the spend of the $90 billion each year on IT, 80% of that spend is on legacy IT,” Carol Harris, Director of IT Management Issues at the Government Accountability Office (GAO), said. “We need to focus on decreasing that number and reinvesting that money into modernizing our aging systems.”

Harris also argued that the expense of modernization is worth the investment.

For some agencies, savings have been almost immediate. Education Department CIO Jason Gray said that his agency had reduced storage costs from $1.43 per gigabyte to just 12 cents for the same unit of information by consolidating data centers and adopting cloud.

Some of these improvements were driven by private-sector trends, such as improving customer experience (CX).

“We have used user-centered design and customer expectations to drive back into the way that we are looking at delivering services, both from a digital and mobile capability standpoint,” Kent said.

A user-centered approach to modernization is a multi-team effort, and the need to agencywide involvement doesn’t end there. Treasury Department CIO Eric Olson noted that modernizing IT systems requires hiring the right employees and documenting financial resources.

“IT doesn’t live in a vacuum. There are workforce issues, budget issues and procurement issues,” Olson said at the hearing. “All those folks need to be at the table.”

I’ve loved hearing new iterations of the FITARA scorecards as they’ve been released. CIO Olson noting that “IT doesn’t live in a vacuum” is spot on and these scorecards/grades have been helpful in showing just how much cross-functional teams need to work together toward bettering their standing.