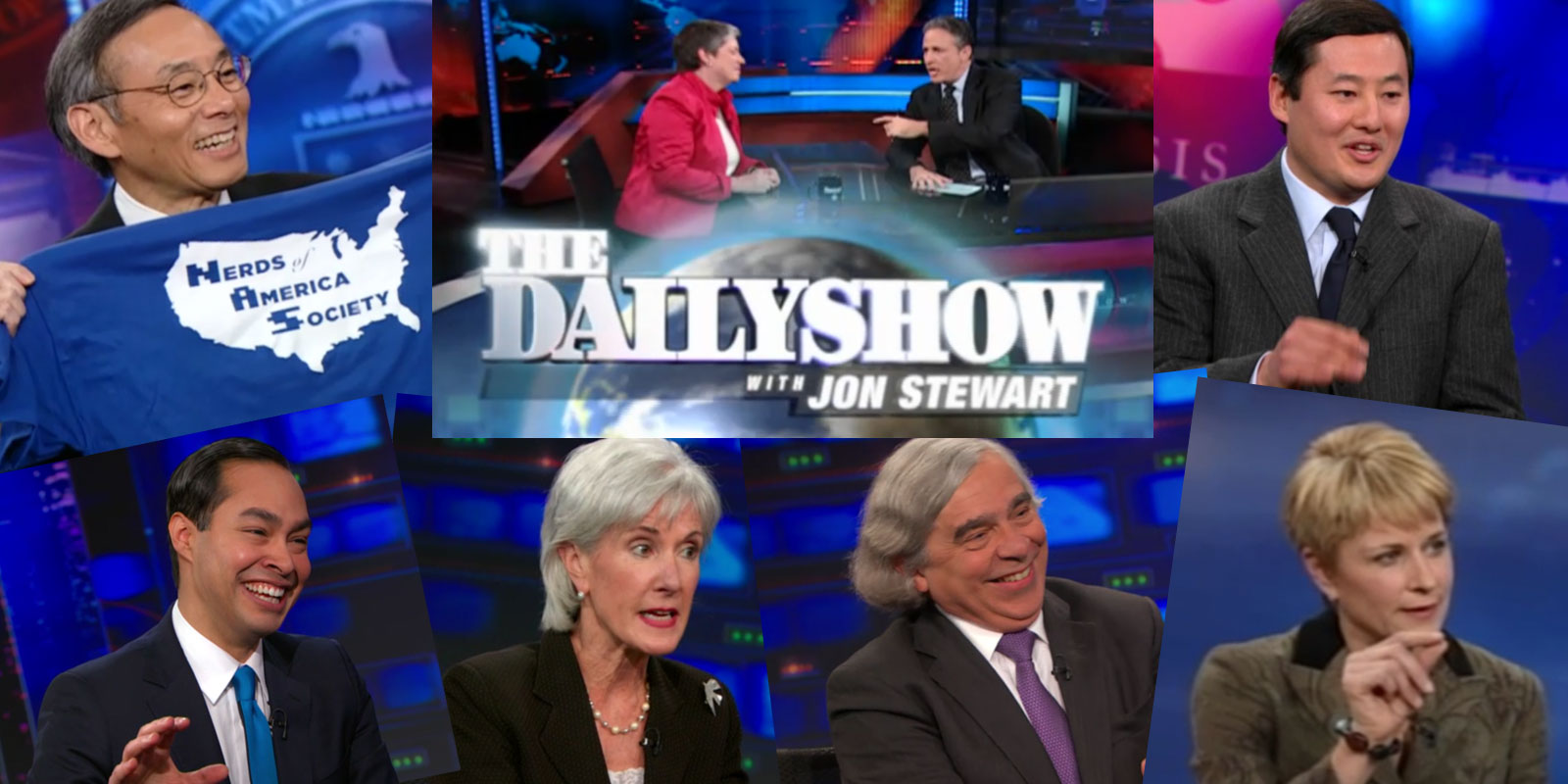 Lauded as the “last honest newsman” by some and decried as a tool of the Obama administration by others, whether you like him or not, Jon Stewart has long been one of the country’s most influential political comedians.

Over the last 16 years, Jon Stewart has welcomed many government agency big shots into the interview hot seat on The Daily Show. Though Jon Stewart is certainly a Democrat—and he clearly enjoys picking on Fox News in particular—he’s talked with government employees with diverse political ideologies.

Take a trip down govie memory lane with the best interviews of government employees from The Daily Show with Jon Stewart. Then, tune in to Comedy Central on August 6 for Jon Stewart’s final episode.

*Unfortunately we can’t embed material from the Daily Show site, so click on the links of each name to watch the videos.

In his 2009 appearance, Steven Chu, then Secretary of the Department of Energy, opened strong by making Stewart an honorary member of the Nerds of America Society. They then moved on to more serious matters like national environmental policy, with the Nobel Prize-winning physicist providing zingers in response to climate change skeptics. After the show, the Energy Department shared a behind-the-scenes video in which Chu appreciates The Daily Show‘s backstage hospitality, but is appalled by its energy-inefficient incandescent bulbs in the green room.

Julian Castro, the Secretary of the Department of Housing and Urban Development (HUD) took a turn on The Daily Show in early 2015. After explaining the new attitude at HUD, now nicknamed “the Department of Opportunity,” Castro talks about small but hopeful improvements at the the Federal Housing Administration. Castro’s attempts to convey the “very strong trajectory” of the capital reserve ratio is surprisingly hilarious.

Richard Clarke, former National Coordinator for Security, Infrastructure Protection, and Counter-terrorism for the U.S. gave a fascinating interview on The Daily Show in 2004. Clarke talked about his “much hullabaloo’d” book Against All Enemies: Inside America’s War on Terror, which was a hot topic of conversation for its criticism of the Bush administration’s approach to terrorism leading up to 9/11.

Robert Reich, Secretary of Labor under President Clinton, has appeared several times on The Daily Show, most recently and perhaps most memorably in 2013. During the segment Reich and Stuart talk about income inequality and the American Dream. Economics nerds can dig into the extended interview.

George Tenet was often the focus of pointed, hilarious news segments on The Daily Show when he was CIA Director. One of his statements in front of a Congressional hearing became a Moment of Zen, and Stewart and his correspondent comedy team practically rejoiced when Tenet resigned from government service in 2004 for “personal reasons.” When Tenet published his 2007 memoir, At the Center of the Storm, he boldly went on The Daily Show to talk about terrorism, security analysis versus policy, the war with Iraq,  WMDs, and Al-Qaeda—and seemed to have a good time.

When she was Secretary of Homeland Security in 2009, Jon Stewart quizzed Janet Napolitano about (no surprise) national security. They laughed together about the color-coded Homeland Security Advisory System, which was replaced a couple of years later. In part 2 of the interview they discussed the then-raging swine flu, a topic which brought out Stewart’s hypochondriac nature. Ever diplomatic, Napolitano refused to pick her favorite Homeland Security department and instead talked about the challenges and rewards of the complex collaboration between all the agencies working against terrorism.

Then a journalist, John Miller appeared on The Daily Show in 2001 to talk about when he famously interviewed Osama Bin Laden in 1998. He and Stewart also discussed about Al Jazeera media, then a Middle East media station mostly unknown to U.S. audiences. Miller’s career has flip flopped between government service and journalism. He’s been Bureau Chief for the Los Angeles Police Department’s Counter-Terrorism and Criminal Intelligence Bureau, Assistant Director for Public Affairs at the FBI, and is now Deputy Commissioner of Intelligence and Counter-Terrorism of the NYPD.

Part of Assistant Secretary of Defense for Public Affairs Victoria Clarke’s job was to be charming, and she brings that to the interview chair in 2002. One of the interview’s best moments is when she reveals that Donald Rumsfeld is more a Felix than an Oscar. She also explains how she tries not to use acronyms because she needs to make defense and military decisions make sense to the media and to the American public. Except she’ll use the acronym “LRB” for the Little Red Button that can launch an attack. Her joke left Jon Stewart cheekily “frightened to death.”

Currently the Secretary of Energy, Moniz has also served as Associate Director for Science in the Office of Science and Technology Policy in the Executive Office of the President and Under Secretary of the Department of Energy. Earlier in 2015, Moniz talked to Stewart about the new Iran nuclear deal and the Obama administration’s plan to modernize transmission lines, pipelines, and aging infrastructure. Stewart somehow restrained himself from asking Moniz about his famous fabulous hairstyle.

You might remember former Deputy Assistant U.S. Attorney General John Yoo as the infamous man who wrote the Bush administration “torture memos” that were used as legal justification for the U.S.’s use of torture after 9/11. In 2010, Yoo was went on The Daily Show to promote his book, Crisis and Command and talk about executive power, none of which was of much interest to Stewart. As the conversation focused in on torture and al-Qaeda, Yoo deftly danced around Stewart’s efforts to “nail” him. Afterwards, critics slammed Stewart’s interview skills, with Stewart later admitting Yoo “slipped through my fingers.” It’s fascinating to watch Jon Stewart fail at something he usually did so well.

In 2004, Assistant Secretary of Defense in the Reagan administration and Chairman of the Defense Policy Board under G.W. Bush went on The Daily Show to promote his new book An End to Evil: How to Win the War on Terror. Watch Stewart talk so comfortably to Perle, even though Perle was one of the people Stewart lambasted as responsible for the U.S.’s mistakes in the Iraq war.

Not all interviews on The Daily Show have gone well for government agency heads. During one of the most painful phases of the Obamacare launch in 2013, Health and Human Services Secretary Kathleen Sebelius gave an interview that was later called a “trainwreck” and a “disaster.” It was odd that Sebelius wasn’t more prepared for the grilling since she’d been on The Daily Show twice before in 2009 and 2012. Even though Stewart is generally supportive of Obamacare, he was clearly impatient with the questions that Sebelius couldn’t or wouldn’t answer, asking her in exasperation, “Am I a stupid man?” Judge for yourself how things went down:

What’s your favorite interview from The Daily Show with Jon Stewart? Share it in the comments below.

Jon Stewart is going to be missed. And that’s from a guy who’s not a big TV watcher.

Ditto, Daniel. He was my daily fixation, at least 4 days a week!