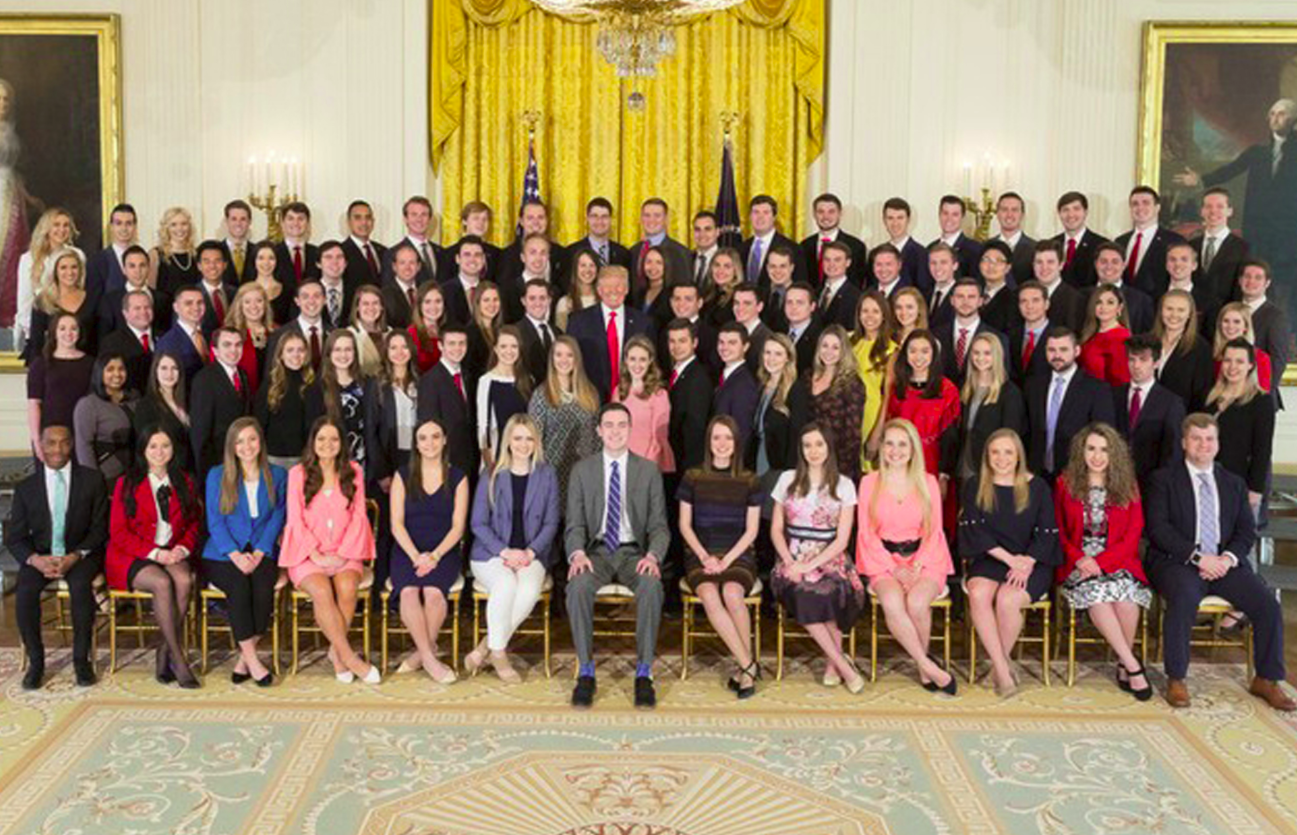 The Washington Post described the hiring headaches created by “the extent to which Trump demands loyalty” from potential new hires, resulting in “hundreds of national security officials” being “nixed from consideration because they spoke out against Trump.” Meanwhile, BuzzFeed News reported the “grim job prospects” for people who have worked for the Trump administration.

Talking Points Memo discovered “a full third of the senior Interior Department (DOI) career officials reassigned under Secretary Ryan Zinke in a major agency reshuffling are Native American, even though Native Americans make up less than 10 percent of the Department’s workforce.” And, after the White House released a photo of its new spring interns, the administration was criticized for the lack of diversity shown and for hiring practices that appear to favor white interns.

Trump issued an executive order creating a task force to evaluate the U.S. Postal Service’s finances soon after he posted a number of tweets criticizing Amazon, which ships many of its packages through the Postal Service. As NPR and others pointed out, while “the Postal Service has lost money for years…it actually makes money on package deliveries, with Amazon accounting for a large chunk of that.”

Advocacy groups are suing the White House to remove Robert Wilkie as acting secretary of Veterans Affairs, arguing his appointment violated federal law by bypassing the order of succession.

After Environmental Protection Agency administrator Scott Pruitt testified to Congress about his spending and other ethics issues, Politico characterized the mood at the EPA as “enraged and demoralized” because Pruitt blamed his aides and did not defend his staff.

The New York Times reported at least five EPA officials, four of them high ranking, were “reassigned or demoted, or requested new jobs” after questioning Pruitt’s spending and management of the agency. One of those staffers, deputy chief of staff Kevin Chmielewski, was placed on administrative leave without pay earlier this year, and has since turned whistleblower, saying Pruitt “bold-faced” lied to Congress.

To summarize the allegations, investigations, and scandal surrounding Pruitt would be a monumental task. Thankfully Politico has created a complete guide to it all. 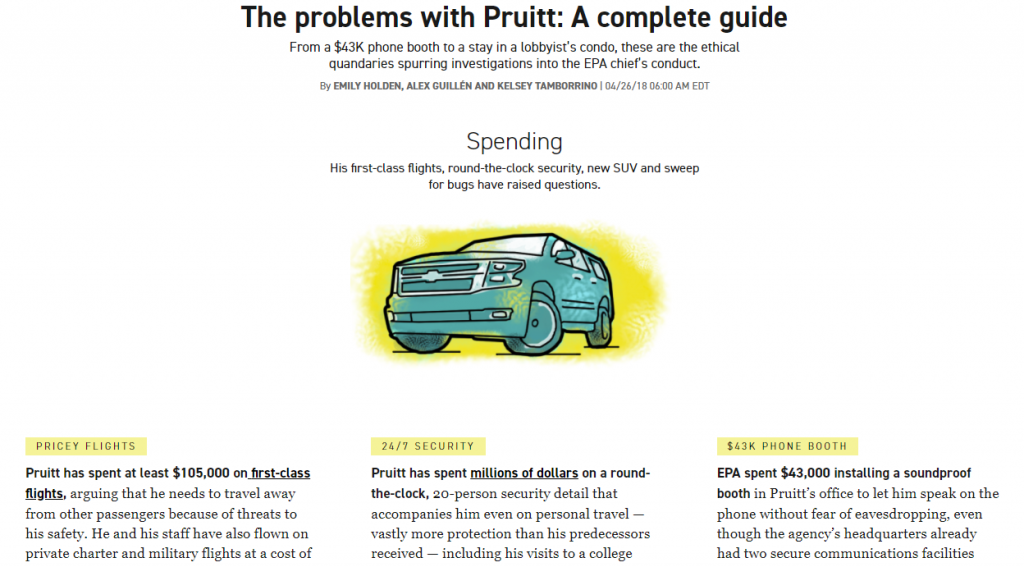 The Weekly Standard reported that this “Bolton purge” means that “Bolton is inheriting an increasingly demoralized NSC staff in a West Wing that has seen a higher turnover rate than normal, even for Trump.” Wired explained the loss of Bossert and Joyce “will slow the ability of the US to think about big-picture cybersecurity concerns” and CyberScoop described the situation at the NSC as a “power struggle…that will shape the fate of the nation’s cybersecurity posture.”

Just days after Mike Pence hired Jon Lerner, deputy to US Ambassador to the United Nations Nikki Haley, to take on a second role as his national security adviser, Lerner withdrew from the new role because Trump was “reportedly upset that a man who engaged in opposition research against him would be offered a prominent role in the West Wing.”

Todd Johnson, advance officer at the Defense Department, resigned after a CNN investigation revealed he had “posted birther conspiracies about then-President Barack Obama and shared a video that claimed Obama was the Antichrist.” Scott Blackburn, the acting executive in charge for the office of information and technology at the Department of Veterans Affairs, resigned for unspecified reasons. Thomas Homan, acting director of Immigration and Customs Enforcement (ICE), announced he will retire in June.

Samantha Dravis, senior counsel and associate administrator of the EPA’s office of policy and a top adviser to Scott Pruitt, resigned. The House Oversight Committee is investigating if Dravis didn’t show up for work for months. The EPA removed Mario Caraballo, deputy associate administrator of the EPA’s office of homeland security, who “approved an internal report that undermined Administrator Scott Pruitt’s claims that he needed around-the-clock bodyguards and other expensive security protection.” Pruitt’s head of protective detail, Pasquale ‘Nino’ Perrotta, accelerated his retirement after reports revealed his role in EPA spending decisions.

The Senate also confirmed Andrew Wheeler as deputy administrator of the EPA. The former coal lobbyist “rejects the science behind climate change.” Wheeler is first in line to lead the EPA if administrator Scott Pruitt resigns.

Trump appointed Susan Combs as acting assistant secretary for fish, wildlife, and parks at the Interior Department. Combs has a history of opposing endangered species protections.

The Senate pushed through many more confirmations in April, including:

Ronny Jackson withdrew as Trump’s nominee for secretary of the Department of Veterans Affairs. The nomination of Jackson, who had been Trump’s personal physician at the White House, surprised people within and outside the administration. After the nomination was announced, allegations were made by “current and former colleagues that Jackson overprescribed pills, drank on the job and created a hostile work environment.” Jackson will not return to his role as Trump’s physician. Trump has not nominated a new person as VA secretary.

The Washington Post and Partnership for Public Service nomination tracker report that 209 positions requiring Senate confirmation still have no nominee.

Note: This article not an opinion about or endorsement of any policies, regulations, or orders, nor of the behaviors of elected officials, political appointees, government employees, other individuals, organizations, or agencies.

This is a great roundup – thanks for sharing!

6 Ways to Optimize Your Digital Presence and Boost Citizen Engagement