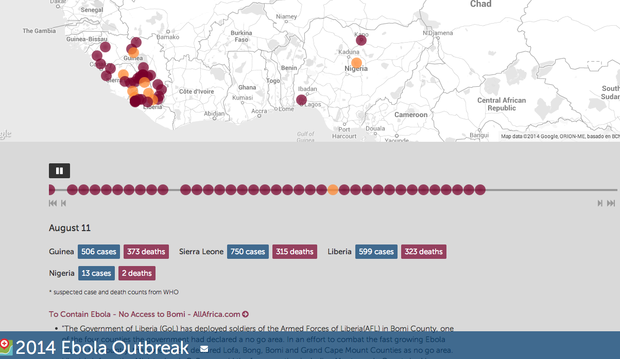 There’s a great article over at TechRepublic by Lyndsey Gilpin on how the computer algorithm behind HealthMap detected the recent Ebola outbreak nine days before it was identified by health authorities.

In How an algorithm detected the Ebola outbreak a week early, and what it could do next, Gilpin describes how by tracking, collating and corroborating information published in online news sources and social media, the algorithm was able to identify the ‘mystery hemorrhagic fever’ over a week before official health agencies.

However the significance of the outbreak was not realised by HealthMap founders until after health authorities got involved.

This type of use of internet ‘chatter’ and algorithms to make sense of the world offers enormous potential for organisations to better identify and understand underlying trends.

For government this means the ability to identify outbreaks of human, animal and crop diseases earlier, detect early indications of potential crises and trends in population views and behaviours.

In all these cases it gives government the opportunity – using only public sources of information – to react sooner and more appropriately, containing problems and getting ahead of issues.

Equally this capability can be used by commercial entities for marketing and product development, by financial organisations for faster and better informed investment decisions and by activists, lobbyists, foreign interests and terrorists to identify weak points for destabilising a nation or gaining advantage.

It remains early days in this area – not as early as when Google first released its flu map for Australia back in 2009 – but early enough that few organisations are, as yet, investing in this area (giving them a huge advantage over rivals).

However with HealthMap’s algorithms now successful at screening out over 90% of unrelated information, the value of using this type of approach in policy and service delivery has now reached the point of commercial viability, which should only accelerate investment and research into the area in coming years.

If Australian governments aren’t yet mining the public internet for intelligence to help improve decision-making, hopefully it won’t be long until they do – at least to contend against others who might use this intelligence for less than positive purposes.