On June 9, 2011, thanks to an amazing organizing team and the Canada School of Public Service, I attended Collaborative Management Day via webcast. 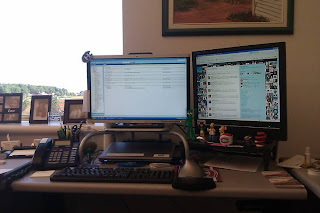 My viewpoint for the day.

This was an event by public servants for public servants. The day was packed full of guest speakers talking about different ways to collaborate and many of the tools and methods that are used across departments.

To me the day was all about sharing and moving forward as a strong public service. Twitter was used by participants near and far to share thoughts, opinions and pictures about what was occurring throughout the day. This online collaboration generated over 1000 tweets using the hashtag #GOC3 over the course of the event.

It was great to see people I know on stage presenting. Like Sean Kibbee talking about internal collaborative tools (GCForums, GCPedia and GCConnex) and Blaise Hebert speaking about “Virtual Engagement”. Both did an excellent job speaking about their roll and the tools that they’ve developed for collaboration.

One really neat moment was the debut of a YouTube video featuring Tanya Snook, Collaborative Management Day – Tanya Snook it’s a video that I feel every manager in the GOC should be encouraged to view. She talked about the “small wins that allow her team to make a little progress each day.” She also talked about giving staff latitude and trusting your employees, something that can sometimes be a difficult stretch for some managers especially when use of social media is a necessity of the job.

This video really made me think. I think that a lot of the time we feel as though we need to swing for the fence and hit it out of the park. But if you can consistently hit singles and the odd double you can end up with long and successful career. Hitting the odd one out of the park will likely get you some votes for the Hall of Fame!!

These types of events make me proud to be a public servant. I’m hoping that at some point I’ll be able to attend a future event in person. Until then I’ll keep in touch via webcast and twitter and continue to collaborate from a distance.

Kudos again to the organizing team and all of the speakers for putting together such a great event.

For Your Consideration: Facebook More “Private” Than Google+? A Closer Look Down the Rabbit Hole..