In a recent article, I highlighted some of the structural challenges that NGOs often experience in refugee situations as the need for humanitarian support shifts towards economic integration. This change in paradigm can be difficult for the traditional multi-coalition organizations to host while being pressured by governments to redirect resources towards protecting long-term economic sustainability.

The Colombian government has been increasingly communicating this shift in priorities as migration levels continue to grow and the economic burden of said population continues to weigh on fiscal stability and social cohesion.

The demographic distribution of the Venezuelan migration pool suggests that youth employment will become an important response challenge for the foreseeable future. The Universidad Catolica Andres Bello in Venezuela estimates that 80% of the migrant population is between the ages 15 and 49, and that 57% are between the 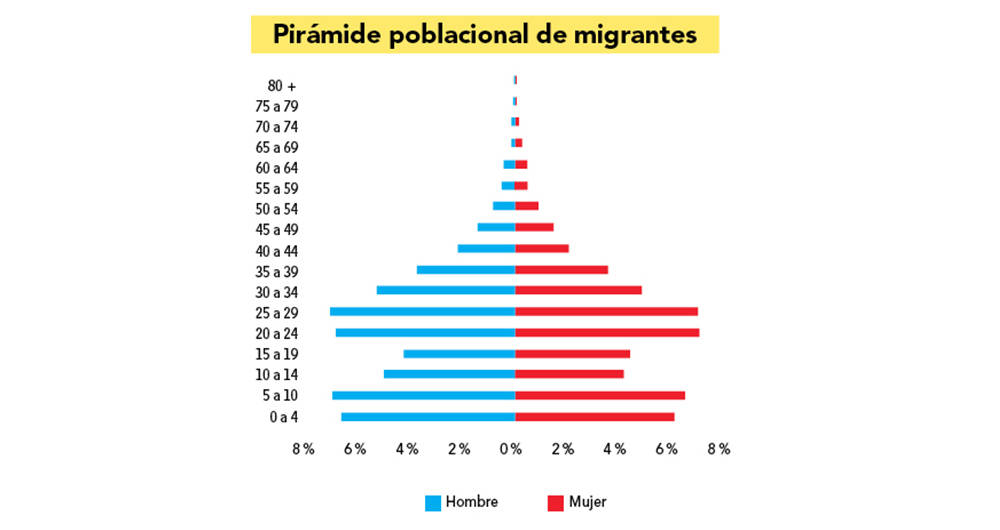 ages of 15 and 29 (Inojosa, 2019).  The age-pyramid prepared by Colombian migration authorities shows a similar pattern regarding those migrants that are staying in Colombia.

Because of the magnitude of the migration wave, there is a slew of organizations that have been exploring initiatives to integrate this potentially productive pool of migrants, and one of them is the introduction of Impact Sourcing (IS) businesses.

Samasource, one of the leading IS organizations in the world, defines IS as “the practice of supporting disadvantaged people to become employed in the business process outsourcing sector” (Chow, 2016). The IS business model is the creation of a traditional BPO service offering at comparable cost and quality, but differentiated by its specific recruitment of “unemployable” communities. The social impact model is based on the hypothesis that “exposure to formal work and fair pay can be transformative for the disadvantaged…” (Chow, 2016) and that the soft skills learned in IS organizations can work as a springboard into the formal economy.

The Rockefeller Foundation has financed dozens of research papers on the impact of IS in Asia and in Africa, and they have identified a series of guidelines for the most effective service-chains for IS businesses. While there are hundreds of services that BPOs offer in their traditional model, the most effective that IS businesses can consider include repetitive and volume-dependent skills that revolve around data-entry and conversion digitization.

The field of micro-work, which is the “breaking down larger digital projects into small, entry-level tasks” has become particularly attractive. As Giselle Gonzalez explains in her phenomenal dissertation for the University of Edinburgh, human interaction is still fundamental in the development of AI industries: “while technological advances have put AI, machine learning, and digitization at the forefront of innovation, human judgment remains essential to fill the gap of what technology cannot yet do…” (Gonzalez, 2019) and this is where IS organizations can thrive.

There are many criteria to determine which countries and situations are ideal for IS organizations, and there are many models and degrees of IS that can be considered. The situation in Colombia seems ripe for this industry to find a landing spot for several reasons. Three of the most evident are:

Despite the potential opportunity in introducing IS businesses to address the migration crisis in Colombia, there are many challenges that need to be brainstormed, particularly from a regulatory standpoint. Nonetheless, IS is already demonstrating impressive growth and business validation cases in different parts of the world in both non-profit and for-profit structures. It addresses two critical points of interception in the space of economic integration, namely the Lack of Opportunities and Unemployment/Income Inequality, that migrant and refugee recipient countries experience, and
therefore is an attractive model for further consideration.

You may also be interested in Guest blog: The emergence of digital microwork among forcibly displaced people: lessons from Iraq and Palestine and Aid Budgeting and Social Impact.

Gonzalez, Giselle. 2019. The emergence of digital microwork as a tool for sustainable human development among forcibly displaced people.