Treasury’s Bureau of the Fiscal Service has taken another step in advancing federal spending transparency by providing agency congressional justifications on USAspending.gov, connecting the dots between money and mission in the federal government. USAspending.gov, the official source for spending data for the U.S. government, displays what the federal government spends each year – tracking funds from their appropriation to the federal agencies and down to local communities – in a user-friendly, machine-readable, and publicly accessible format.

Now, when users explore a federal agency profile on USAspending.gov, they will not only see its budgetary resources, but can also quickly navigate to that agency’s congressional justification document. Congressional justifications reflect the President’s budget requests and include agency priorities, budget levels, and performance plans. Exploring agency budgetary resources in tandem with agency priorities and performance plans provides users with a more complete and contextual picture of an agency’s performance and impact. 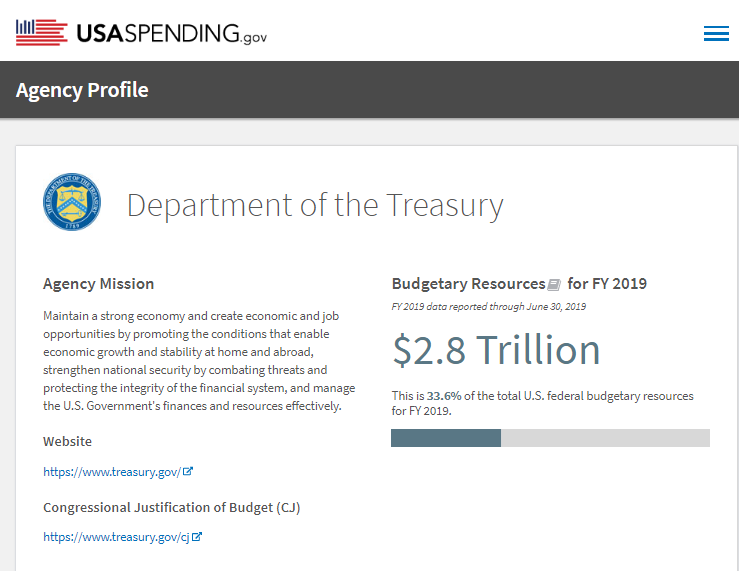 Users can easily access agency website, mission, budgetary resources, and congressional justification all in one place. When you scroll down the page, you can see interest on the public debt and refunding internal revenue collections are the primary federal accounts that contribute to Treasury’s budgetary resources.

Since the implementation of the Digital Accountability and Transparency Act (DATA Act) of 2014, USAspending.gov users have been able to see federal spending at various levels, such as by budget function, as well as more granular levels, such as a specific award and award recipient. But what priorities or strategies are driving these spending patterns? Congressional justification documents can help answer those questions.

“The next step is standardized and machine-readable congressional justifications whose data can be brought to the site directly instead of just linked to,” said Ross Williford, Treasury employee and Product Owner for USAspending.gov.

In an agile approach, teams are committed to continuous improvement. This iterative nature is what guides Treasury to keep enhancing USAspending.gov based on user and stakeholder feedback.

In addition to adding congressional justifications, the team has recently added a city filter to the website’s advanced search feature, enabling users to search for any city and learn what federal funds flow there at any given time. The team will also soon be adding Treasury Account Symbol (TAS)/Federal Account filtering to advanced search, connecting award data back to account data.

Continuous feedback and stakeholder engagement enables Treasury to add powerful new features and functionality to USAspending.gov. The addition of congressional justifications and other recent changes help provide a comprehensive view of federal government spending, advancing Treasury’s goal of transparency and accountability to the American taxpayer.

Matt Garlipp is a Program Analyst with the Bureau of the Fiscal Service, U.S. Department of the Treasury, and was formerly a content fellow with GovLoop.

This is a cool update Matthew! Citizens will hopefully find it very useful and take frequent advantage of it.

When are we doing to stop using the word “citizen”? I know in my training that word should be replaced as “community”