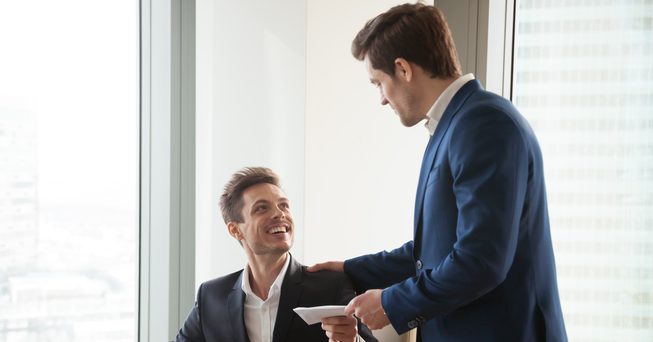 >> Hey there, GovLoop reader! Looking for more reading, inspiration, or to learn more about what’s awesome in government today? Download our new and free Top 30 Government Innovations of 2017 guide today.

Motivation comes in all kinds of shapes, sizes and approaches. Unfortunately, regardless of what method is used, it’s often delivered in a one-size-fits-all approach. But as the title of this post suggests, what motivates you may not motivate me at all. So the effort becomes a hit or miss exercise and can leave leaders bewildered as to why employees don’t respond as expected.

Money is often used as a motivational tool, whether to get people to stay in the workforce, to get them to leave early or as a reward for a job well done. Guess what? Money is not the driving force for many people in your organization. Don’t get me wrong, they will take the extra money  – and so will I. But what motivates people differs significantly from one person to the next, and can even be based by what is going on in a person’s personal or professional life.

Our organizations are diverse. Besides the differences in race, gender, age and other demographic and equal opportunity categories, there will be varying levels of experience, financial and marital status and a host of other factors that make us different from one another. And face it, we’re all individually wired, regardless of how we look and how we are made. Our needs and motivators are equally different, so if we use a wide brush in our efforts to motivate and reward people, we’re going to miss the mark often.

Great — we’re all different! So what’s a leader to do? At the supervisory level, it starts with knowing your people. It begins with the understanding you can’t mirror image to the point where you believe everyone will respond the same way you do. Years ago, I had a gentleman who worked for me who was an outstanding technician and an effective first-line supervisor. He took great care of his employees, and in turn, I wanted to show him my appreciation. I figured everyone enjoys time off, so I offered him some time away from the job. He quickly asked if he could give it to his folks instead. That’s not what I had intended, so I told him I wanted to reward him for a job well done.

Turns out, giving this particular individual time off was a non-motivator. His home life wasn’t all that great, so more time at home was like a punishment to him. He was motivated by the job, by responsibility and by caring for others. Just because other people in the organization would’ve given a kidney to have a day off didn’t translate into that being a motivator for him. It was a great lesson and reminder to pay attention.

What I have found over the years is it’s usually the small things that motivate people and helps build trust. Simple things like getting out from behind the desk and having conversations and building relationships. Things like knowing who has children and who doesn’t. Things like recognizing good performance, birthdays, team accomplishments and a host of other activities that cost nothing — but reap rewards. But there’s not enough time! I hear that often. I guess it depends on what you’re willing to invest in and what you hope your time investments will yield.

Bear with me for one more war story. When I was a Lieutenant in the Air Force, I was a section chief and had close to 40 people in the section. To show appreciation to my folks, I started recognizing people in an informal way. If someone did something well, I would leave the soft drink of their choice on their desk with a little yellow stickie note saying something like, “Great job on the readiness report. BKS” I think the drinks from our snack bar were a quarter each, so this was really inexpensive and didn’t take more than a couple of minutes of my time.

It wasn’t a big deal, and quite frankly, I wasn’t sure how much impact it was having. After doing this for about six months, one of my branch supervisors, a Master Sergeant, came to my office and asked to speak to me. After sitting down, she asked me if she was doing a good job. I was rather astonished, because she was a stellar worker and her branch always performed well. I let her know unequivocally she was doing a great job. After a few quiet seconds passed by, she said, “But I’ve never gotten a Pepsi with a stickie note.”

To be honest, I had targeted the younger folks in the section, because I thought they would be more likely to respond positively to this form of recognition. But what I was really doing was giving a stamp of approval by this small gesture, and I had overlooked someone, thinking it wouldn’t matter. What a great lesson to once again learn. The little things do indeed matter, and by not including the Master Sergeant in my informal recognition, I caused her to question my perceptions of her quality of work.

Leadership is complex and meeting everyone at their needs is a difficult undertaking, especially in large organizations. But that doesn’t mean we shouldn’t try new things and be intentionally personal as we go about it. Listening to people and caring about them are great starting points. And along the way, it will often be the little things, like a cold Pepsi and a stickie note that will have the most motivational impact.

Great post, thanks for sharing! Excellent use of personal stories to drive the point home.

Thanks Brady. Our collective stories…successes and those pesky non-examples, can be quite helpful!

I resonated with the Pepsi & post it note story. Particularly appreciating the Master Sergeant’s follow up on her performance. As a Boss, its hard to read people’s minds about what they do and do not appreciate.

We use a quick ‘personal celebration and recognition’ survey for our team. It has basic questions
about preferred recognition – public vs. private, inclusion of supervisors, preferred training opportunities, how people feel about surprises. Good to get a feel for the team. I like the structure of the feedback gathered with the survey. With one caveat- some staff have limited experience with recognition. Its worthwhile to do some low-stakes testing. I’ve seen staff go from rolling their eyes to eager to participate.

Carmen would you mind sharing your survey questions.

Such a great post and wonderful reminder to stay tuned in to what matters to individuals on our team.

Thank you Megan. It’s easy to get trapped in the fast pace and task lists. We need to make smart investments with our time and efforts, but if we want long-terms impact, we need to get to know our folks!

Another winner article form BKS. Thanks!

Thanks for a great post! The Master Sergeant was particularly brave to approach you with her concerns and to be honest about her feelings. I can see where lesser mortals might not have the courage to talk to the boss, and only after they leave, do you discover why.

Thanks Mary. I agree with your sentiments…courage/bravery is needed in both leadership and followership.

Thank you for sharing these personal stories. It really is the little things that make a huge difference.

This is such a great post! I really appreciate the real-world examples and totally agree that listening to people and caring about them are great starting points. And you can make someone’s day with such little gestures – including spending just 25 cents on a soda! Thanks for the reminder.