In last week’s blog, options beyond the automobile were offered: Metro (bus and rail), local bus, walking and biking. Planning (and implicitly, mapping and/or navigation) were stressed as űber important to perform prior to departure. Unless your navigational abilities match the Monarch butterfly’s (mechanism still unexplained: three generations return north along the single generation’s flight south), you’ll want help.  Maps (and other navigational options), in 2017 come in a dizzying array of choices: paper, digital and/or cellular.

Mostly still available in paper formats (and often as PDF files for the digerati), timetables (often with route maps) offer a schedules for when to expect the bus. Timetables for Metro bus are on the Metrorail station kiosk wall holders and within the busses themselves, but the bus holders often offer air (empty) or routes elsewhere (e.g., I’m on the H6 Brookland / Ft. Lincoln loop and the only schedules are for the {30, 32, 36} set).  Some Metro bus stops still feature a timetable affixed to the post, however, most are quite dated if even still legible. At WMATA’s site, you can download Acrobat files for each route; these are digital scans of the paper product, not schedules for each stop or better resolution of the bus’s service area.  Like Metro, most of the local bus services offer digital versions of their timetables on their sites.

Cellular (or app) uses GPS to determine your position, show your position on a mini-map and tell when the next option leaves. There are many vendors offering free and some paid versions.  Two I’ve used are shown below: 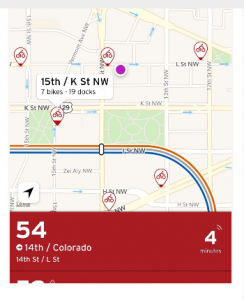 Transit shows approaching busses and fixed locations: here the 54 bus to 14th & Colorado will be at 14 & L in 4 minutes.

Transit (by Transitapp.com) offers a sleek interface and shows most of the DC area’s transit options, with bike and car-sharing shown (also includes Baltimore).  Product is offered in Android and iOS versions.

Before a fellow rider suggested Transit, I used DCMassTransit for a number of months. This iOS only app also omits the Prince George’s County “The Bus” and has but three data sources: WMATA API: https://developer.wmata.com/license, NextBus Feed: https://www.nextbus.com/xmlFeedDocs/NextBusXMLFeed.pdf, and Capital Bikeshare: http://developer.motivateco.com/

Users will like that stops within 0.75 miles are included but may need to change the direction of the route (it doesn’t always correctly identify your stop) to get the desired information.

Getting around (and returning safely home!) are aided by apps and even analog maps in 2017.  Be sure to bring at least one along!