As some may have already read elsewhere, Tim Samaras, along with his son Paul Samaras and colleague Carl Young, were among the at least 13 confirmed fatalities of an EF-3 Tornado that struck El Reno, OK on Friday, May 31st. Tim was a well-respected member of the storm chasing community lauded for his outreach efforts and emphasis on safety in chasing. He was also a record-breaking researcher and true innovator in the field of tornado and severe weather data collection and instrumentation. These fatalities are being discussed in the meteorological community as an “Everest Moment” for storm chasing.

[UPDATE:The death toll from this event has risen to 18, including a fourth storm chaser who was considered an amateur/chasing enthusiast. Additionally, the official rating from the NWS is an EF-5, the strongest classification for a tornado. Observed wind speeds were up to 300mph and this was the widest tornado ever measured since records were kept–2.6 miles across at the widest point.]

Out of this event I seek to raise an important local policy question for consideration: Is there a demand for regulation in this field?

As a knowledgeable weather hobbyist I have had numerous discussions with friends and co-workers about the topic of storm chasing. I had always personally planned to go on a “Chasing Vacation” until 2010 when a school assignment led me to uncover a dangerous condition in the chasing community known as “Chaser Convergence” (see a great interview on The Weather Channel that was later removed from their website). Surprisingly, I was just telling friends that there had been no known fatalities from storm chasing, yet we all agreed it was only a matter of time, and that nothing would likely be done to curtail this reckless behavior until it proved fatal.

That all changed on the road in El Reno Friday. Reports indicate that as many as 10 of the fatalities occurred in vehicles on congested roads. Many may have already seen reports of Mike Bettes and The Weather Channel crew chase vehicle was tossed approximately 200 yards by the storm. The radar image of the tornado circulation below shows just how many chasers were in the path of the storm. Each red dot represents a chase car and the tornado is indicated in the image at the location where the blues/greens meet the deep red colors. 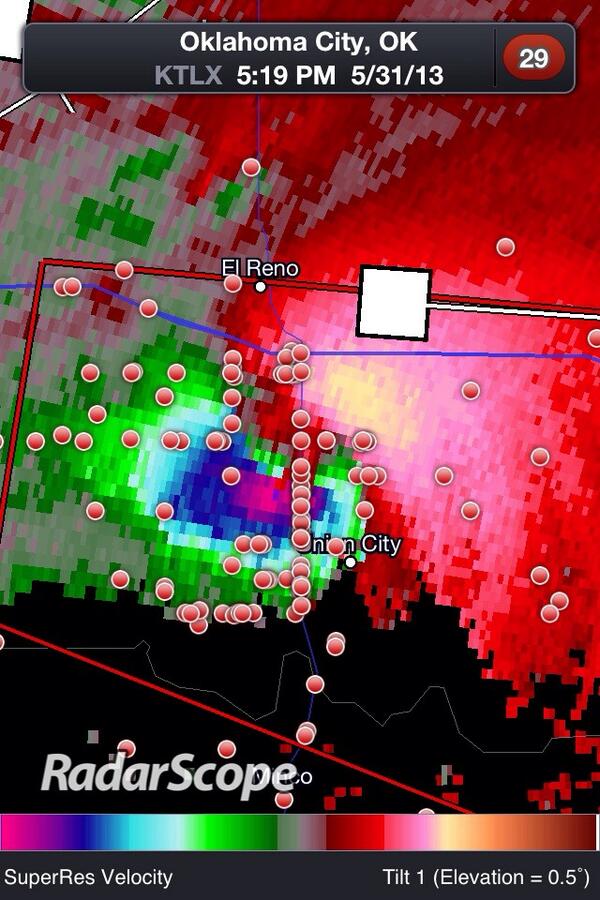 This indicates a tornado with a wide circulation and one that is known to be particularly dangerous due to its’ unpredictability in direction. The location of the storm near a population center as well as the timing of impact as rush hour all contribute to create a setup for disaster. I am of the opinion that the type of GPS technology and software which allowed for the image above could be leveraged to create a licensing system for tornado chasers and researchers to reduce the crowding and congestion and mitigate known risks.

However, the question remains if there is the drive to regulate and the means–financial and otherwise–to enforce such an effort. Short of regulation, communication and public outreach activities could be used to deter chasers from repeating these actions. Hopefully saving lives in the future while continuing to collect the important data to support severe weather research.