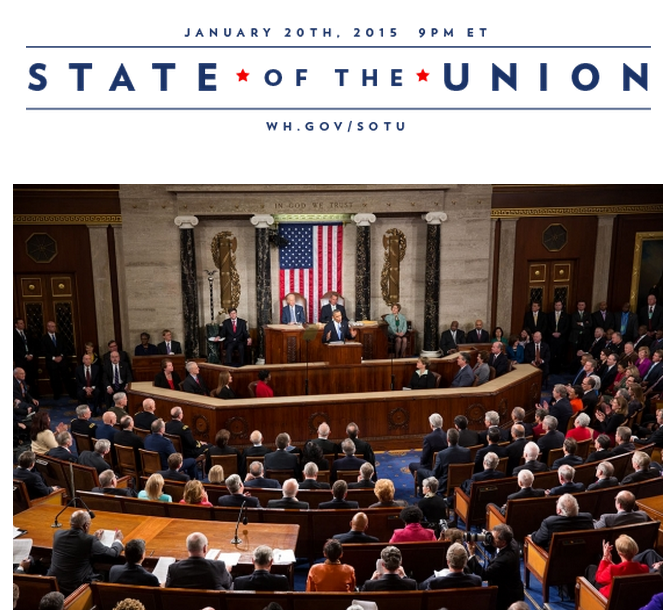 Usually, the State of the Union topics are strictly hush-hush, kept secret until the live broadcast. This time around, the White House has upended the norms, sharing spoilers on several of the issues that President Obama will cover.

To help you impress everyone at your State of the Union viewing party, here’s a run-down of two initiatives Obama has already previewed that will be hot conversation topics with government agency workers. As to whether these proposals are on the mark, we’ll leave that to the politicians to debate.

If you’d prefer the 2015 State of the Union to be a surprise, stop reading now because there’s spoilers ahead.

On the same day that Islamic State sympathizers took brief control over a government agency’s social media accounts, President Obama shared the first spoiler about the upcoming State of the Union: cybersecurity.

In the days since announcing this priority, the White House has been pumping out details about proposed legislation and executive actions designed to improve online privacy and cybersecurity. While these plans are primarily intended to protect people and companies from cyber attacks, if enacted, they’ll involve government agencies as well. One proposed legislation would provide liability protection to companies that voluntarily share information with the government about cybersecurity. The data would be shared primarily with the Department of Homeland Security’s National Cybersecurity and Communications Integration Center and potentially with other “relevant” government agencies.

A prognosticator of policy, GovLoop featured blogger David B. Grinberg declared the need to strengthen cybersecurity the #1 public sector priority for 2015. Here are some useful GovLoop resources on cybersecurity:

Following the State of the Union, the White House will host a cybersecurity summit on February 13.

The lack of paid parental leave for federal employees has been on Obama Administration’s radar for years.

Part of a larger set of family and sick leave initiatives announced in advance of the State of the Union, the White House said that Obama will sign a presidential memorandum giving government agency employees up to of six weeks of paid sick leave to care for a new child. Workers could use this leave to care for a newborn baby, or a newly adopted or fostered child. Obama economic advisor Betsey Stevenson told reporters that “workers would be required to pay back the sick leave over time.”

Additionally, the president will encourage Congress to give federal workers another six weeks of paid parental leave.

In the announcement, White House senior advisor Valerie Jarrett wrote, “The President intends to ensure that the federal government is a model employer. We’ll have the most-skilled and productive workforce possible as a result.”

Tips for Watching the State of the Union

When: President Obama’s sixth State of the Union address is on Tuesday, January 20 at 9 p.m. ET.

Where to watch: Count on all the TV news networks to show the President’s address with plenty of highly opinionated commentary. For all you cord-cutters out there—or for those who want to tune out the political bickering—the White House will stream an “enhanced version” of the speech at WhiteHouse.gov/SOTU.

Social media: The tweet-inclined can comment along using the hashtags #SOTU and #SOTU2015, and hone in on issue-specific conversations with the hashtags #cybersecurity and #paidleave.

Excellent rundown! May just visit the White House stream to avoid all the yapping during the address. Really hoping paid parental leave for federal employees finally gets approved. I was shocked when I became a federal employee and I found out we didn’t receive this.

Glad I could help, Dijon!